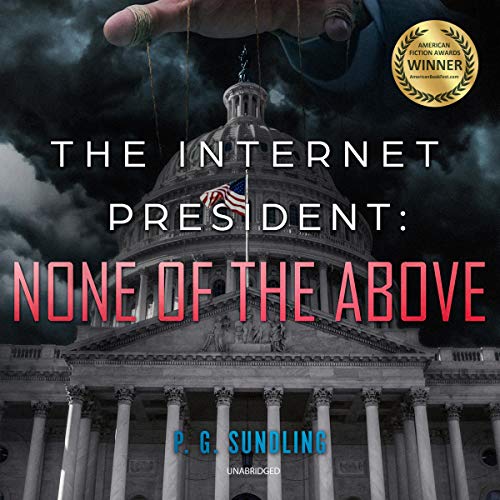 The Internet President: None of the Above

This award-winning novel blends action, comedy, drama, romance, and politics in an unconventional story that will keep you guessing.

James Wong built a billion-dollar software company with his childhood friend, Maria Cortez. He had everything until an ultra-rich investor stole control of his company with a shady contract. How do you fight the rich and powerful? In a video game, he would use a power-up to defeat the villain. Maria tells him there aren't power-ups in real life, but James finds the ultimate power-up: become the president.

They must uncover secrets about their company, themselves, and the dark forces aligned against them. As the world falls apart around them, it will take every ounce of Maria's strength and every crazy idea James can muster to get their company back.

You have to wonder if PG Sundling has a crystal ball. This is an adventurous journey into the depths of politics, corruption, and love. I found myself many a day sitting in my car way after reaching my destination; not wanting to stop listening to this book. I would actually love to see this turned into a tv series. Until then I am left waiting for the sequel.

love it! page turner u can't put down😍

I can't get enough of this book. The narrators make the book seem more alive and like I'm watching a movie . i just got lost in this book and enjoyed every minute listening to it ! I ended up binge reading b/c I just had to know what happened next. I really don't want to write spoilers ,but the way it starts off with Maria seemingly double crossing James *squeels* can't tell u anymore I'll say this i want a powersuit too 😁. u just have to read it !! . You're r gonna love this story as much as I did. I especially loved the detail the narrator did in ch 74😍 ! Rereading a third time now 🤓

A gripping tale of intrigue and politics

A fast pace story of man vs the political machine, experience the highs as lows of an individual doing his best to make the world a better place. The Internet President: None of the Above is a refreshing tale of hope and different modes of thought to solve may of the problems that plague society. It was a great listen and will leave you wanting the next installments.

Something that motivates me to go to the gym!

First chapter doesn't measure up to the rest of the book, but it is important to setting up the scene. Thankfully the book quickly picks after that. The narrators do a great job conveying the nuances in the sentences and give a lot of vibrancy to the story.