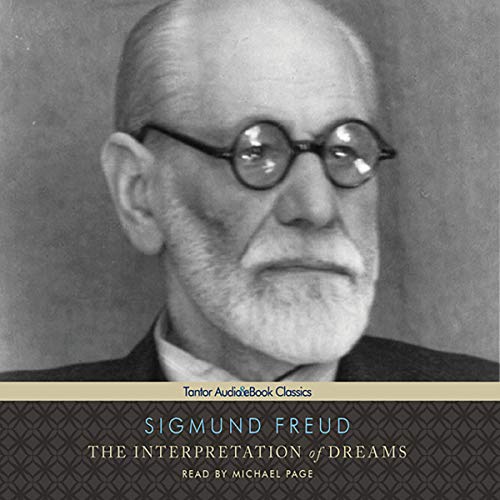 The Interpretation of Dreams

What are the most common dreams and why do we have them? What does a dream about death mean? What do dreams of swimming, failing, or flying symbolize? First published by Sigmund Freud in 1899, The Interpretation of Dreams considers why we dream and what it means in the larger picture of our psychological lives.

Delving into theories of manifest and latent dream content, the special language of dreams, dreams as wish fulfillments, the significance of childhood experiences, and much more, Freud, widely considered the "father of psychoanalysis", thoroughly and thoughtfully examines dream psychology. Encompassing dozens of case histories and detailed analyses of actual dreams, this landmark text presents Freud's legendary work as a tool for comprehending our sleeping experiences.

What listeners say about The Interpretation of Dreams

My profound predecessors in the field of Psychoanalysis—Drs. Yalom and Fromm—progressively prevailed upon me to take the expositions of Sigmund Freud seriously. I have endeavored to do so and I am heartily sorry for my assent. At the risk of repeating was is assuredly obvious to any informed observer familiar with Freud’s writings and his character as communicated by contemporaries and chroniclers, the ‘Master of the Mind’ was not nearly in control of his own cognitions. Not only did Freud suffer from extreme anxiety, he erected his therapeutic edifice upon the pathological primacy of anxiety and acknowledged his inability to understand (or overcome) anxiety as an unalloyed embarrassment. To those who regard meaningful interpersonal relationships as indispensable to optimal psychological health, it is saddening and shocking to see how many friendships Freud ruined, how many collegial relationships he destroyed with his despotic doctrinarism, his irrepressible personal ambition and easily-aroused enmity. Perhaps a person justly convinced of his greatness can be excused for exhibiting excessive ambition. But we must maintain that it is the mark of mental imbalance when one’s own aggrandizement can only conceivably come at the expense of others, by questioning their intrinsic worth and contemning their contributions.

Even this cursory catalogue of Freud’s character suggests a mind maladapted to social life, if not inherently ill. Forsooth, Freud is fitter for pity than praise. Such pity must be circumscribed such that it encompasses the particular person of the dread doctor, not the perspective that his perplexed, impassioned ideations unleashed upon a still astonished world. For there is something especially absurd in the idea of an individual with an evident psychological impairment imperiously opining upon the proper understanding and treatment of such impairments in others. Lest we stray too far from the focus of this review, let us turn our attention to the topic of Freud’s central theory of dream interpretation. Happily, there is not much to mention: Dreams are expressions of unfulfilled wishes, substantially sexual in essence and shrouded in symbolism accessible only to the enlightened analyst or “initiate”. As with so many Freudian fragments, there are elements of truth herein. Clearly some dreams are ‘teleological’ in nature, enabling one to realize in fantasy an end that eludes us in reality. Clearly, however, many dreams display a disorganized array of psychological scenes and sentiments stemming from rather random mental activity in a brain that is active even during the depths of slumber. Freud forthrightly dismisses as erroneous this last notion of the nature of dreams. Fair enough. But he fails (as usual) to defend his dismissal with substantive countervailing evidence and argument.

Confessedly, the Author can claim some competence in the domain of drug abuse treatment, having practiced and published in the field. This proclamation of aptitude in the area of addiction adds, perhaps, particular poignancy to my criticism of Freud. It is altogether astounding that the founder of modern psychotherapy was not only an addict but advocated the utilization of illicit opiates. Having persuaded patients, family, and friends to partake of such dangerous agents (presumably, perhaps, before their noxious nature was widely known) and witnessing the inevitable addiction, anguish, and even death it induced contributed conspicuously to his guilt. In the Interpretation of Dreams, Freud related a dream of his revealing (ostensibly) the existence and repression of guilt for directly contributing to the destruction of the lives of intimate relations and others owing to opiate addiction to which they were initiated by him. Instead of openly acknowledging such guilt, making use of the intellectually defensible “defense mechanism” of repression, he sought to erect his entire explanatory edifice of the origin of dreams upon the whimsical notion of “wish fulfillment”. It was not his dream that fulfilled a wish. Rather, it was his entire intellectual life that reflected Freud’s unwholesome hunger for greatness, his quest for intellectual immortality. While such intellectual immortality is an elusive ambition, the thought of Freud unfortunately dominated an entire era and lamentably lingers even in our own age. Given this doctrinal domination by the often absurd ideas of an individual who acknowledged suffering from inscrutable angst, exhibited evident delusions of grandeur, and was plagued by an Addictive Disorder that he was patently powerless to overcome, it is no wonder why psychotherapy is perpetually ineffectual in its ability to effect fundamental change in the lives of people and why interventions aimed at the amelioration of anxiety, depression, and addiction are so woefully inadequate. It is simply scandalous that 20th century Psychology was so enamored with the wayward ideas of Freud (and many of the misguided musings of Marx) while Physics was constructing the cornerstones of Quantum Mechanics and modern Cosmology. As a Biological Theorist, I derive some defensible delight in the fact that Darwin’s doctrine looms larger than the fatuous phallic fallacies of Freud and have contributed to the conceptual clarity of mankind in myriad ways. [And though the demon of anxiety did not depart from Darwin either, at least he did not deign to discourse on his expert understanding of its origins and alleviation as did Dr. Freud.]

It is also refreshing to realize that not all intellectuals of the era of Freud were fooled by his formulations. For consider this intelligent allusion to the ‘Immortal Analyst’ by the effusive Historian, Dr. Will Durant, on the endurance and dubiousness of dream decipherment:

“The gravest medieval historians nearly always found (like Livy) that important events had been directly or symbolically foretold by portents, visions, prophecies, or dreams. There were heaps of books...offering the latest scientific interpretation of dreams (oneiromancy)—not much sillier than those which famous scientists have written in the twentieth century.” (The Story of Civilization, Vol. IV, p. 987)

If only it were possible to predict with perspicacity the future of Freud’s formidable influence upon the profession of Psychotherapy and mental health as a whole. If only more Analysts were inclined to abjure their imagined indebtedness to the intellectual obfuscations of Freudianism and avail themselves solely of reason and rigorous observational and experimental research in their effort to serve as sound psychological guides for a populace that continues to expect clarity and contentment to accrue from the insights of able counselors.

best book of all time

I love chapter vii, especially the scene where the body is burning

you have to listen to it

WOW, this is A LOT of information to digest!

What did you love best about The Interpretation of Dreams?

I enjoyed learning more about Freud and his perspective, especially when it comes to dreams. I find myself much more drawn to and accepting of Carl Jung's views, but I specifically wanted to understand the differences between these two great thinkers!

This is NOT light entertainment, but I believe it is a necessary read for those interested in deep psychological/spiritual development and understanding ... even if by the end of the book you are convinced you aren't a Freudian.

Antiquated by a nice view into Freud's thinking.

Would you listen to The Interpretation of Dreams again? Why?

I would not listen to this book again, but it was worth one listen. I think one of the reasons it may have been so popular is the scandalous stories that are included. Freud does not fail to take liberties in making connections from just about everything to libido. What surprised me was the careful attention paid to prior thoughts and research about dream.

Not bad for a hundred+ years book!

The theme is one of the most challenging and interesting there is!. Freud and his theory of psychoanalysis revolutionize the modern society as a thinking, evolving body. This is must listen to any one caring for the basics of modern life. The audio is well narrated and keeps you interested.

A great classic book by the most well known analyst, a must have for students or anyone with any interest in the subject. General reference book that should be in anyone interested's library

Historically interesting, but not useful. Skip it

Freud's very long work is interesting from a historical perspective, in that he and it were prominent fixtures, but it has not been useful to me as a listener. The text is way, way too long, and communicates way, way too little information. The information that it does communicate ranges from obvious common sense (to the modern listener) to unhelpful subjective myopic anecdotes interpreting individual dreams of particular people with interpretations that are not otherwise applicable to the population at large.

Love Freud, narrator not so much

I love the content, the breakdown of the unconscious is very interesting! The narrator's monotone voice has me struggling to finish . I tried to listen to this while commuting and had to switch books because the voice has a sedating effect. I think this book is better on paper than audio.

many good view points, many opinions, thorough work, only to leave you asking more questions

This book was wonderful and a paramount staple for the western thought. I really liked this book.

Fine, but not really a book for public consumption

This is only available as an audiobook because Freud has a profile in popular culture. It's, essentially, an academic text - and an archaic one, at that. It certainly isn't 'entertainment'. Not given its running time of almost 22 hours, and its more than occasional repetitiousness.

I'm kinda on the fence about Freud. That he was a very intelligent, imaginative man is beyond doubt. Many of the insights revealed in the studies contained herein are thought-provoking, and make a solid case for his particular take on the interpretation of dreams; but some of his 'insights' do not properly warrant the term - they're ludicrous, genital-obsessed nonsense.

(I hope Audible will forgive my using the word 'genital' in this review; but then, if they're gonna sell Freud on their website, they are rather asking for it...!).

It would be entirely possible for a celebrity psychologist/psychiatrist to collate and present a summary of Freud's take on dreams entertainingly. Knock it together in a single seven-hour audiobook and - boom! Job done, so that Joe Public can satisfy his curiosity without having to soldier through this blizzard. It really is a pain, in places.

So, in a nutshell? Fine if you're a student/hobbyist of psycho-analysis. If you're just interested casually in how Freud interpreted dreams, look it up on Wikipedia or something.