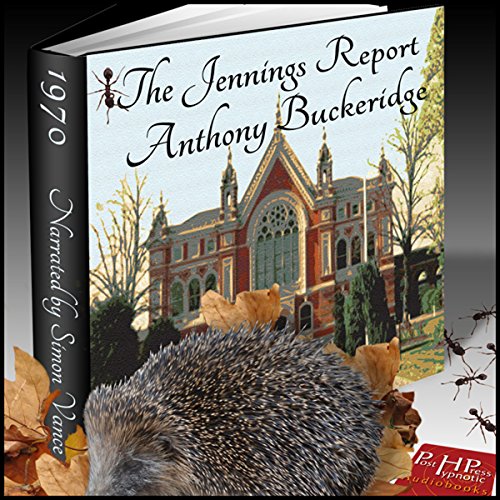 When Jennings and Darbishire discover a hibernating hedgehog they are instantly intrigued. Then, when Venables tells him that foxes eat hedgehogs, Jennings decides to rescue it. But things rarely go as planned for Jennings, and after a series of mishaps involving Miss Thorpes puppy and a bottle of 'Ants Anti-Escaping Fluid', Jennings is left wondering whether Old Sleepy will make it through the winter. Clueless clodpoll!

The Jennings Report is one of a series of 25 books by Anthony Buckeridge. The Jennings stories originated in a series of radio plays for the BBC’s Children’s Hour, which proved so popular they spawned this delightful series of books. The tales make liberal use of Buckeridge's inventive schoolboy slang ("fossilised fish hooks!," "crystallised cheesecakes!," and others). Published between 1950 and 1989, these books were favorites among a vast assortment of kids all over the world.

Jennings Goes to School and Jennings Again! were adapted for radio by Anthony Buckeridge and read by Stephen Fry, and Mark Williams (Aurthor Weasley in the Harry Potter films), recorded an abridged version of Jennings Little Hut, all produced by the BBC. Loved by kids and adults alike, the Jennings books were translated into several languages and have sold over six million worldwide. Described as “Harry Potter without magic, but funnier,” and “P.G. Wodehouse for kids,” you’ll want to check out the other titles in this series available from Post Hypnotic Press.

A sweet story of childhood adventure

Originally published in 1970, this tale of schoolboys reads as if it were written in the 1930s. Yes, there are television aerials and other signs of more modern times, but the slow pace of life and sources of adventure speak to a quieter, more innocent era.

The hedgehog fares well under the care of a gaggle of well meaning students, while the teachers are more likely to be befuddled. This is 19th in a series of 24 books. It is the only one I have read/listened to and I did not find that to be a problem.

This story is well suited to being shared by children and parents. There is nothing threatening or frightening in the book.

As captivating now as when I first read.

I read some of the Jennings books when I was 12 years old (45 years ago) and this charming and beautifully written story still captivates me. I had not read this story before and am delighted to have discovered it. I think I have heard Anthony Buckeridge's writing as PG Woodhouse for children. The only disagreement with that is that now as an adult I find it just as funny, so not just for children. It actually made me laugh out loud in many parts. The narrator is excellent and I am only sorry that I have now downloaded and listened to all that are available on Audible and wish that they could release the whole series.

Another mint title in the series!!

Each and every one of these Classic Children's books should be on everyone's reading Bucket list. Trust me, I'm a TimeLord.