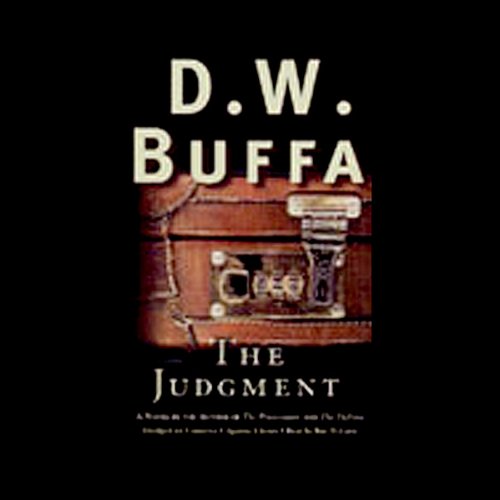 No one had a more brilliant legal career than Judge Calvin Jeffries. And no one cared less about the law and more about power. That is, until Jeffries is found murdered in a courthouse parking lot. The crime shocks the community, but justice is swift. Jeffries's killer is caught, confesses, and then unexpectedly commits suicide in his jail cell. The case is closed.

Soon a second judge is stabbed to death under identical circumstances. And like the Jeffries murder, the killing appears to be an open-and-shut case, and a copycat crime as well.

Yet there's one attorney who knows both sides of Judge Calvin Jeffries too well to believe the murders were simply random acts of violence. Attorney Joseph Antonelli agrees to defend the accused. What he discovers challenges everything he knows about crime and punishment...and himself. He uncovers a twisted trail of retribution and obsession that leads to the real killer - and a plan even more chillingly flawless than the mythical "perfect crime."

What listeners say about The Judgment

The Judgment is an excellent book - and a captivating audible! While I will admit that I figured out "who dunnit" about half-way through, I loved the depth with which Buffa told his story. The first two sections (telling Antonelli's first encounters with Judge Jeffries) and that of Elliot Winston were remarkable. The book totally draws you in - and causes you to want to know exactly where the author is going with the story.

Sadly, I think this is the only one of Buffa's books really worth reading. I read (in paper, gasp), The Legacy, and his new one Star Witness, and neither came close to The Judgment. They both left me wanting more of the brilliance of The Judgment. You NEED to listen to this book. You will not regret it.

I was captivated. Buffa's storytelling capabilities were a surprise and a delight, given that I had no idea what to expect. And the reader - wonderful! Combine Buffa's skill with words and construction, imagery and character, with Predovic's performance and development of the characters as people, and it's truly spellbinding. This is a must-read in its genre!

This was one of the best lawyer books I've ever listened to or read! I like him better than Grisham, there was a more personal connection to the main character. Need to look for more Buffa titles!

Can You Change the Past?

This audiobook is highly enjoyable, with characterizations that are well developed for the major players as well as for several of the supporting characters. The narrator is one of the very best I have heard, and his reading strengthened the plot and the characters.

The story starts with an attorney, Joseph Antonelli, who is attending the funeral of a judge that had been murdered, who in Antonelli's experience is one of the most evil men he's ever known. The judge played an inadvertant role in Antonelli's early career, and this is combined with the story of another attorney Antonelli had known. While the police believe they have solved the judge's murder, things get more complicated when a second judge is murdered in very similar fashion. Yet, the two judges could not have been killed by the same person.

Antonelli begins to suspect a possible connection between the two murders, as he is called on to defend the person accused of the second murder. Antonelli must consider what could drive someone to confess to a criminal act they did not commit. Is it an act of insanity, or the only way to avoid going insane? Is it sane or insane to believe that the past can be changed by what is done today?

During this process we're presented with more of Antonelli's personal background, when a long-lost childhood love re-enters his life. This is the only woman he has ever truly loved, and we discover something in their past that caused them to have missed out on a lifetime together. Again, we see how the past can be re-created by the future, but can the future ever be what it could have been?

In the trial that concludes the book, Antonelli sees that in order to defend his client, the past must be re-cast to a different understanding of people and events. Even then, there is a final twist to our, and Antonelli's, understanding of the past.

This is a great book, made even better by a great narrator. I think it deserves all five stars.

This is definitely a well written book, full of suspense and well developed characters. Felt like I was right there with the characters...

I don't care what you say the reader is everything when listening to this great book and Dennis Predovic does not disappoint. His reading makes you feel and know every single character in this book and I could not stop listening. EXCELLENT!

Can't put it down!

Great writing, wonderful reading, intelligent dialogue, very accurate and knowledgable of the court system. It doesn't get much better than this.

Exceptional courtroom drama. Buffa and Predovic provided the finest writting and reading combination I have experienced in any audiobook. I listen in car to and from work and often wished for a longer commute. Highly recommended.

What a delight this book was!

I loved everything about this book. Never trite. Never boring. Always enguaging. Enought twists and turns to keep me guessing, but not so convoluted that it was difficult to follow. I didn't know Buffa was this good. I'll certainly try his other works.

My first crack at D.W. Buffa and I thought it was OK. I got used to the narration (my favorite is Scott Brick), and I liked the main characters. The legal stuff was fun (I like courtroom dramas) and the underlying storyline was good. Suspension of disbelief is required when it comes to some of the relationships, but this book is worth the listen--not a waste of time.

My thanks are because I had never heard of this author before listening to The Judgment and now would recommend D. W. Buffa's books to everyone who enjoys legal thrillers, as well as anyone who likes a really good story. The narration is excellent and I will certainly listen and re-listen to this Audible book in the future.

As good as Grisham and Turow at their best. Superb narration. Highly recommended.

Yes the story excellent narrator he was fantastic

The story was great and the narrator just made it that you had to listen .

Definitely and I did. I will listen to it again .

This is one of the best books I have listened for for awhile for that I thank everyone involved .

What would have made The Judgment better?

I was really looking forward to listening to this book. I've listened to about 1 1/2 hours and I've had to give it up. The narrator is simple terrible. I'm sure it's a good, well written story but the narrator, Dennis Predovic, has ruined it. There are long passages of dialogue and conversations. I got completely lost as Mr Predovic makes no attempt to change his voice for each of the characters. They all sound the same, So listening to a conversation it's very easy to get totally confused who's talking. It therefore makes a complete mess of what's going on. I've just checked, and this is the only book he's narrated for Audible. What a waste of money and time!

Simple. Change the narrator. Have someone who can intone differently for each character

I'm sure the story's a good one

One of the Best Legal Thrillers written

D.W. Buffa has crafted one of the best legal thrillers that has three-dimensional complex and interesting characters, a well woven plot full of twists and, story-weaving that leaves many satisfying 'ah-ha' moments as the story unfolds. It is a story you finish with mixed emotions of satisfaction and post-partum melancholy at leaving the characters as the cover closes. Highly recommended story and author.