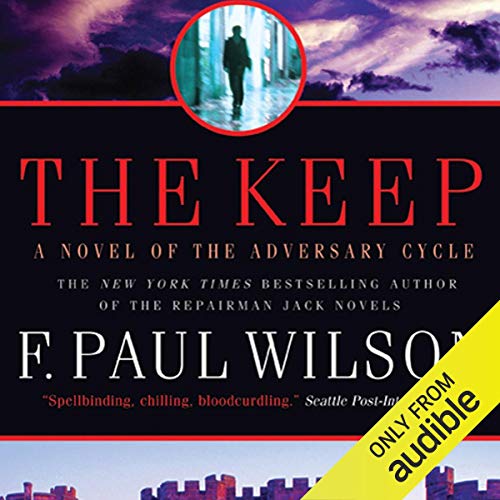 The Keep is the first book in the Adversary Cycle from best-selling author F. Paul Wilson

"Something is murdering my men."

Thus reads the message received from a Nazi commander stationed in a small castle high in the remote Transylvanian Alps. Invisible and silent, the enemy selects one victim per night, leaving the bloodless and mutilated corpses behind to terrify its future victims.

When an elite SS extermination squad is dispatched to solve the problem, the men find something that's both powerful and terrifying. Panicked, the Nazis bring in a local expert on folklore - who just happens to be Jewish - to shed some light on the mysterious happenings. And unbeknownst to anyone, there is another visitor on his way - a man who awoke from a nightmare and immediately set out to meet his destiny.

The battle has begun: On one side, the ultimate evil created by man, and on the other...the unthinkable, unstoppable, unknowing terror that man has inevitably awakened.

What listeners say about The Keep

At long last, The classic horror novel on Audible

One of the great horror novels of the latter half of the 20th Century, F Paul Wilson's "The Keep" is also the beginning of The Adversary Cycle; this edge of your seat thriller is finally in audio book format.
Quality narration brings to life this tale of German troops during WWII trapped in a haunted castle in Romania. As the body count rises, so does the tension, but there's more at work than the reader initially believes.
This is one that will be listened to time and again.

Finally, after almost 40 years, this awesome book is a available on Audible! It’s a fantastic book that I wouldn’t hesitate to recommend to everyone. Hope you enjoy it too.

Great work from F. Paul Wilson to get two of the missing books (Adversary cycle) released on Audible. Forget the movie, this is the real story, and it's fantastic!

I bought this book many years ago in the early 80’s. It fast because me a favourite and I read it many many times, loving it each and every time. 15 years ago, thinking I no longer needed it, I finally gave up my copy and virtually forgot the hours of pleasure it always gave me.

To my delight I saw that Audible had released it and it had a decent narrator (Sorry but I cannot listen to many American voices for long so,with the exception of a small number, I tend to avoid them if they are American narrators).
The audio version was everything I wanted. Excellent voices, changes of tempo etc. Ralph Lister made the whole book extra special and I was transported back into the world of The Keep. I loved every single second of it.

I liked the setting the most because I could visualize it from the movie somewhat. Obviously the movie is like a remembrance of the book after a traumatic brain injury, but it’s visuals were cool.

Anyways... the characters lacked depth — very one dimensional, but a standard horror story nonetheless. Some crap elements thrown in at the end — blacksmithing dwarves, really? Plot-wise it fell apart at the end as well.

The narrator was enjoyable though and really brought the German officers out the best.

Powerful, exciting and terrifying. A+

The Keep is a perfect blend of white-knuckle suspense, intense action and pulse-pounding horror. Wilson creates a truly satisfying mythology rooted in strong historical and metaphysical themes. The character development is outstanding. This version specifically is bolstered by Lister’s performance, which is truly outstanding in both its range and sincerity. I’m so very glad I took a chance on it and don’t doubt you will as well. Go for it!

Why is this book so popular?

There’s nothing in the story that stands out to me. It’s a somewhat new spin on the vampire tale. It contains Nazis. I guess its interesting that there is pretty much no characters to like.

The narrator is awful. All the characters sound the same except the woman. And the way he reads woman is...nauseating. All the male characters seem to be constantly growling at each other...it’s just all too much.

Wasn't too sure at first...

So glad I stuck with it for a little while, turned out to be a great read.

Great Story!
Good writer and great narrator.
Looking for something original. I would highly recommend this book.
thank you.

Pleasantly pleased. Hope Wilson will be a new horror author i can depend on for more well written horror. Got a bit tired of Magdas whining but overall, a very good book with a few scares.

Great story which I enjoyed when first released. Good performance..
a greatcstory which spawned a good film

I couldn't get enough of this book. The narrator does an excellent job and kept me hooked from start to finish. At various times throughout my hair was standing on end at the levels of creepiness peppered throughout the story. Thumbs up from me and I've added the second book to my wish list.

I've loved this book since I first read it in the mid 80s. I re-read it a couple of times after that, but the last time was almost 30 years ago.

While the basic story (Nazis, the undead, good versus evil) holds up well, Wilson's characterisation of Magda sounds cringy to modern ears.

Don't get me wrong, I'd still recommend this book, but just bear in mind that the female character is wholly one dimensional.

Among the greatest Epic Horror stories ever

Its slow to get into the Depth of the story, the first half is a little struggle but it picks up half way. The latter part is very intriguing, thought provoking and exciting. Its a truly epic tale!!

Love this book and always will. Nice to hear it read to me for a change. Makes me want to listen to the series now. I have been afraid to go back to old books I've read in the past as they've not been the same. This wasn't though perfect as the day I first read it the long long ago 😉

Read this book years ago and thoroughly enjoyed it then.......Can't finish this though, the narrator has the most boring, monotonous voice I have heard for a long time. Can't even exchange it as Audible has blocked me from doing so.

The original text that inspired a cult movie

I've only recently become aware that the movie of the same name had its origins in an original book.
With its killer soundtrack and star cast in my mind, I listened to this telling of the novel with enthusiasm,
The author writes in a style that I find easy to capture and the narrator gave some great voice to the characters.

While I started to have some misgivings that the book was a modern recounting of the vampire legend of Vlad Tepes and his familiar Renfield, it soon turned into something a bit different.

I don't think this book if for any specific audience, though I think maybe horror fans might get something out of it. I enjoyed it regardless, and there's nothing something satisfying about a bit of supernatural Nazi-bashing!