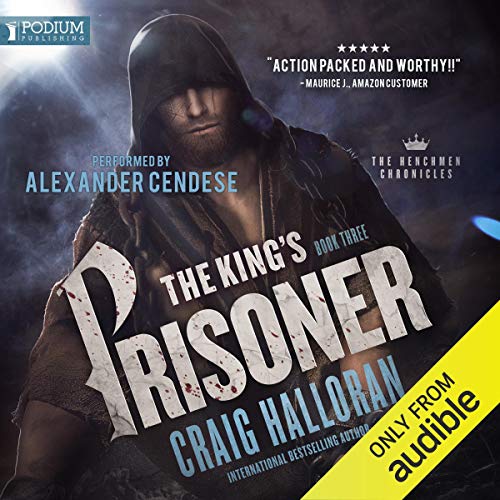 A new arena awaits, only this time the crowd doesn't crave home runs. They want blood.

With the last deadly quest behind him, Abraham Jenkins finally has time to focus on his own mission to uncover a portal home to 2018. He's closer than ever. He can smell the freshly mowed grass of the baseball diamond, and taste the ballpark hotdogs. But when mysterious new enemies emerge to attack the kingdom, Abraham must put his own agenda on hold to protect the King and his henchmen, lest he join them in a noose.

The mission is simple. He and the Henchman must sail head-on toward creatures determined to annihilate him and his team, and vanquish them. But nothing in the past is ever as easy as it seems.

Abraham discovers the King's daughter is kidnapped, and only he can save her. He must enter a Tournament of Swords and face an arena that reminds him of home more than anything before. Only, facing pitchers and pop flies is a far cry from axe-wielding barbarians and a bloodthirsty crowd.

Can Abraham fight for his life and find his way back to Titanuus before his past destroys his future?

What listeners say about The King's Prisoner

It always happens to every author. They stop being/seeing through the MC's eyes and get all psycology and action until they ruin the story (and themselves usually). Every good reader knows when this happens, We all delight as some artist twists itself into authorhood at the sacrifice of himself. Well, RPG Lit lets the MC look right back at the author so artist does not have to twist. (That means the book becomes real to the artist!) {So crazy kat! How many books went real and did an override? Do the overrides take? How would we ever tell?}

Alexander has not twisted yet! You can still see this world and it is as real as you are!

The Henchmen Chronicles Do Not Disappoint

The King’s assassin is the exciting continuation in Craig Halloran’s King’s Henchmen series.

This installment follows Ruger Slade as he is, again, magically possessed by a different man from the near now world.

King’s Assassin is even more exciting than the former installment, which follows the course of Abraham, as he tries to protect his king and land, while trying to find a way home.

The King’s Assassin definitely picks up speed, where King’s Henchmen left off. I am very impatiently waiting for the next installment of this series.

This series is nothing like Halloran has written before. Its dark, gritty, and sometimes a little sexy. The series has strong characterization, as well as hysterical allusions to modern day, while still being a slash and dash, swords and sorcery genre.

I definitely recommend this book, if you like your DND with a little modern flavor.

I have likes Akexander Cendese's narration from the start, but the more the story goes, the more I am enjoying his characterization skills, and sound. He was simply born to narrate.

Alot of questions answered and several to be. Is Ruger and Abraham one or two minds and body? Are their prisoners on both worlds that need to go home? Who is pulling the strings? So hurry book 4 and release so I can find out.

I really want to give this an overall of 4.3

Thought I’d leave my review on book 3 instead of one on each book. I wasn’t super sure what I would be getting from this series. I was a little nervous in book one as there were some glaring editorial issues. As I find with most series the first books can be the weakest until an author hits their stride. No doubt that happened here, by the end of book one the world is being fleshed out rather nicely. There is a real feel of comradeship between the characters. This reads as almost an homage to old style adventure style pulp stories, similar to a Burroughs book. Where each chapter you learn something new about the environment or characters. I really, really enjoyed all three books and will definitely be getting number 4 when it releases next week.

The first book was a drag and horrible to listen to. The second book was a huge redemption. This third book was quite enjoyable as well.

One thing I hated in the first book was the stupidity of the MC and his refusal to accept reality and adapt to the situation. However, as the series goes on each of the Henchmen gain more character and personality. It becomes enjoyable to listen to their banter.

This book harbors a very troubling topic for me. Particularly mental illness and mental hospitals. It isn't a huge part of the book but the topic always hits me so hard. The doctors and nurses always insist that they keep you there for your own safety and health. Once you enter they push you down, call you crazy, give you drugs with unknown side effects, it hurts. They treat you less than human and it is one of my biggest fears. IT is worse than prison, they dismiss you as less than human and no one will listen to you because you have been branded as crazy.

Anyway. This book felt a bit fast paced. It worked in trimesters, or three parts where things could be divided up. I am still not a huge fan of how the author breaks up the chapters, or how he has epilogues AND previews at the end of the book. It seems a bit redundant to me.

Overall, If you can stick out the beginning, I would recommend this as a worthwhile fantasy series. It is by no means the best but it was enjoyable. I will be on the lookout for book four and suggest you catch up before its release.