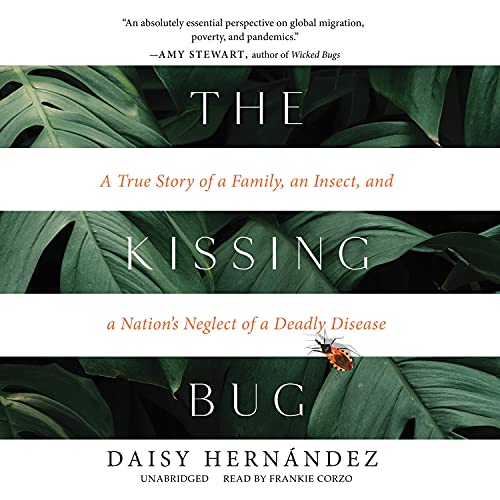 Who does the United States take care of and who does it leave behind? This is a riveting investigation of infectious disease, poverty, racism, and for-profit health care - and the harm caused by decades of silence.

Growing up in a New Jersey factory town in the 1980s, Daisy Hernández believed that her aunt had become deathly ill from eating an apple. No one in her family, in either the United States or Colombia, spoke of infectious diseases, and even into her 30s, she only knew that her aunt had died of a rare illness called Chagas. But as Hernández dug deeper, she discovered that Chagas - or the kissing bug disease - is more prevalent in the United States than the Zika virus. Today, more than 300,000 Americans have Chagas.

Why do some infectious diseases make headlines and others fall by the wayside? After her aunt’s death, Hernández begins searching for answers about who our nation chooses to take care of and who we ignore. Crisscrossing the country, she interviews patients, epidemiologists, and even veterinarians with the Department of Defense. She learns that outside of Latin America, the United States is the only country with the native insects - the “kissing bugs” - that carry the Chagas parasite. She spends a night in southwest Texas hunting the dreaded bug with university researchers. She also gets to know patients, like a mother whose premature baby was born infected with the parasite, his heart already damaged. And she meets one cardiologist battling the disease in Los Angeles County with local volunteers.

The Kissing Bug tells the story of how poverty, racism, and public policies have conspired to keep this disease hidden - and how the disease intersects with Hernández’s own identity as a niece, sister, and daughter; a queer woman; a writer and researcher; and a citizen of a country that is only beginning to address the harms caused by Chagas and the dangers it poses. A riveting and nuanced investigation into racial politics and for-profit health care in the United States, The Kissing Bug reveals the intimate history of a marginalized disease and connects us to the lives at the center of it all.

What listeners say about The Kissing Bug

worth a read! harrowing account of a family's valiant struggle with a disease. A personal journey of exploration to understand the underlying cause of a destructive disease that deserves more concerted attention by all American nations