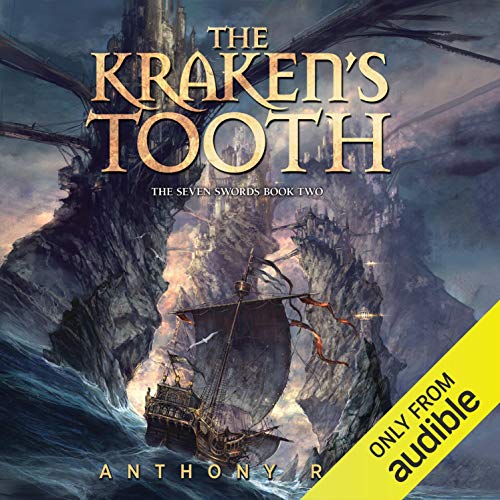 Where noble houses call upon dark magic to triumph in their endless and deadly game for dominion....

Landless one-time king Guyime, once called Pilgrim but known to history as the Ravager, has survived the fall of the Execration - an event that set him on a path to find the legendary Seven Swords.

Guided by sorcery, Guyime journeys to Carthula in the centre of the First Sea to claim the mythical blade known as the Kraken’s Tooth. Aided by three companions - the beast charmer Seeker, a powerful sorceress, and a scholarly slave - Guyime ventures into Carthula’s perilous underbelly to secure a prize guarded by ancient magics, cursed spirits, and lethal traps. But can he survive an ultimate ordeal crafted from his worst nightmares?

Continuing the epic story begun in A Pilgrimage of Swords, The Kraken’s Tooth is a fast-paced tale of low intrigue and grand adventure from the New York Times best-selling author of the Raven’s Shadow and Draconis Memoria trilogies.

What listeners say about The Kraken's Tooth

Another Diety, Another Adventure

I was surprised at just how similar the feel and flow were to the previous book - mythological backstory, repeated violent and gruesome challenges, ending that leaves a wake of destruction. That said, while it had less adventure/excitement, I thought this title a better read over the previous as it filled in a lot more detail on the characters and backstory, making it overall a more satisfying read.

Wasn't sure if I'd be continuing this series after the first, but after this pleasant surprise I'll definitely be reading on.