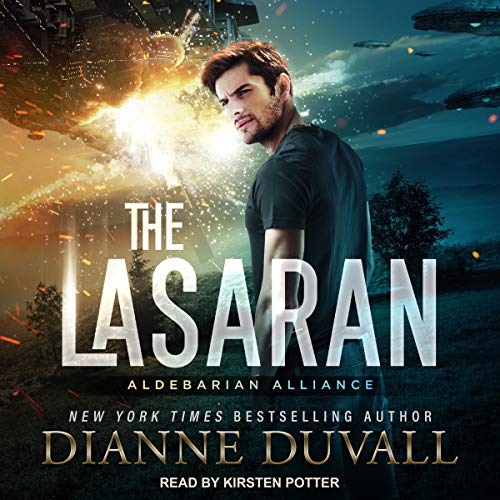 When an ally reveals that his younger sister was seized and is being held prisoner on Earth, Taelon descends upon the blue planet, intent on freeing her and exacting vengeance. However, all does not go as planned. Before he can find her, Taelon is captured and becomes the subject of torturous experiments. For what feels like an eternity, all he knows is pain and fury...until a mind tentatively touches his own and a woman's voice forever changes his world.

After suffering tragic losses, Lisa is finally beginning to carve out a future for herself when chance sends her to the Anomalous Cognition Research Institute. What at first appears to be a benign organization instead turns out to be a government facility harboring a much darker intent. Lisa discovers this too late and soon becomes the unwilling subject of a terrifying experiment. Just as fear and desperation threaten to consume her, a deep, compelling voice penetrates the looming insanity and lends her hope.

What listeners say about The Lasaran

Just Okay, Not Terrible, Not Great

I love to listen to books to get AWAY from preaching on vegetables, organic foods, Bad Earth, what the difference of
real chocolate or those with chemicals, blah, blah BLAH.

Book is listed under: Romance /Science Fiction/Fantasy so perhaps just stick to that.

Kirsten Potter does an okay job, but she makes the sex scenes almost gross to listen to.

***** I counted approx 7 reviews that actually sounded like a real person wrote them, not a paid review to boost the ratings.
It gets harder and harder to find decent books on Audible anymore. Sad

Dianne Duvall does it AGAIN!

This story will take you on an intergalactic race and leave you begging for more.

Is there any genre that Dianne Duvall can’t write? I know, Technically she has written Alien before with Ami, but that was still focusing on the immortal guardian aspect of the genre. This story, while yes we see our favorite IGs pop up, they are set aside from the story. This is the story of an alien on Earth. Detained and tortured. This is an alien that falls in love with a human. This isn’t the same as the stories we’ve read before.
Lisa is sweet and strong all at once. She is the type of heroine that I can relate to. She has good instincts and is cautious. She doesn’t fight in a physical manner but she fights with intelligence. She can stand up for herself but also step back and acknowledge that she can’t do something. Like “so- if you go out and die who will help the rest of us?” Or similar.
Taelon is strong in his ability to listen to her. When she says “I’ve gotta do this alone stay put” he acknowledges her intelligence. And that my friends is HOT HOT HOT.
There are sexy times and they aren’t something to make you blush too deep a scarlet but they are gonna turn you a darker shade of pink. They are perfect for this couple.
The most fun character in this for me is Leah. She’s so maternal and it’s just nice. It’s nice that she’s just open and kind to Lisa when she shows up.

Kirsten Potter is as amazing as ever. She will always be an easy read for anyone.

The gifted one/ immortal guardian lineage does come to play somewhat. After all, we can’t have any book involving Ami and her family without it. While it’s there- it isn’t something you have to know about to understand the story. If you want Amis backstory after you’ve listened you can go grab it but this is a fresh series that is able to be read or listened to as a stand alone.

Another great read by Dianne Duval


This was a good story, but I did feel like I read a part of it before in the Immortal Guardians books, when the hero is constantly telling the heroine how “adorable” she is. Thankfully, Taelon only told Lisa she was “adorable” 5 times, but even that seemed like a lot. I don’t know, that’s something I always say to/about a baby or a puppy, not an adult.

Other than that I enjoyed it immensely and will definitely read the next one (hoping no one is adorable in the next books.)

I especially enjoyed the space attack when Lisa and Taelon were headed for Lasaran. I listened to the few pages of the next book too so I’m anxious to read that one.

As always, it was nice visiting Seth, David, Marcus, Ami, Melanie, and everyone else. I absolutely love the Immortal Guardians.

There was graphic sex in this and the F-bomb was used 25 times.

As to the narration: It’s always a pleasure to listen to Kirsten Potter do all the familiar voices we’ve all learned to love in the Immortal Guardian series.

I READ THE KINDLE EDITION AND I LISTEN TO THE AUDIBLE EDITION NARRATED BY KIRSTEN POTTER!!

If I could give the Lasaran 10 Stars I would. The story stars out with Prince Taelon of Lasara going to find his sister Amiriska know as Ami in the Immortal Guardians World. Ami was captured and tortured on Earth for months before she was found by Seth and David the heads of the IG's.

Taelon is captured and tortured for 3 years on an Earth Military Base. He hears a voice of a sad women Lisa who is also, being held on the Military base in Texas. The two communicate telepathically. This is the beginning of a profound love.

The Lasaran Aldebarian Alliance series is a perfect marriage to the Immortal Guardian series. It was such joy when Ami gets reunited with her brother Taelon. The story moves fast, there is action, happiness, sadness. I was crying when Ami was able to see her parents and introduce them to Adera her baby daughter. Its a moving scene in the story. The love between Taelon and Lisa an all they go through to escape there torturers' is heart rendering.

I must say that I recommend anyone reading The Lasaran first read The Immortal Guardian series. It can stand alone, but it is so much more rewarding to understand the back story and the characters that are from the IG series.

I also, listen to it on audible. As usual Kirsten Potter is Amazing as the narrator!! I just love this first book in a new series.

Please, please, please change up the steamy sex scenes. The same shower sex scene has been used in at least 3 other books...and the phrase “so good” has been used in every single one I’ve read. That’s maybe made a little worse by the narrator who reads the scenes in the same way, the same female voice is used for every character-not very original. It’d also be nice if the dialogue between the two characters was a little less hokey as well, it’s so formal it’s awkward and ruins the moment sometimes.

I am a huge fan of Dianne Duvall. While I am eagerly awaiting the next IG book I an utterly fascinated with the AA. And I can not wait for book 2. And as always Kirsten Potter is flawless.

despite the constant lectures about vegetables, and how bad the are and environment is on Earth ( implications that aliens are so much more enlightened is very annoying) I've got myself sucked into the overall story and want to see the good guys win. Also annoying that most the women are short.. best character was Seth's wife... she was the most interesting so far.

the story has potential with a moderate amount of entertainment, but the sentences are lacking depth and a natural flow. just ok...

Listening Kirsten Potter and her voices for the familiar characters is like putting on a old comfy jacket. Loved it.

I found this book excellent, exciting, romantic, happy ,sad in parts.
would highly recommend it to anyone..
cant wait for the next book already in library waiting for the release date.

A Fantastic Start To This Sci-fi Series.

I'm already a big fan of Dianne Duvall's books but sci-fi is not my usual reading genre. However, I was drawn into this story and remained hooked throughout.

I love Dianne's writing style, the language she uses and the way she paces her plots. Her characters, both main and supporting, are written well with a range of personalities without being stereotypical. Our leading lady here, Lisa, was perfect. She displayed all the traits that I need a protagonist to have: resilience, intelligence and gumption.

Kirsten Potter is one of my favourite narrators. She has Narrated all of Dianne's books to date. As usual, Kirsten's performance was excellent and conveyed just what the story needed, when it was needed. She is a master at creating unique voices for each character - both male and female. She also uses her talent to distinguish the supporting cast of characters too. This makes any and all dialogue not only easier to follow but a joy to hear. The voices she created for our protagonists, Lisa and Talon, felt realistic and brought them to life.

Although there were quite a few epic jumps along the story timeline, I understand that they were necessary to "get everything in". Now that the scene has been set, I can't wait to get back into space and join the Aldebarian Alliance. Book 2, The Segonian, is due for release on 19th January 2021. We get a excerpt from it at the end of this audiobook and I'm loving it already!

Awesome start to a new series

Love the new start while crossing over to events in death of darkness. Recommend reading her immortal guardians series first - you won’t regret it!

I absolutely loved this book. Great story with quite a few of the immortal guardians featured throughout. A sneak preview of the next in the series is at the end of this book .
I listened to the entire book in one go just couldn't put it down. my only complaint is waiting for the next one in the series is going to drive me crazy.
I would recommend listening to the immortal guardians series before reading this one .