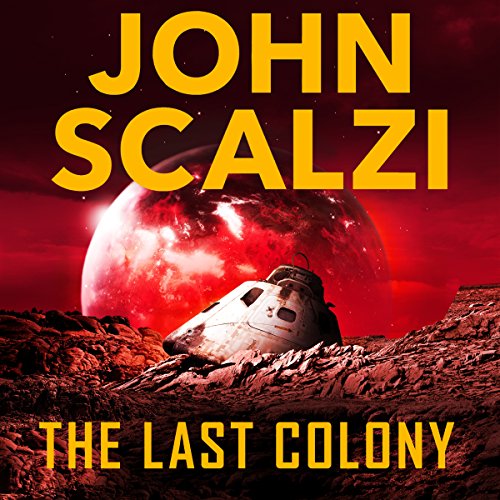 They must save themselves - or die trying.

John Perry was living peacefully on one of humanity's colonies - until he and his wife were offered an opportunity these ex-supersoldiers couldn't resist. To come out of retirement and lead a new frontier world.

However, once on the planet, they discover they've been betrayed. For this colony is a pawn in an interstellar game of war and diplomacy. Humanity's Colonial Union has pitched itself against a new, seemingly unstoppable alien alliance dedicated to ending all human colonization.

As this contest rages above, Perry struggles to keep his terrified colonists alive on the surface below - despite dangerous interstellar politics, violence and treachery. And the planet has yet to reveal its own fatal secrets.

What listeners say about The Last Colony

Great story, but.. The nerrator's pauses between paragraphs are a bit too short, and I would have liked more diffrent voices for the characters.

I'm not sure if that is entirely accurate, but suffice it to say that I loved the story, and how well it was narrated. Especially the way the narrator adjusted his way of speaking to the situations.

I loved Old Man's War, but I didn't feel Ghost Brigades hit the same high notes. I enjoy it, but I felt it was a slightly inferior effort. I do however, love The Last Colony. Worth a listen!

Political intrigue, interesting characters, surprising battles, this book has exactly what you want.
Even though the premise of the story seems to point to a boring story, especially after the previous books, the twists of the story deliver a surprisingly captivating story.

//not as thrilling as old mans war, storyline good, perhaps it was. the person who voiced the story not putting passion into it.

LITTLE HOUSE ON THE PRAIRIE

boring dont bother...timid compared to the first 2 books...dont think I will bother with book 4

brilliant thanks for your imagination

Best book this year third in the series takes humanity to the truth often funny and always heart ache is not far behind. cannot wait fo my next fix

Twists and turns, humour, drama and the unimaginable expanse of space.
Written with imagination and skill. You can't ask for more in a book.

A little slow this one.

Some nice touches here and there... But still far too heavy on the "they said, I said". There are ways around it!

Admittedly the he said, she said can be a little irritating, but if you are able to ignore it highly enjoyable but with some funny parts.

Great book, not as good as the other two. Still worth getting and was amazing

loved every book in this series so far and this is no exception. Once again John Scalzi provides a great story and characters made even better by the amazing narration of William Dufris!

Slow start but excellent finish to the three books

This book lived up to my expectations following book 1. Really enjoyable read that started slowly but had an excellent and well structured finish.

Amazing how each book in this series can be so different from each other yet equally so engaging.

wasnt as good as the 2 previous books, but does advance the story so the next book should be an interesting listen

I'm sorry but I can't think of a positive thing to say about any of the novels in this series let alone this warm puddle of a novel.

The story was so nauseating and predictable I physically could not bring myself to finish.

Unless you're in your early teens and have read all of the twilight series, and loved them, only then might you enjoy this book.

So bad I feel robbed