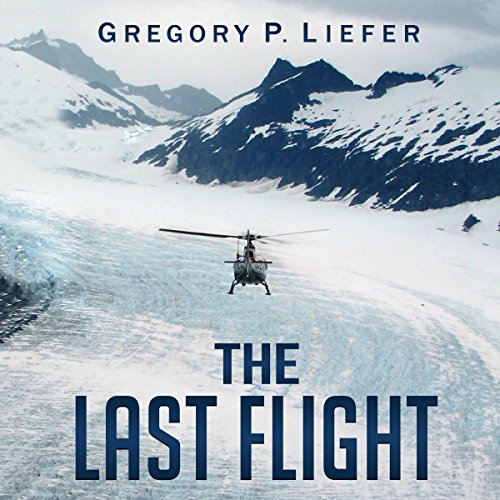 Set against the harsh beauty of Alaska, a veteran helicopter pilot is torn between ending his own embattled life and rescuing survivors from a mountain plane crash.

The Last Flight is the heroic story of Gil Connor, an Army helicopter pilot as he struggles with the finality of a terminal illness. Haunted by the horrors of war and a turbulent past, Connor is torn between ending his embattled life and saving the survivors of a remote Alaska plane crash. Amid the turmoil of an approaching storm and almost certain failure, his underlying intentions are unknown, even to himself, until the very end.

Aviation Details Over The Top

I appreciate the author's military service and vast experience; however, I found it hard to stay interested in the story line because the narrative was so bogged down with hyper-detailed descriptions. I had to force myself to keep listening through long, boring passages that described--in excruciating detail--everything from the interior of the aircraft to the layout of the hangar. The author clearly has great knowledge of military aviation, but I got the idea that he wanted to impress the reader with his knowledge. There was a plot, and it kept me going, but I felt it would have been better suited to a short story or novella. Aviation enthusiasts might appreciate the author's commitment to minutia, but I did not.

R. C. Bray is the only reason I finished the book he was as always outstanding with the delivery of the story

This is about as close as a novel can get to what helicopter rescue is all about. Written by somebody who had obviously been there and done that. I spent a 27 year Air Force career mostly in Air Force Rescue starting with SB17's and ending with HH-3's and could find no mistakes in his description of helicopter operations.

Bought because of RC Bray

Bought because of RC Bray. Nearly broke down in tears because of the ending.
Full disclosure... I am a professional aviator with over 13,000 hrs under my belt. That said I don't normally like aviation related fiction. I usually grit my teeth at liberties taken in such stories to increase the drama factor. I only rolled my eyes once or twice in this story. That is a great credit to the author. The aviation side of the story was descent.
This story has lots of character driven drama outside of the flying which is again a credit to the author.
No spoilers here but the ending had me fighting to hold back the tears. Again a credit to the author who painted a landscape and a cathartic vision and ending. I hope heaven is as grand.
Well done.
Btw RC Bray is a master craftsman.

This was so good I took the brunt of my wife saying “get the head phones off!”

Bray has no equal in narration. Serving in the Army as a chief warrant officer and medivac pilot, I was amazed the details were spot on. One scene brought tears. Enough said

R.C. Bray does it again with another great performance. Delightfully written with excellent climax. Brought a dabble of a tear to my eye towards the end.

Had a Hard Time Sticking With It

Great story for aviation buffs. Heavy on technical details; light on storyline. Not my favorite author.

Great Story and great narration. Enough said. I would have liked the ending fleshed out a bit more but still a very happy credit purchase.

The plot had potential. Rc Bray couldn't do a lot with the tortured editing and forced dialogue. Made for daytime TV.