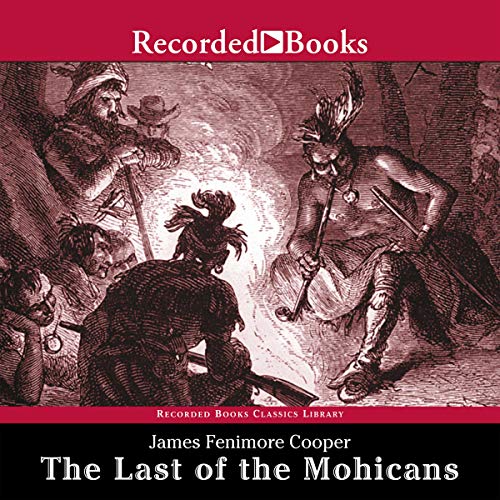 The Last of the Mohicans has all the elements of a classic frontier adventure: massacres and raids, innocent settlers, hardened soldiers, renegade Indians, and a doomed love affair. It is a memorable portrait of fierce individualism and moral courage. But what draws readers and listeners again and again to this panoramic novel is its deep insight into the symbols of American consciousness.

The French and Indian War adventures of Hawk-eye, a reclusive white woodsman, and his Indian friend Chingachgook have contributed much to the frontier mythos. The story of two men who are at odds with their own people, but reluctantly agree to guide two sisters through hostile Indian country, has found an enduring place in the literary and cultural history of America.

James Fenimore Cooper is widely acknowledged as the pre-eminent American writer of his time. The Last of the Mohicans is one of his most popular and critically acclaimed works. Larry McKeever's animated and skillful narration intensifies the novel's romance and drama and brings its tragic characters fully to life.

"Want to relish your early American history, to thrill again at the suspense of forest dangers, to wonder whether Hawkeye will ever quite forsake the trail for a tender passage of love and domesticity? Then this book is for you." ( Chicago Sunday Tribune)

What listeners say about The Last of the Mohicans

Great book, but this is an old recording & has background hiss. Pick the $ 1.99 recording instead. Narrated by Larry Rudnicka (sp?)

Not quite what I expected

This read a lot fresher than I expected from a book which is now almost 200 years old (although, note that the narrator reads the footnotes without any warning--at first, I thought Cooper must have been post-modern!). The most surprising and intringuing aspect was its temporal scope: the events of all 400 pages (14 hours) occur within just a few days. This means the pace of the story-telling is relaxed, even when the action is not, affording loads of detail and creating very effective suspense (reminiscent of Hemingway's _For Whom the Bell Tolls_). For the most part, this immersion keeps the reader fully interested, but sometimes it becomes tedious, e.g., the Homeric burial rites at the end. The most memorable scenes are those relating the shocking horrors perpetrated by American Natives, dubious tellings which obviously should now be taken with several grains of salt.

Quite Simply A Most Wonderful Read

I thoroughly enjoyed this tale and I am very pleased I have it as an experience in my life. My satisfaction is due, in no small part, to the excellent skills of the author and the narrator. In this work, it quickly becomes evident that Mr. Cooper possesses a wonderful command of the English language in grammar, sentence and context structure. This skill is present from begging to end of his novel. His contextual structure is so strong that when the narrator makes a single error in pronunciation the error in no way interferes in the reader's comprehension of the correct word and meaning. Aside from that singular error, the narrator displayed a strong command and a smooth, flowing fluency of an English dialect long since removed from that of our present day English. I would say that the narrator has taken that which would be difficult language for most, if not all but a few, present day English speakers and made it easier that the listener may comfortably comprehend the story. I found the narration beneficial and therefore declare it worth the additional cost. The author's story structure benefitted the reader's imagination in every possible way. This is one classic for which I harbor no regrets for having dedicated my time.

Passion of the French and Indian War

An engaging immersion in the French and Indian War, among the savagery of the Indians, caught between the powers of France and England. The story of the Mohican and the Delaware tribes, decimated by more than a century of contact with whites. Interesting characterization of Hawkeye and of his Indian brothers. Even the Huron villain is understandable. Better than any of the movie versions of the story, even though somewhat dated in style. Excellent narration.

This was my first Cooper novel. He spins a wonderful adventure tale which greatly caught me by surprise. The rendition by the narrator is done excellently, as well.

At first I thought I wasn't going to like the narrator. He was very monotonous at first. But then the story deepened and the characters fleshed out and the narration improved. Uncas and Hawkeye were my favorite characters. I need to see the movie now.

A Surprising Classic of the Old American Wilds

I purchased this audio as a 99 cent addon to a free Kindle ebook. i was surprised by the quality of the reader and pleased with the original story of rhe movie I had enjoyed many years ago staring Daniel Day Lewis. The portraits of the inhabitants of the American wild was pleasing and the action of the story did not disappoint.

So boring and badly read I couldn't get into it.

It may have been well written for it's time but the expressionless narration was terrible and I was bored to tears before just giving up on it.

The book was great. This particular audiobook had a couple problems however. The chapter titles are not aligned to the corresponding chapters in the book which is frustrating if you lose your place in the book and at a few places in the audio an echo of the reader starts and is a bit distracting. The reader is great though. I thought his voice fit the book very well.

it's a long story, but it's a great many stories compiled into one book. there is a reason this classic has stood the test of time.

It's amazing how much freedom can go to film directors distorting facts from the book.
The book & the narrator help bring images to reality.I was there.Thankfully not.Hard & brutal times made for an interesting story.

Tomahawks to the fore

Fantastic story but terribly difficult to listen to. Written in 19c english and therefore very flowery and needs 100% concentration. I didn't finish it.

Enjoyable, but not quite there.

I cannot remember ever having said this before, but I thought the film was much better than the book. Invariably, film-makers destroy a good book, which this is, and for those who have read the book prior to watching the film, they are invariably disappointed. Not so in this case.

I felt this book dragged ever so slightly and was trying to look for a direction. There is a very linear plot which bounces along well enough with moments of action and moments of poingnancy. Unfortunately, there is never enough emotion for the reader to get involved in, and as the main (and one-dimensional) character's friends are North American Indians who hardly ever speak, and the main character is himself portrayed with all the depth of a Boys Own Annual hero, the listener feels they are involved in the daydream of the repressed author who has written this book for his own pleasure rather than that of others.

I loved the film, which in my opinion stands alone in it's genre, and commend the scriptwriter and film director for injecting action, passion and character into this enjoyable but average book.