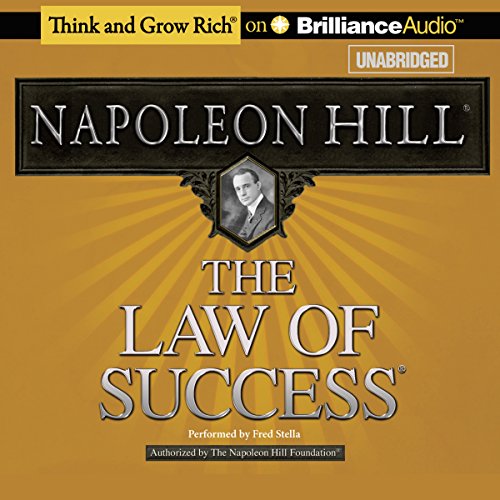 The Law of Success

Napoleon Hill is considered the forefather of the modern personal development movement and his motivational classic, Think and Grow Rich - the twentieth bestselling book of all-time - has inspired millions with its words and thoughts on discovering success and abundance within oneself. But, Think and Grow Rich was but a condensation of his true master work, The Law of Success.

Twenty years of research and writing after his first interview with Andrew Carnegie. Twenty years spent interviewing the most famous and successful men of his time, studying their habits, analyzing their methods and unlocking their secrets to success. First published in 1928 as an eight-book series, The Law of Success represents Hill’s complete philosophy of success and mind-power method - the original master key to personal achievement.

In this audiobook you will hear Hill’s complete explanation of his method, his philosophy, and his science of personal achievement - unabridged and unadorned with modern updates. Learn the:

What listeners say about The Law of Success

Amazing book even in these modern tim3s

This book is an amazing cornerstone for any person wishing to excel in their job, career or profession of choice
I will need to go back and take notes EVEN after listening to chapters MULTIPLE times
I would take this on my runs and jogs in the morni gs and WOW
ABSOLUTELY FANTASTIC!!!!👍 ❤️❤️❤️❤️❤️

Great, but falls short from Think and Grow Rich

Really inspirational and things you should remind yourself of every now and then. I listened back in 2009 Think and Grow Rich, which was in my opinion better, but the content is much the same. Fred Stella is a great narrator.

I enjoyed and learned a pretty good amount from t

I enjoyed and learned a pretty good amount from this audiobook, also it still kept most the important information from the original so I would recommend it.

Well worth it despite flaws

There are sections of this book that are idealistic and demonstrably wrong. However, these are overwhelmed by the well crafted and articulated truths. This is one of those few books like Covey’s 7 Habits that can truly teach you how to be a better, happier, and more successful human being.

I strongly recommend this one, for all adults, and maybe especially younger people who will benefit the most by it.

Hmmm, indeed The Law of Success

My only disagreement with Napoleon Hill is his foolish belief that a One World Religion will end wars. The One World Government is coming with its own religion of Human. And the wars will destroy 80% of the world's population.

Decent for a freebie

It was a good book, definitely worth checking out with the included freebies on audible plus. A little more watered down than the original of course, not quite as good as some others that have similar branding and formatting of excerpts of the original. Overall a solid choice tho and worth a listen.

Loved it so much that I will be listening to it again, probably 3 mor times

I am inspired by all the books by Napoleon Hill. I was pleasantly surprised about the last chapters of the book pushing for universal peace . Last year I had cancer and as a writer and artist wanted to organize my legacy and promote my long time hippie dream of ending all wars. So last year I became the founder of the American Zen Peace Foundation. So when Napoleon Hilll wrote about universal peace and ending all wars also, I was especially inspired and appreciative of his words.

This book helps to take a look at yourself and make positive changes to your behavior.

Is this abridged or not?

A great listen, in spite of its age. However, the pre-amble says it's abridged, whereas the title page says unabridged. Rather annoying.

fab! listened to it over and over again.

It has great principles to follow to input into your life.
Timeless advice. shorter than the original book.

Napoleon Hill has written a book that offers great advice regarding the will or spirit but fails to provide the know how in order to implement his teachings.

Overall, this book has little to no new knowledge for anyone who has read any such books before this one, therefore I would recommend this book only to those new to the subject of self mastery.

I couldn't stop listening. The narrative was clear and engaging. The content was enlightening

This book is a game changer

This book is hands down one of the most helpful books I’ve read in unlocking abundance.