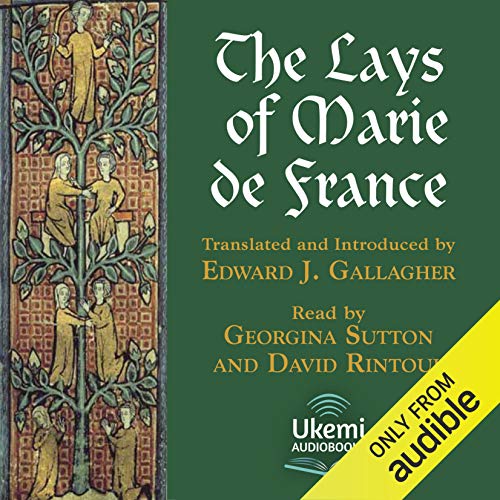 The 12 Lays of Marie de France offer one of the most striking collections of short narrative poems of the 12th century - two centuries before Chaucer.

Written in Anglo-French, they contain beguiling and entertaining stories of love and romance, of chivalry and adventure with sometimes even a magical twist. They are especially unique in early literature by being ascribed to a female poet, Marie de France: in the very first Lay - 'Guigemar' - is the introductory line: ‘Hear my Lords, what Marie says, who does not wish to be forgotten in her time.’

In this modern prose translation by Edward J. Gallagher, professor of French studies, Wheaton College, Norton Massachusets, the vigour and spirit of the Lays is foremost, balanced by gentle poetry and story-telling. Professor Gallagher, in his introduction, explains: ‘If Chrétien de Troyes’ five romances and the two Old French versions of the Tristan story constitute the medieval precursors of the modern novel, The Lays can be considered the medieval antecedents of the modern short story. What is undeniable is Marie de France’s place in literary history as the most accomplished writer of lays.’

Each of the Lays focuses on some extraordinary adventure involving in all cases a problematic love relationship in a chivalric society. The geographic setting is frequently, but not exclusively, Britain or continental Brittany.

These are tales of honourable love, adulterous love, old men attempting to guard young wives, betrayal, hope and despair. Often, strict moral codes expected by the Church of the time are flouted as love conquers all. The Lays are read engagingly by Georgina Sutton. A short introduction leading to the Lays, and scholarly notes to conclude by Professor Gallagher are read by David Rintoul.

In addition, the recording is accompanied by a PDF containing the prologue and the first Lay, 'Guigemar', in Anglo-Norman for further interest and insight.

What listeners say about The Lays of Marie de France

Prof. Gallagher has truly crafted an artistic and wonderful translation of the "Lays...". When listening to these medieval tales of love and adventure, you will have no idea that they are translated from another language. Even though the stories are medieval, they are filled with emotion and excitement that rival the great works of literature. The readers do an exceptional job and are a joy to listen to. Listening to these tales was definitely the finest auditory literature experience I have ever had!

If you are already familiar with the ideals of Courtly Love and questing knights, from the stories of King Arthur, maybe, in any retelling, then these short tales are likely to draw you in. They simply ARE great stories, and all the more alluring for the seven hundred and more years between them and us. Theirs is a strange and fantastic world: the only modern equivalent might be the amazing fantasies of science-fiction. Marie de France and her Lays, once heard, will haunt you... .