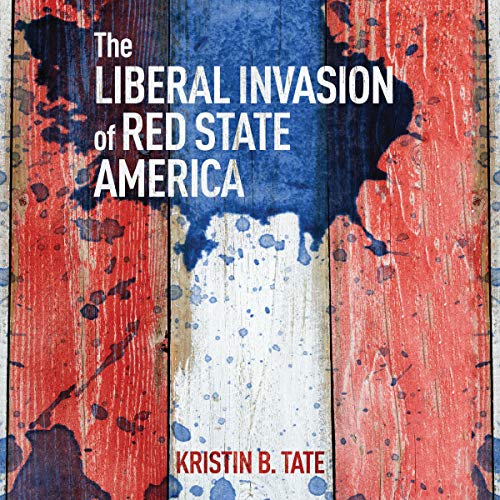 Written by: Kristin B. Tate
Narrated by: John Pruden
Free with 30-day trial

Progressive upper-middle-class urbanites are deserting expensive liberal meccas like New York and San Francisco and flocking to traditionally red states like Colorado, New Hampshire, Virginia, and Texas. The result is a sudden, confusing purpling of small-town America. School boards and local governments are being reorganized around the progressive agendas of pushy transplants. Neighborhoods are becoming unrecognizable. And the implications for future Congressional and presidential elections are staggering.

What listeners say about The Liberal Invasion of Red State America

Interesting and back up with facts

You really can't deny what this author has written here, she lays out the facts backed up by independent stats and this really put into perspective for me how government spends and how much they spend on state and local level and it's crazy especially liberal states they are just more than insane with spending.

Loved the part about the author after a time away from home going back and seeing how things changed.

How a libertarian became a republican

I am a big fan of the two previous books written by the author but this one seemed to be written by a completely different person. The humor that used to make her writing style so unique and engaging is gone. The common-sense libertarian perspective that used to make her points so relatable to everyone is gone too. The very topic of this book contradicts her previous ideals: why does she even care so much that people move places? The world has been constantly changing since its very beginning, and every change leads directly or indirectly to progress. An enlightened libertarian mind would allow things to happen (without trying to micromanage or preserve or lament them) as it would realize that no change is worse than any change. Live and let live! I would rather read 'How Do I Tax Thee' part 2. The first part was a true masterpiece!