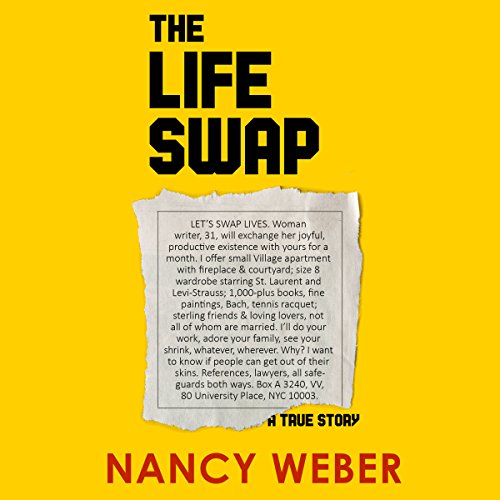 In February of 1973, Nancy Weber put an ad in the Village Voice offering to trade places with another woman, a stranger, for a month. In hopes of better understanding what was fixed and final in each person - and what was invented, and therefore might be reinvented - they would use each other's names, live in each other's homes, love each other's loves, and do each other's work. After interviewing many of the fascinating women who answered the ad, Weber - single (with a longtime lover) and straight - chose a polyamorous, bisexual, married psychologist and academic, the pseudonymous Micki Wrangler. They spent five months getting ready for their adventure - cajoling their nearest and dearest into participating, exchanging thousands of details, and swapping deep secrets. But, instead of a month, their wild ride lasted only a week. Wrangler was having a rough time (and Weber too good a time, maybe) so they decided to call things off.

Wanting The Life Swap to convey more than her own experience, Weber invited Wrangler and 10 others to enrich the book with their uncensored reports. Publicity for the book included stints on The Tonight Show with Johnny Carson and To Tell the Truth. The book achieved a kind of cult status, in part because it's a relic of 1970s sexual openness (cruelly destroyed by HIV/AIDS) and belief in the right of self-invention. Recent critics have credited the book with inspiring life swap reality TV shows and several popular novels and films.

What listeners say about The Life Swap