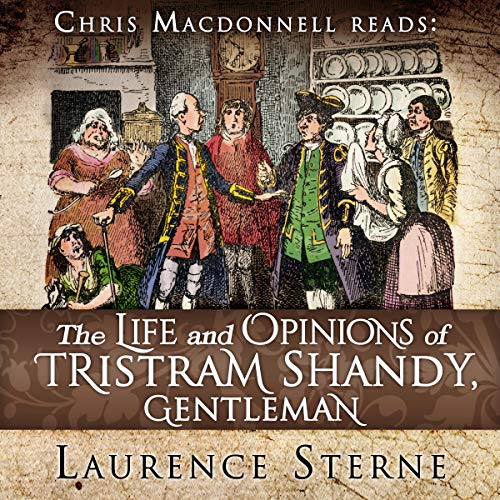 First published in nine volumes over the years from 1759 to 1767, The life and Opinions of Tristram Shandy, Gentleman is a, comic, bawdy, humorous, satirical novel.

It purports to be the autobiography of Tristram Shandy beginning at his conception but, famously, Sterne's egoistic character digresses and side-tracks the listener with so many colorful observations of his family and cast of supporting characters that his birth doesn't take place until Vol 3.

The printed work contains many whimsical, graphic jokes such as a page on which appears just a straight line, another a "squiggly" line. Chapters are missing (one chapter of 10 pages he says he tore out as irrelevant) or blank, but then referred to and told at a later stage. Some pages consist of just asterisks or dashes, all representative of some thought process or passage of time.

Throughout the narrative he addresses his reader directly and there are many instances of him having imaginary conversations with the "Sir" or "Madam" he imagines his reader likely to be. Extremely experimental in its time, Tristram Shandy now appears avant-garde and is one of the most influential works of literature to be found.

Schopenhauer described Tristram Shandy as arguably, one of the greatest novels ever written and Nietzsche described Sterne as the most liberated spirit of all time.

What listeners say about The Life and Opinions of Tristram Shandy, Gentleman