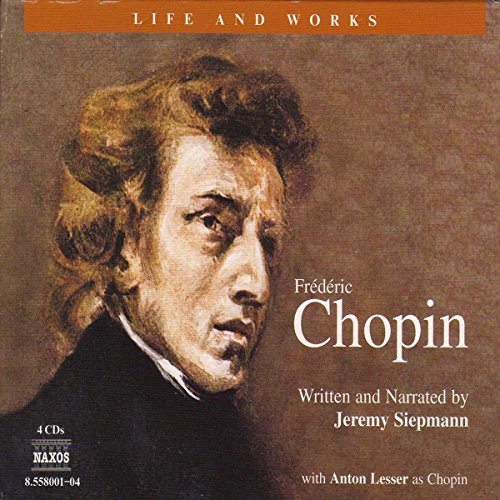 Frédéric Chopin is the pianist-composer par excellence. Regarded as one of the most mesmerizing performers of his day, he lives on in his music – his waltzes, mazurkas, études, preludes, nocturnes, three piano sonatas, two piano concertos, and much more. Here, his life, from his birth in Poland, his famous affair with the French writer George Sand, to his death at the age of 39 in Paris, is told with his music featuring prominently. We think of Chopin as a "frail, sheltered genius" but this forthright portrait demonstrates he was far more boisterous than that.

Cheerful as a youth, it was only later that the glare of publicity, the change from local to national celebrity, made Chopin guard his privacy more carefully. This is clearly presented in Jeremy Siepmann’s sympathetic account of the life of one of the key figures in Romantic music, and emphasized in the very personal portrayal by the English classical actor Anton Lesser. The accompanying booklet is packed with extra information about Chopin’s life and background.

What listeners say about The Life and Works of Frédéric Chopin

Beautifully crafted Portrait of Chopin and his major works. Amazingly informative given the relatively brief volume. A major strength is that the author skillfully allows the music to inform the reader. Works are beautifully and skillfully performed.

A major weakness is lack of an accompanying list of performed works as well as information about the pianist.

Highly recommend this audiobook for both pianists and non musicians alike.

Great review of Chopin’s mazurkas, polonaises, and a little on his waltz’s. I would have really liked to learn more about his Nocturnes and more on his Waltz’s since they are some of his most known work and accomplishments. Also, Chopin was always very driven by the female voice in operas. This was mentioned only once. Overall- I loved it. It takes an angle on Chopin that you wouldn’t otherwise have heard and the music is played very well throughout the audiobook.