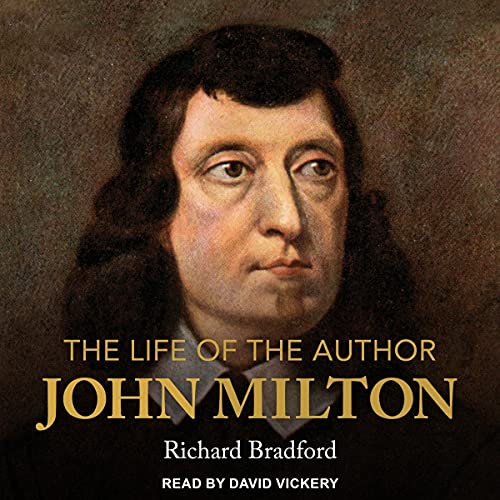 The Life of the Author

It is hard to overstate the role that John Milton played in the historical, political, and literary controversies of 17th-century England; his writings and very life challenged the status quo. Struggling to reconcile his private beliefs with his involvement with a radical political experiment, a republic which involved the killing of the monarch, his star rose and fell several times during his life. Married three times, struck blind at a cruelly early age, he was a famed pamphleteer and political activist whose revolutionary political credos placed him in mortal danger after the Restoration.

This fascinating new biography is divided into two parts. The first separates the man from the myth, and elucidates the complicated details of Milton's life from his early years as a literary artist uncertain of his destiny, through his work as a propagandist for the Cromwellian republic, to his rewriting of the Old Testament story of the Fall as a poetic allegory of more recent history. The second looks at how biographers and critics from the 17th century to the present day have distorted and manipulated the personality of Milton to suit their biases.

What listeners say about The Life of the Author

Richard Bradford’s study of John Milton (1608-1674) is comprehensive, detailed and accessible without being patronising, It makes clear why Milton is such an overpowering figure in literary and political history. His life, poetry, prose works and pamphlets are presented here showing how revolutionary and courageous Milton was.

Having retired after Cambridge to “read” for several years, he furthered his intellectual enquiry by travelling - on horseback - across Europe before he was required, unsurprisingly, to leave Rome. It’s a fascinating journey. Bradford quotes generously from the poems to illustrate how through allegory he states his views which after the Restoration were dangerous to voice or hold. Paradise Lost, for example, is an allegory of what Milton saw as the lamentable state of England under Charles 1 as well as a working out of his hugely advanced ideas on divorce and the freedom to think and believe according to one’s conscience, not as proscribed by reformist church groups or an all-powerful monarchy.

As a propagandist for Cromwell’s republic, and an enormously influential and prolific pamphleteer, Milton explored amongst many contentious arguments the conflicts within ecclesiastical doctrine (difficult for us now to understand the passions involved, but they’re clearly explained), and his advocated divorce laws which seem in contrast almost contemporary (no doubt fed by the first two of his three marriages, the third one contracted in his late fifties when he was blind).

The second part of Bradford’s book runs through the enlightening critical assessments of Milton and his works from the 17th century up to this one – censored by Samuel Johnson, a hero of the Romantics, to the post construction critical analysis with a fine range of ideas on just who or what Satan represents.

The book is a mine of interest well read, a boon to serious students– even if David Vickery mispronounces the poet Southey.