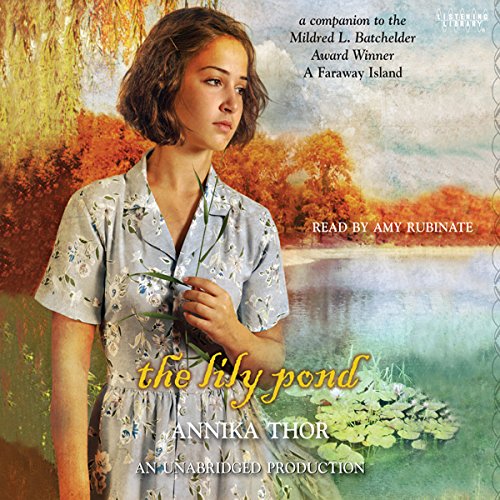 A Mildred L. Batchelder Honor Book and an ALA-ALSC Notable Children’s Book, The Lily Pond continues the story of two Jewish sisters who left Austria during WWII/Holocaust and found refuge in Sweden.

A year after Stephie Steiner and her younger sister, Nellie, left Nazi-occupied Vienna, Stephie has finally adapted to life on the rugged Swedish island where she now lives. But more change awaits Stephie: Her foster parents have allowed her to enroll in school on the mainland, in Goteberg. Stephie is eager to go. Not only will she be pursuing her studies, she'll be living in a cultured city again - under the same roof as Sven, the son of the lodgers who rented her foster parents' cottage for the summer.

Five years her senior, Sven dazzles Stephie with his charm, his talk of equality, and his anti-Hitler sentiments. Stephie can't help herself - she's falling in love. As she navigates a sea of new emotions, she also grapples with what it means to be beholden to others, with her constant worry about what her parents are enduring back in Vienna, and with the menacing spread of Nazi ideology, even in Sweden. In these troubled times, her true friends, Stephie discovers, are the ones she least expected.

What listeners say about The Lily Pond

Would you listen to The Lily Pond again? Why?

Yes, and I have recommended this book and Faraway Island to adults and friends with young adult readers in the family. Excellent read, quality of thought, quality writing, great stimulus for discussion of values.

This book and others, such as

Which character – as performed by Amy Rubinate – was your favorite?

Steffie: The story revolves around Steffie. She is a believable and likable character who shows growth through challenging experiences.

Amy Rubinate's reading helped make the characters come alive resulting in both tears and a bit of laughter.

I have found that books that ring true, as this series does, are worth discussing with young adult readers. The vicarious life experience allows for an honest discussion and exploration of values without preaching.