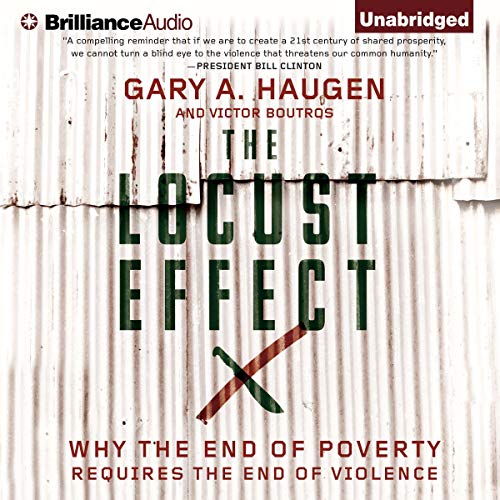 Why the End of Poverty Requires the End of Violence
Written by: Gary A. Haugen, Victor Boutros
Narrated by: Arthur Morey
Length: 12 hrs and 27 mins
Categories: Politics & Social Sciences, Sociology

While the world has made encouraging strides in the fight against global poverty, there is a hidden crisis silently undermining our best efforts to help the poor.

It is a plague of everyday violence.

Beneath the surface of the world’s poorest communities, common violence—like rape, forced labor, illegal detention, land theft, police abuse and other brutality—has become routine and relentless. And like a horde of locusts devouring everything in their path, the unchecked plague of violence ruins lives, blocks the road out of poverty, and undercuts development.

How has this plague of violence grown so ferocious? The answer is terrifying, and startlingly simple: There’s nothing shielding the poor from violent people. In one of the most remarkable—and unremarked upon—social disasters of the last half century, basic public justice systems in the developing world have descended into a state of utter collapse.

Gary A. Haugen and Victor Boutros offer a searing account of how we got here—and what it will take to end the plague. Filled with vivid real-life stories and startling new data, The Locust Effect is a gripping journey into the streets and slums where fear is a daily reality for billions of the world’s poorest, where safety is secured only for those with money, and where much of our well-intended aid is lost in the daily chaos of violence.

While their call to action is urgent, Haugen and Boutros provide hope, a real solution and an ambitious way forward. The Locust Effect is a wake-up call. Its massive implications will forever change the way we understand global poverty—and will help secure a safe path to prosperity for the global poor in the 21st century.

" The Locust Effect is a compelling reminder that if we are to create a 21st century of shared prosperity, we cannot turn a blind eye to the violence that threatens our common humanity." (President Bill Clinton)
" The Locust Effect provides a much-needed argument for reducing violence against the poor.... By reminding us that basic legal protections are not a privilege, but a universal right, Gary Haugen has issued a moral call to arms that informs the brain and touches the heart." (Madeleine Albright, Former U.S. Secretary of State)

What listeners say about The Locust Effect

Really worth listening to

Takeaway: “The temptation is to think that people that endure unimaginable pain and devastation are somehow different than me. Maybe they just do not feel like I do.”

Gary Haugen is the founder and head of International Justice Mission. Formerly a staff lawyer for the US Justice Department, Haugen started IJM to provide the legal services that are so desperately needed around the world. IJM is best known for its work freeing slaves around the world, particularly women and children in sex trafficking.

But the Locust Effect is more than an informational or fundraising book. The Locust Effect is a call for a refocusing of international aid’s emphasis. Traditionally international aid, whether government or non-governmental, has focused on emergency services (food or disaster aid) or individual or small group empowerment (economic development, building wells, education, etc.)

Haugen says that these traditional aid programs are important, and they have had a significant role in driving down the number (and percent) of people in extreme poverty. But during that same time, when those in extreme poverty have been dropping, the number in the next rung of poverty, just barely surviving, has been expanding. Haugen ties that plateau to the lack of functioning legal system and the prevalence of violence. Haugen is explicitly calling for international aid to take seriously the need for systemic legal reform in all aspects as the foundational step for all future aid.

Part of what is so important about this book is its systemic nature. Haugen is making the case that violence is a driver of poverty and prevents many from escaping poverty. He also ties the lack legal protections in much of the developing world to the history of colonialism and the legal structures that were put into place by colonial powers and rarely reformed after the colonial rule ended. So in many parts of the world, the legal system functions in the language of the colonial power, which is often not the language of the majority of the residents of that country. Or the legal system was intentionally structured to protect land owners, not the poor. Or the police are explicitly tasked with maintaining government rule, not solving crimes or preventing violence.

It is a much different scale, but I could not help but think of the Black Lives Matters protests as I read this book. The protests against police violence, the lack of adequate legal representation for poor defendants, the scapegoating of innocent prisoners to make police look like they have solved crimes are all things that Haugen points to as signs of a broken legal system. The difference is that in the US the majority of the legal system works just fine. The protests are about the relatively small (but important) areas where it is broken.

But in much of the world, the legal system is broken in incredibly unjust and at times mind boggling dumb ways. For instance, in Nairobi, rape must be investigated by a single doctor for a city of millions where hundreds of rapes occur every day. In other countries backlogs of cases are handled by the court looking at a case, for a single day. If the case takes more than that one day, the case goes to the back of the line and may take months or even years for the second day of case to be heard. So a prisoner may wait in custody for six or seven years for a minor offense waiting for the case to be tried.

The first several sections of the book are incredibly difficult to read. Haugen is recounting horror story after horror story of rape, murder and slavery, and how the powerful lack any accountability, while the poor are ground down. I was very thankful that Haugen spend the last sections of the book talking about realistic next steps and of examples of very significant improvements that have occurred recently when violence prevention and legal structure have been emphasized.

This really is not the easiest book to get through (digesting the content is hard, the actual writing is very good and the book is very well structured.) But if you have any interest in international aid, missions, the role of Christians in influencing politics and public policy, or the role of systemic thinking in Christian thought, this is an important book to read.

originally posted on my blog Bookwi.se

Must listen.., the poor are crying out!

The author did s great job laying out incredible cost to the poor and to the world! It was emotional and heart felt but backed up by hard statistics.
He also showed me that as hopeless as it looks it is not and why, as well as sharing concrete examples of success .

This book changed how I view poverty, justice, and development priorities. The author puts forward a compelling case for the need for better criminal justice systems in developing countries. He explains the reasons that prevent it, and lists practical steps to overcome them. It is both a distressing and a hopeful message. From now on, when I am considering a charity to support, I will look into their efforts in this area.

The narration was smooth, allowing the message to come out clearly.

One of the most important books

An absolute must-read for everyone interested in the end of poverty. Go read it now, and your understanding of the developing world will be significantly changed.

This audiobook was so depressing I could not finish it. I couldn't listen to it for any length of time. So I stopped and had no desire to go back to it for the sake of my own mental health. Also if you are the kind of person who needs trigger warnings, stay the hell away from this book. The part that I did get through dealt with rape and murder and the injustice that follows.
The narration is fine and the author's words made the situation really real, but maybe a bit too real and too maddeningly depressing.
I'm sure it is a 5 star book for someone with a stronger constitution than mine.

Challenging but worth it

I found this book challenging to listen to not because of the narrator or how it was written but because of the content. However, I highly recommend this book to anyone who is truly interested in understanding the roots of corruption, sexual slavery and all the other things that go on in so called developing countries..

Eye-opening view into violence against the poor

Gary Haugen is one of my heroes for his fearless work rooting out violence in the world's poorest places. His book documents the work of his organization, International Justice Mission, and the strategies it is employing to address the root causes of violence and improve the security and wellbeing of all the world's poor. It's difficult to imagine a more worthy cause or a better champion of that cause.

This is a must-read book for anyone who is interested in development in third-world countries and brining justice to all people.

A paradigm shift to development thinking

This book forces one to think about all the things we’re not doing to save the world. Yet it’s content is eerily familiar for one living in a developing country