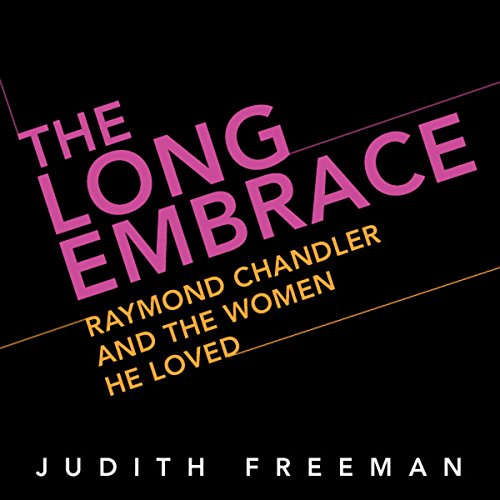 Raymond Chandler was one of the most original and enduring crime novelists of the 20th century. Yet much of his pre-writing life, including his unconventional marriage, has remained shrouded in mystery. In this compelling, wholly original book, Judith Freeman sets out to solve the puzzle of who Chandler was and how he became the writer who would create in Philip Marlowe, an icon of American culture.

Freeman uncovers vestiges of the Los Angeles that was terrain and inspiration for Chandler's imagination, including the nearly two dozen apartments and houses the Chandlers moved into and out of over the course of two decades. She also uncovers the life of Cissy Pascal, the older, twice-divorced woman Chandler married in 1924, who would play an essential role in how he came to understand not only his female characters - and Marlowe's relation to them - but himself as well.

A revelation of a marriage that was a wellspring of need, illusion, and creativity, The Long Embrace provides us with a more complete picture of Raymond Chandler's life and art than any we have had before.

"The Long Embrace may be the essential book on Raymond Chandler. Like his books, it offers a rational solution to a puzzle while at the same time retaining a sense of mystery." (The Chicago Tribune)
"A beautiful and original book....Freeman writes about L.A. with a tender precision and yearning that borders on the religious....Freeman's identification with her subject is so complete we feel we're there with Chandler too." (The Los Angeles Times)
"A compelling picture of present-day Los Angeles and a compelling dual portrait of Chandler and his wife....Ms. Freeman knows the territory as well as Marlowe himself....she feels the language and captures the mood. Like Cissy, when she crooks her finger, it's impossible not to follow." (The New York Times)

What listeners say about The Long Embrace

A fine portrait of Chandler

The research about Chandler's early life and his sad decline after Cissy died is interesting, as is the information provided about Cissy. One piece of information that might have been resolved: Freeman discusses Chandler's affairs during his Hollywood years and indicates that the Chandlers came close to divorce, yet Chandler's letters state that he was never unfaithful to her and that she was the love of his life. Both of these contradictory ideas are presented without a resolution, but that, too, might be just part of the method here.

Well worth listening to, and worth the patience that it might take to work through the first few chapters.

Separates the Wheat from the Chaff ... and Prints the Chaff

Raymond Chandler was a seminal author who lived an eccentric, virtually inexplicable, life. How did he become, at age 53, a significant, almost revolutionary, author of film noir after never writing anything more memorable than a spreadsheet for the oil company where he worked as an accountant for his entire pre-writing career? Why did he marry a woman 18 years older than he? Was he gay and, if so, did that affect his writing? Why did Chandler and his equally eccentric wife, Cissy, live a peripatetic life, moving almost every year of their married lives to a succession of 30 or so mostly semi-seedy, apartments?

These questions are raised, but, mostly unanswered, in “The Long Embrace”, a disjointed, not-exactly-biography that dedicates too many pages (or, if you listen to the audiobook, too many hours) tracking down Chandler and Cissy’s constant, perhaps, obsessive, moves in and around Los Angeles 70-80 years ago. Trust me, that search, loaded with irrelevant detail, is almost completely devoid of interesting information.

If you can persevere through all those pages about all those apartments, there are some interesting questions that do get somewhat addressed: To what extent can we read the enigmatic Chandler and Cissy into his various characters? How did the reclusive Chandler handle Hollywood, where he became a successful screenwriter? What did the snobbish Chandler think of the movies based on his books and how did he regard Humphrey Bogart, Dick Powell and the other actors who played Chandler’s creation, the iconic detective Philip Marlowe?

Chandler was such a unique, bizarre, brilliant, flawed character that there are inevitably some worthwhile moments in “The Long Embrace”. But they are overwhelmed by so many trips to so many apartments in so many parts of L.A. that they stand out like "a black widow spider on a piece of angel food cake".

A must for Raymond Chandler fans...

I truly enjoyed this book and the audio performance was excellent. If you are a Raymond Chandler fan you really need to hear this it gives you so much insight into the man's life. further, I enjoyed hearing subtle phrases and manners of speech that Miss Freeman inherited from Chandler. :) I suspect she put those there intentionally and it was a real treat to hear them when they came around.

I was unsure whether to buy and listen to this book because of the low star rating and what I considered might be ambiguous review extracts. However, I am glad that I bought it, although it will not be to everyone's taste.

Freeman seems to have become obsessed by Chandler as an author and of his marriage to an older woman. She wanted to write a book about these topics, but for some reason she put it off for many years. Eventually she decided to do it. She thoroughly researched Chandler's life, by accessing university archives as well as visiting the many addresses of places he lived, which seemed to give her real inspiration. The result is a very well written account of Chandler's life that is also really well read by Suzanne Toren. Toren gives a wonderful perfomance, and she has a voice with more than a hint of Lauren Bacall; perfect for this subject.

I imagine that the author is an academic, as she is so thorough in her research. Her prose is also out of the top drawer, which makes listening a pleasure in itself. In fact the prose is so good that you do not notice it. On the other hand, the narrative is a little re-enterant, with little eddys that come around and revisit an issue now and again. Also, although there is a lot of factual information, there is also a great deal of speculation, but that too is a pleasure of the book that Freeman has shared her obsession with us in such an open and compelling way.

This book gives us no insight whatsoever into its subject. It would seem the only qualification the author had for writing about Raymond chandler is the same as mine - that of having read his books! Her research seemed only to consist of visits to locations where he and his wife once lived! A complete waste of time and money!