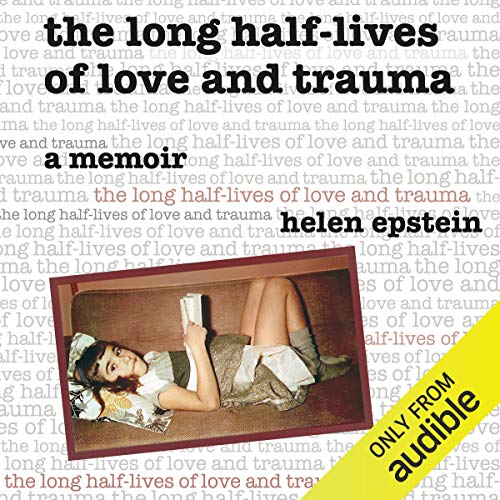 This intrepid memoir tracks sexual harassment and sexual abuse in the life of a veteran American journalist. It also describes the long and ultimately successful psychotherapy the author undertook to heal. The Long Half-Lives of Love and Trauma “invents its own genre,” wrote Sherry Turkle. “The author suspects sexual abuse in her childhood and investigates with the toolkits of an historian and ethnographer.” The result is a memoir that is what Eva Hoffman calls, “a true labor of memory, in which the story of the body is inseparable from the narrative of the self.”

This memoir is the third of a nonfiction trilogy, following Helen Epstein’s Children of the Holocaust: Conversations with Sons and Daughters of Survivors (Putnam, 1979) and Where She Came From: A Daughter’s Search for Her Mother’s History (Little, Brown, 1997), both widely translated. As Gloria Steinem wrote, “In Epstein’s hands, truth becomes not only stranger than fiction but more magnetic.”

“Clear-eyed, fearless, taboo-breaking.... This trilogy is unusual not only because nearly 40 years separate the first and last volumes - with the second positioned midway at the 20-year mark - but also because the works differ so greatly in style, structure, and content.... The Long Half-Lives of Love and Trauma’s major contribution is its willingness to talk openly and place forefront a personal trauma of sexual abuse in its post-Holocaust context.... Helen Epstein has consistently rejected sanitizing Jewish history - including women’s history.... She has refused to keep secrets that she knew needed to be told, and she has avoided idealization, nostalgia, and hagiography." (Irena Klepfisz, Tablet Magazine)

“Epstein takes the reader through her decades-long process of self-discovery, understanding, and healing accomplished through a strong bond of friendship, a solid and supportive family, and the powerfully restorative effects of psychoanalysis...written with page-turning clarity, openness, and complete honesty.... This is a ground-breaking memoir in style and in its contribution to the issues of sexual abuse.” (Berkshire Eagle)

Before I offer my own evaluation I feel I must address some of the issues brought up in the review just before mine by NMWriterGal.

1st, I gather that NMWriterGal has never had to cope with memories of abuse arising late in life after decades of suppression. Or any childhood sexual abuse at all. If I am wrong in this assessment, I apologize, but so much of her assessment seems to be based on lack of experience and understanding.

For instance: "But what really bothered me... is that on try number 3 at psychoanalysis, she goes back to someone she saw on try number 2 and spends the next 8 years not knowing if she can trust him and thinking he is going to ask her for a particular sexual act. What? What? What? He never does anything inappropriate, but the fact that she spent all those years not trusting him (thus not telling him what was going on with her, lying, etc.) got really old when listening."

First of all, this is a memoir, not a novel, and while you can interrogate a novel's protagonist as "not quite believable," this is the reality of Epstein's life. Most importantly, it is the reality of anyone who's had to sort out what's real & not real, and the problem of trust, especially of a woman in re: a male authority figure, is often a lifelong struggle. You doubt yourself constantly. One day you believe yourself and even an hour later you might doubt. One day you trust, and the next you don't. A child abused early in life whose experiences are not validated by ANYONE she is surrounded by will suffer constantly not only from not trusting others, but not trusting HERSELF.

Re: she worries about whether Dr M will ask her to engage in the very sexual act her "grandfather" forced her to do is in fact quite realistic. It doesn't matter if he's not done anything inappropriate. We are dealing here with a completely irrational experience in childhood. Recovery will inevitably involve questions like that, no matter how seemingly irrational they may be to an outsider.

As tiresome & repetitive as this book might seem to an outsider, as a woman who started recovering memories at the age of 45 after 10 years of questioning but fearing being disbelieved [in fact, one therapist said it wasn't possible for me to not remember something that terrible], I found this book hugely enlightening. And I've read countless other books on the same subject, including Judith Herman's mentioned, as well as The Courage to Heal, which was the first validation of the possibility/likelihood of suppressed memories of abuse I encountered. Indeed, my own trajectory [I am one year younger than she] has been very similar. While structurally similar [what would be "plot" in a novel], the details, however, are very different.

I have spent my whole life searching for memoirs and biographies that could help me comprehend my own story. So far, this one comes the closest. I'm still writing my own.

There are hundreds books like this, but we could have thousands and it still wouldn't approach what is needed by survivors. This one is particularly helpful because she incorporates her knowledge & experiences of holocaust survival families. Since, as noted in the book, 1 in 3 women have experienced some form of sexual abuse/assault in their lifetimes [this figure includes adult as well as childhood experiences], we are talking about 1/6th of the country's population and 1/3 the women. That is MILLIONS, and ongoing. And I've not included the male population.

While an outsider might find these books somewhat repetitive and tiresome, it is clear from that reviewer's response that she still has a lot to learn. This is why memoir matters more than fiction, because whatever one notices that may seem unrealistic, is in fact very real. So rather than challenge the author on her struggle with lack of trust toward her analyst, one should ask: what does this teach me about how survivors experience recovery?

Lack of trust -- especially of authority figures charged with caring for the child -- is at the very heart of childhood sexual abuse. It is a defining feature of the survivor's life & identity.

The worst aspect of being sexually abused by a family member or by a family member surrogate is that the person who is hurting you is supposed to be taking care of you. And that extends to the family members not paying attention or taking action. So not only can you not trust strangers, you can't trust ANYONE.

I have listened to this book twice and I will go through it a third time!

Read her other books instead

I read Children of the Holocaust: Conversations with Sons and Daughters of Survivors and I read Where She Came From: A Daughter’s Search for Her Mother’s History. Both were excellent. Epstein also came to speak to one of the classes I was taking in grad school, and I was very impressed.

This book...maybe if you're interested in sexual abuse of children and psychoanalysis, you'll love it. I didn't.

Epstein says 1 in 3 women and 1 in 7 men have been sexually abused (as children? or over a lifetime--I don't remember) and it seems as though all of these women (but few men) are publishing books about the abuse. I think I've had my fill. It may be an important subject but kind of like after reading a couple hundred books about the Holocaust, I just can't anymore.

But what really bothered me (aside from the fact that this could have been half the length so it wouldn't be so repetitive), is that on try number 3 at psychoanalysis, she goes back to someone she saw on try number 2 and spends the next 8 years not knowing if she can trust him and thinking he is going to ask her for a particular sexual act. What? What? What? He never does anything inappropriate, but the fact that she spent all those years not trusting him (thus not telling him what was going on with her, lying, etc.) got really old when listening.

At one point there's about one sentence in the book that implies her friends are a little bit tired of hearing the same stuff over and over. I listened to 8 hours; they listened to 8 years.

And then there was her friend Robbie...I sort of got it but I mostly felt a fair bit of annoyance listening to that too.

The first hour or so of the book was quite interesting, but, for me, it went downhill from there. I would have like more about her husband (who is probably a saint) and her sons--I'm not sure she even names them. It wasn't about them, but it would have provided some much needed relief from the misehgas!