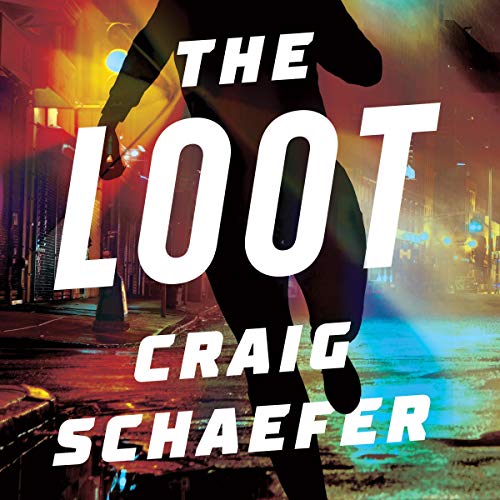 She fought for her country. Now she’s fighting for her family.

When Sergeant Charlie McCabe returns from fighting in Afghanistan, she hopes to leave the war behind. Instead, she comes home to a father whose gambling has put him in deep trouble with a violent loan shark. She finds work as a professional bodyguard, but to save her father, she needs to get serious cash together fast.

However, her father isn’t the only one who needs saving. When Charlie’s first client - a wealthy executive with a shady past - narrowly escapes a bomb plot, Charlie’s investigation leads her into the heart of Boston’s criminal underworld. Along the way, she stumbles upon clues about a diamond heist gone wrong that’s been unsolved for decades.

With the clock ticking and chaos descending, Charlie sees a solution to both problems, but it won’t be easy, and it won’t be pretty. A “normal” life may await Charlie on the other side of this mess, but part of her knows that the battle has just begun.

What listeners say about The Loot

I really enjoyed THE LOOT by Craig Schaefer. I've never listened to anything by this author before but will be looking at his previous books now.
The publisher gives a pretty comprehensive summary and to add to it would only provide spoilers.
The book is fast paced. Plenty of action, ammunition, hand to hand and strategizing.
Susannah Jones does an excellent job narrating.
If you have kindle unlimited this book is FREE to borrow with the kindle edition.
If you found this review helpful please indicate so.
Thank You.

All hail the Goddess of Superior Firepower

I'm a big Schaefer fan, and this is another great read. I sucked it down in one sitting, and it made for an extremely enjoyable experience. I love that Charlie, Beckett, and Dom aren't bound by the constraints of the law, and I thoroughly enjoyed watching them use their resources to not only get the job done, but to do so in a way that feels oh-so satisfying.

Susannah Jones is one of my absolute favorite voices to have in my head. She's one of the few narrators I'd follow to an unknown book.

All in all, an extremely enjoyable listening experience. Highly recommended.

Lately it's been a struggle to find any thing worth using my audible credits on. This mystery had a good story, good narration and an interesting female heroine. Plus it's free with Kindle Unlimited.

Good action but cliche characters. Stoic black guy. Heart of gold side kick and minor annoying villain that gets in the way of the real plot.

The first half was 5 stars, the second half was more like 2. Great early character establishment and ample stakes. Then it felt like the story was trying to turn into a jaunty movie heist that didn't quite pan out.

Charlie is back from Afghanistan and lands herself a job with a private security firm. Her bomb squad experience comes in handy on her very first case, but the troubled client has many more issues/ threats brewing. And, Charlie's father has gambled himself into a $20K debt with a connected loan shark. Said shark's goons come after Dad, and Charlie. When she bests them, they are out for than just the money. Then there is the missing diamonds, aka The Loot! Suffice to say there are several story lines intertwining with challenges, and it's up to Charlie and her new allies to overcome them all, almost simultaneously. Good Luck, Charlie!

Great story, believable characters, and pitch perfect narration. Recommended for fans of Craig Schaeffer and well written novels of any stripe that includes good guys, bad guys, and a palpable sense of place.

What a nail biter!

This was the second Craig Schaefer book I’ve read and I’m definitely hooked. The Loot has a great story-line, believable characters, and had me constantly guessing what would happen next. I especially loved the imagery- spanking a ketchup bottle! I never would’ve thought to use those words but I absolutely loved it! Susannah Jones does a fabulous job narrating. She really makes the story come alive and draws you in, especially those last few chapters. Her narration really notches up the intensity level. I will definitely be reading this book at least a few more times.

As a die-hard Schaefer fan, I’ll buy and read anything he writes. It’s good he writes in the genres I adore as a reader. The Loot is his first thriller novel. Having read all of Craig’s previous titles, I knew what to expect - an intoxicating flood of action, personal drama, and suspense. No supernatural elements this time, though.

Charlie (Charlene) McCabe is a leading character that you might recognize–a retired and worn soldier who hopes to leave the war behind. Unfortunately, her father’s gambling habit put him in deep trouble. Charlie wants to help him, but she needs serious cash to pay his debts before the violent loan shark teaches him a lesson. Because retired EOD (Explosive Ordnance Disposal) Technicians aren’t highly sought after in the labor market, she accepts a job as a professional bodyguard. When her client’s deadly secrets come to light, things go sideways, but there may be the long-lost loot to take away.

I loved the pacing of the story and its focus on the personal. Charlene no longer fights for the country, but she does for her family. I prefer smaller scale narratives so I loved her determination to save her father from himself and dangerous bookie while simultaneously trying to explain the attempted murder mystery.

In terms of character development, Charlie is compelling in her own right, with her own personal demons that color many of the scenes. Her troubled relationship with her father gives readers even more insight into her mental space. She may be willing to dip her fingers outside of the boundaries of the law, but she’s one of the good guys. Some motivation behind the antagonists of this story seems a bit trite, as do their tactics. On the whole, though, the characters are well developed, with backstories and moments of introspection that make them memorable. I especially enjoyed stoic Beckett who may (or may not) have a lethal past.

The Loot is a gripping thriller, and possibly a beginning of the exciting series with Charlie McCabe leading the charge. I can’t wait to read the sequel.

can't wait to read the next book

loved this book, kept me turning the pages from start to finish. I wonder what the next adventure will be.