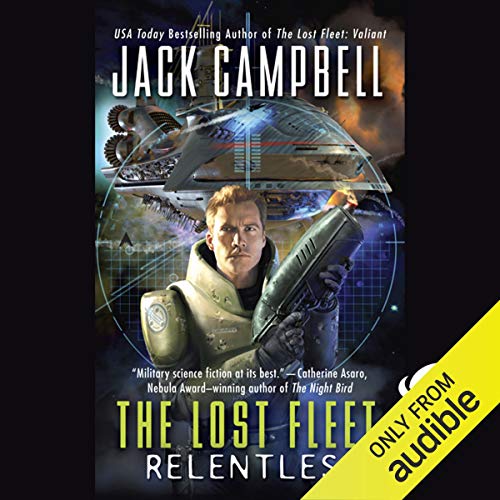 After successfully freeing Alliance POWs, "Black Jack" Geary discovers that the Syndics plan to ambush the fleet with their powerful reserve flotilla in an attempt to annihilate it once and for all. And as Geary has the fleet jump from one star system to the next, hoping to avoid the inevitable confrontation, saboteurs contribute to the chaos.

What listeners say about The Lost Fleet: Relentless

Listen to the complete series

This is a great book, but don't try to listen to it as a stand alone or before the first books. But this is a good thing, you get to listen to first four before this one! This I highly recommend!

I bought the first book in this series during the penny a minute sale and boy did that work out for Audible :) Throughout the first five books the story is excellent and the space battles are both intellectual and exciting (which is a rare combination). Our hero, Captain Geary, has to outwit both his enemies and his allies through many twists and turns. I can't wait for book six!

Was the Wait Worth It?

It absolutely was! Now, the previous reviewer is quite right, this book is a spectacular payoff to a long and heroing journey that has built to a thrilling sprint to safe territory. The thing is, that the challenges are growing more unforgiving for the men and women of the Alliance Fleet; they range from smarter enemies, to saboteurs and more mysterious threats. Along the way, the author also fills in some background about how the hero came to be where and when he is and why that has haunted him since his reawakening. The fantastic space battles are still here, and so is the very heavy, clawing urgency of military needs, the limitations of logistics, time and human mortality. The costs the fleet and its commander pay to get home are high, and reaching safety does not mean the end.
I could not believe the wait required for this book. I am entirely satisfied. If you read and liked the previous four, I&#8217;m sure you already have it or will get it at the earliest opportunity. If you haven&#8217;t read them, start with the first, Dauntless, and enjoy the ride as we all wait for the sixth book, Victorious.

I started the series with book one and have read in order. This is the next to the last book in the series and I can hardly wait to start the last book. Christian Rummel did an excellent job narrating the series. In this book the Fleet is almost into Alliance space and after a spectacular battle to free POWs the fleet finally discovers who the saboteurs are. Now they are almost home the Fleet is a cohesive fighting unit and the esprit de corps is there. One more book in the series then I am done I sure hope Campbell has some other interesting series to read.

Not Normally a Series Fan

Not normally a series book fan, I have really enjoyed this story, I am so drawn in I feel like a crew member of the Aliance Fleet.

I loved this series of books. Great reading. I cannot wait for the last book in the series. There is a lot of dialog that is very similar throughout the series, but it comes through as being natural. The writing is natural and doesn't seem forced. Cambell is a good story teller.

STORY (sci-fi) - Yes, this is an alien space battle series. I'm a female and don't usually like macho action stuff, but this series keeps me fully engaged, guessing and anxious for more. For one thing, it's fleet battles against alien ships, not bloody man-to-man fighting. Second, I really admire Captain John Geary, the main character and hero of the Alliance. Third, there's a lot more going on than just fighting Syndic fleets. Captain Geary also must juggle tense internal politics, saboteurs and other mysterious aliens who appear to be manipulating both the Syndics and the Alliance so their war will continue. Geary also has to keep peace between a female officer and a female politician, who both have feelings for him and are jealous of each other. At any rate, I enjoy this series so much that when it finishes, I plan to continue to the follow-up series as well.

PERFORMANCE - Christian Rummel is awesome. I've said that about every book I've heard him narrate. I don't know how someone with such a low sexy voice can portray women's voices convincingly -- and even two distinct women's voices!

OVERALL - I don't recall any cursing in this book, and there are no sexual situations. While men would be naturally drawn to this type of series, I highly recommend it for women, too. Listen to the series in order, as each book builds on the one previous, but each book can stand on its own as well. Go for it. This is good stuff!

Not a space warfare guy

I am not into all that military war stuff, but I cannot wait for the next one. This series continues its hold on me after every book.

One Of Sci Fi's Best

This series was absolutely one of the best to which I have listened. The author's detail in describing space travel at such distances and the detailed battle sequences are very believable. I could see them while I was listening and I was transported there. I hope the "Black Jack" Geary character will be back soon!

I could not stop listening Looking forward to the next one

The reading / performance by Christian Rummel is outstanding. The story and characters really coming to life. Sometimes I was thinking there were several readers in play.

Another good listen, interesting people more battles, but would have like little more than fleet battles. On saying that still has me wanting to buy next book and continue the story.

Starts with an overly long recap of the events thus far. Just in case someone starts reading a series with book five I guess?

However, I was not disappointed once the story and action started going. Most satisfying. Enough with the running. Actually looking forward to the next book.

Black Jack at his best !

Your wasting time reading this as you should aready have this in your collection !

I have really enjoyed this series and look forward to the next book and the new complexity that will be revealed.

almost there, just one more book and and then it's all over, until the next set of books and stories.

I really do love this series. There is plenty of action, adventure, thrills and disasters. The space fights are easy to imagine and follow...

Really glad that I (while a little tipsy...) decided to buy the full series when they were on sale last year.

One more book to go!

Series explains about some people and tactics, I have started to use the tactics in real life, in a good way like Geary ofcourse ;)

it really pulled me into the story and kept me on edge. Loved the main story as nd all the sub stories that were happening.