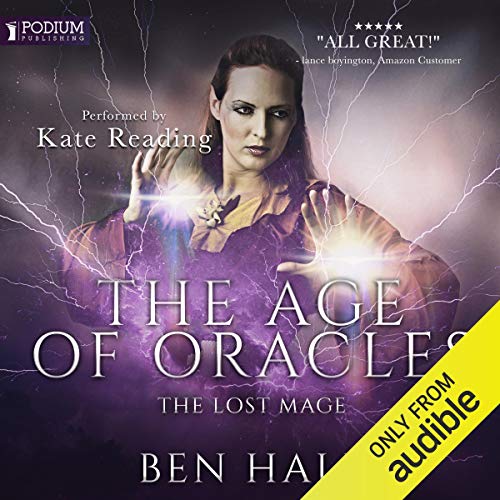 The oracles have always been the guardians of peace. Now they are the heralds of war. After a century of planning, their strike is swift and brutal. In a night of upheaval the kings and queens are cast from their thrones, their kingdoms replaced by a Mage Empire. The people are quick to resist but freedom lies in the hands of an outcast.

Hunted by soldiers and assassins, Raiden retreats to a final refuge. As he prepares his last stand an unexpected ally arrives at his door. She may be poisoned, but she is far from powerless. Together they will build a rebellion that will defy the Empire. As the world prepares for a mage war, one oracle is noticeably absent, and rumors abound as to her fate.

Betrayed by her oracle sisters, trapped in an anti-magic sphere, Alydian rots in solitude. Each day she fights despair and madness, and plots her escape. With her magic bound, even she believes she is helpless. But such power cannot be shackled. When it is unleashed Alydian will break mountains.

And the oracles that betrayed her.

What listeners say about The Lost Mage

ben hale never disappoints!
I love how he builds his world piece by piece, slowly allowing you to see the map and magic of it. I am excited to have seen the world when the oracles lived, and more excited still to see how it shapes up into the world I know from the white mage series!
keep up the great work!

This is a very addicting book.

I listened to a lot of books, but cannot remember cheering for characters as much as I did in this book.

When all seems hopeless, an interesting spin and a strange character turn the tide. This proves to be a story of betrayal, war, and how inner strength can turn the tide.

The development of the characters continues in such a bold tasteful way. The story takes you to the peaks and valleys without losing the spark of intrigue. Kate Reading has done an outstanding job narrating,she makes the characters come alive. I can not wait for the next book to come out Ben so chop chop. LoL just a bit of humor.

Great story, B+ writing, A+ narration

While the writing was a little derivative at times, mainly using cliche fantasy phrases, the overall quality of the story and character development was quite entertaining. The narration, as usual for her, was excellent. I'd definitely recommend if you like and of the other books set in Lumineia.

this might be one of my favorite series in the world of Lumineia. well worth the listen. come discuss on /r/lumineia.

Its a great story, looking forward to the next installment, but the narrator has a strange effection over her English accent which becomes annoying and offputting at times, pronouncing things strangely as though she is trying to fake her accent. Shame, because the story is good.

good story & well read. easy to listen to but before you know it you're at the end, where does all that time go??!!