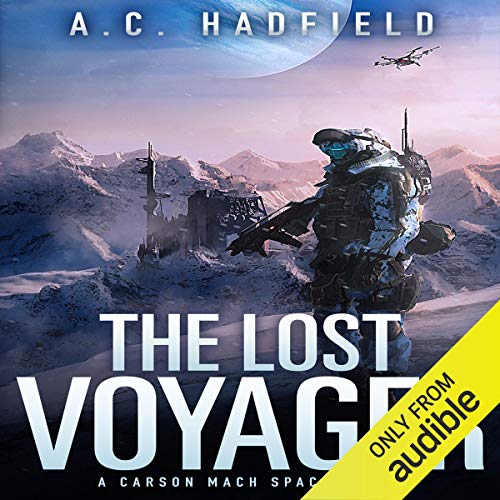 Its precious cargo could change the galaxy....

Unless one man and his crew can find the lost Voyager.

Carson Mach, a freelance rogue captain, and his crew are faced with a seemingly routine mission to find and rescue the Voyager, a missing mining ship in a remote system. Only he and his employers know what the lost ship carries in its cargo hold and the devastating consequences if it falls into the wrong hands.

On arrival to the Noven system, the destination of the Voyager, Mach and his crew have three planets to explore - and no clues as to where the ship and its artifact might be. Their first stop reveals a terrifying new enemy has joined the search, raising the stakes considerably.

If the new threat finds the cargo, it will place the entire galaxy in a perilous position from which it won't recover. Mach and his crew must overcome impossible odds and defeat the new enemy if they're to reach the Voyager and save the lives of trillions.

All Carson Mach stories are standalone adventures and can be listened to in any order.

"Carson Mach is a great character and I love the adventure he and his crew go on. Space Opera at its best." (Shirley Walsh)
"Pulse-pounding action, well-written space opera that I can't stop reading. I can't recommend this highly enough." (Gareth Walsley)

What listeners say about The Lost Voyager

Fun, fast book! Mr. Cendese does a great job with narration. The book is enjoyable and easy to listen to. I can't wait for the next edition and see what mischief Mac's team gets up to.

Not a bad listen

Took the almost all of the first audible book, to get into this listen, but as the plot grew I found my self actually feeling excited to find out how it ended, which was extremely enjoyable, I can honestly recommend this trilogy to anyone. If any of you listeners out there that enjoy " sitting on the edge " stories then this is a good listen. Going to have a look at A. C. Hadfield's other books to see if they live up to this trilogy.

As one battle ends for Mac and his crew. Another adventure was about to begin. After Mac and his crew found the Atlantis Ship. How hard could the next assignment be, right? Wrong. It gets very intense in The Lost Voyager. There is something very unexpected at the planet they are L-jumping to. It was told nothing lived there. Intel was wrong. They did find the Voyager ship and one member of the Voyager crew. Then things change, though !!!! The crew finds something they were not told about. Enjoy the listen !!!!

A slight twist from the first book

Would you consider the audio edition of The Lost Voyager to be better than the print version?

Don't have the printed book

What was one of the most memorable moments of The Lost Voyager?

The clash of the space freighter when they get attacked

Yep he did a good job

Had to listen to the whole story in one go.

If you could sum up The Lost Voyager in three words, what would they be?

How the author gave depth to the character even while they were searching for the secret cargo on the planet. There were high stakes on both the internal and external side. Sanchez' story especially was intriguing in this.

Smooth and gripping with consistence acting throughout.

The story was so-so, but the performance was dire. The voicing of female characters could only be described as mocking, and the rampant mispronunciations ('spindly') were simply cringeworthy.