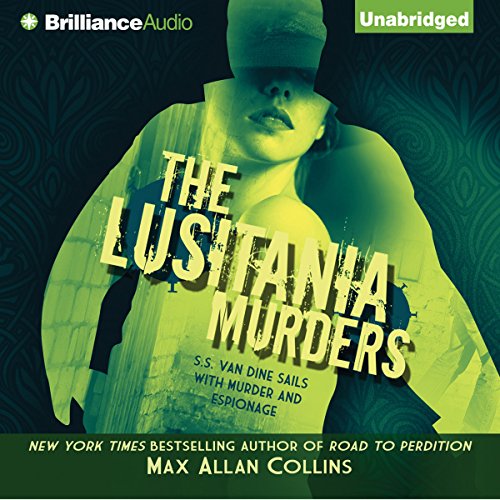 Under the pseudonym S.S. Van Dine, Wright has booked passage on what would be the luxury liner’s disastrous final crossing. He claims to be interviewing celebrity passengers, but the reporter is actually investigating rumors that the ship is ferrying an illegal cache of weapons to aid the British war against Germany. His investigation is put on hold when three German stowaways are discovered and then - in an unexpected and violent twist - killed.

Wright, also the writer of mystery novels, joins forces with lovely, über-competent Detective Philomina Vance to solve the crime. With threats of a torpedo attack hanging over the ship, the pair races to unmask the murderer and derail a conspiracy to take down the Lusitania.

I Want a Sequel!

This reminded my of an Agatha Christie murder mystery: a “predictable set of charismatic characters in a closed environment” style whodunit.

I loved the two main characters and their relationship; I really got into it and rooted for them, in fact at times I cared more about them than I did for the mystery. I want a sequel surrounded on their lives!

I was impressed with the author’s description of life aboard the Lusitania; I want to read a non-fiction book about it now.

I read it all in one shot on a flight; it was a great diversion since my media-screen wasn’t working and I could not watch any movies!

This work is a funny, sad, interesting, exciting, and ominous tale based on the facts of the death and destruction of the Lusitania.

A spectacular piece of writing... with such fabulous illumination on famous people at the time. This book also supports these famous individuals interwoven in true events, and the skilful telling of the world atmosphere in the early stages of World War 1.

Max Allan Collins has Done it again with Another wonderful historic mystery story, this time based on the sinking of the SS Lusitania in the early part of World War I. He inserts mystery writer SS Van Dine into the story and crafts a compelling and taut mystery. It’s a great story with excellent plot and characters.

Another good entry into this series

Intriguing plot with a well researched historical setting that readers of this series have come to expect. The factual information in the afterword is as interesting as the book itself.