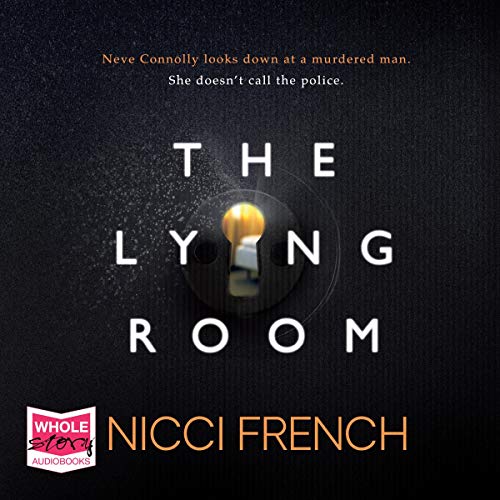 Neve Connolly looks down at a murdered man.

She doesn't call the police.

A trusted colleague and friend. A mother. A wife. Neve Connolly is all these things.

She has also made mistakes: some small, some unconsciously done, some large, some deliberate. She is only human, after all. But now one mistake is spiralling out of control, and Neve is bringing those around her into immense danger. She can’t tell the truth. So how far is she prepared to go to protect those she loves? And who does she really know?

And who can she trust?

Neve Connolly is all these things.

Could she be a murderer?

“'The hook of The Lying Room is chilling: a woman discovers the dead body of a man she knows and doesn’t tell a soul...Nicci French remains one step ahead of us as we race to unpick Neve Connolly's deadly tangle. Expertly paced, psychologically sharp, thoroughly enjoyable." (Louise Candlish)

What listeners say about The Lying Room

Missed these crime stories glad the are back after Frida Klein. well written well narrated. listen you won't regret it.

I quite enjoyed this book but it was narrated so fast that I felt really rushed though it!

brilliant story and easy and intriguing to listen to. very well read
loved it all

I was looking forward to this, but I'm sorry to say that I'm having trouble finishing it, for one reason: the performer goes through the text at such a rapid clip that it's quite tiring to listen to. You don't get time to absorb the story, or to get a sense of atmosphere; you just feel rushed. It's quite disappointing; I'd like to know what happens, but every time I think of listening to it again, I just don't feel like it.

I loved this book. The story is very clever what would you do if you turn up to meet your lover and find him murdered? Neave made a choice she decided to clean up the murder scene in order to protect herself and her family. What follows is a clever whodunnit as she try to unravel the mystery of what really happened. This book is well written with some good dialogue and very believable characters. The listener is kept hooked until the end and I did not predict the clever ending. A very enjoyable listen.

Seemed to go on forever. Too much about the minutiae of everyday life; I wasn't interested in what everyone had for breakfast... or dinner! And, had to suspend my belief more than I'm comfortable with at times.

Who did it and why?

I thoroughly enjoyed this book. It was a page turner from beginning to end. The detail of family life is vibrant and you can almost taste the descriptions of dinner. Neve is a person we know and it is like snooping on your friends life. Enjoy!

first time listening to any of her work and i love it. A pleasure to listen too
looking for my next peice of her work hopefully with the same narrator

This is not a patch on their Freda Klein
Novels which I enjoyed very much. The heroine is a dippy career girl who doesn’t seem to do much work yet manages to support an equally dull husband who never works at all ,has three children and has time for an affair.
The breathy narrator is a bit irritating too.

I really loved this. Well narrated and swiftly done no boring explanations of views. Interesting characters and a great mystery. Really enjoyed it.