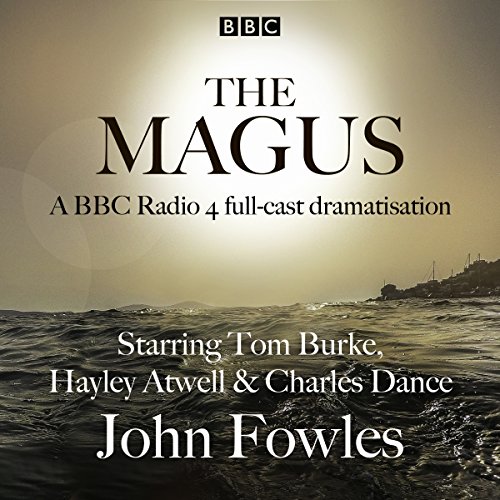 Nicholas Urfe, a young British graduate, runs away from his monotonous life to take up a teaching post on the small Greek island of Phraxos. There he meets the enigmatic figure of Maurice Conchis and slowly gets drawn into a world full of strange encounters and psychological tricks on Conchis' estate at Bourani.

When Conchis introduces Nicholas to the enchanting and mysterious Lily Montgomery, reality and illusion begin to intertwine. But what strange game is Conchis playing with Nicholas? And in this world coloured by artifice and deception, who is really telling him the truth?

First published in 1965, John Fowles' novel The Magus soon gained cult status. Now acclaimed dramatist and screenwriter Adrian Hodges (My Week with Marilyn, The Go-Between, Peter and Wendy, The Musketeers, Survivors, Primeval) has adapted the novel for this new dramatisation starring Tom Burke (War and Peace, The Musketeers) as Nicholas Urfe, Charles Dance (And Then There Were None, Game of Thrones) as Maurice Conchis, and Hayley Atwell (Agent Carter, Brideshead Revisited) as Lily.

Produced and directed by Heather Larmour.

What listeners say about The Magus

Listening to the book was enormously enlightening.

I will listen to this over and over, both for the text and for the wonderful.narration
Brilliant acting

Not worth the listen.

Dreadful adaptation of a wonderful book. Trite and over simplified. Take the time to read the entire book.

A wonderfully plotted drama with intriguing characters who deliver twists and turns when you least expect them.

A perfect combination of excellent drama, beautiful voices and wonderful talent. Gripped from beginning to end.