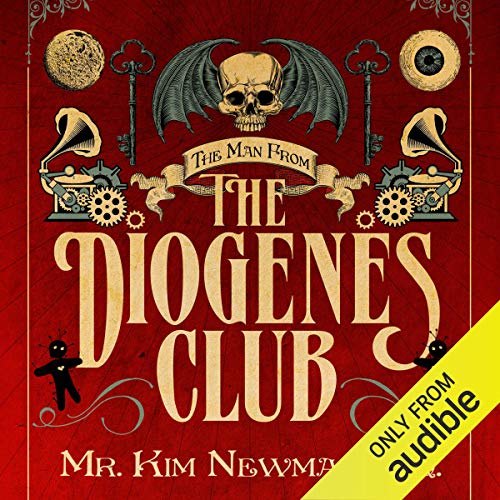 The Man from the Diogenes Club

The debonair psychic investigator Richard Jeperson is the most valued member of the Diogenes Club, the least-known and most essential branch of British Intelligence.

While foiling the plot of many a maniacal mastermind, he is chased by sentient snowmen and Nazi zombies, investigates an unearthly murderer stalking the sex shops of 1970s Soho and battles a poltergeist to prevent it triggering nuclear Armageddon. But as a new century dawns, can he save the ailing Diogenes Club itself from a force more diabolical still?

Newman's 10 mischievous tales, with cameos from the much-loved characters of the Anno Dracula universe, will entertain fans and newcomers alike.

He’s Still Got It

Kim Newman is, in my opinion one of the most criminally underrated fiction writers working today. He’s an expert at incorporating familiar characters we all know and love into a fascinating world in which we see our beloved literary, film, and television icons in ways we never have before. His new characters interact seamlessly with our favorite icons and his world building is top notch. His work is fun, insightful, clever, original, horrifying, nuanced, and has a surprising amount to say about our own world. I buy every KN work opening day because he consistently surprises and entertains. Definitely give it a look/listen.

You can't tell a book by it's cover or it's title - these are facts that I should have remembered before buying this audiobook.
I haven't read anything by Kim Newman, Esq. before but it seems he has a really big following. All I can say of this book is that it wasn't for me.

I liked Jefferson the main character, I even liked some of the supporting characters - but the majority of the development of the character was description of what they were wearing. In the case of almost every female it sounds like she fell out of the spare wardrobe department of Barbarella. I get that this is set in the late 60's/early 70's but come on- one more vinyl bikini and knee-high go-go boot and I might have started screaming and not been able to stop.

Would you ever listen to anything by Kim Newman again?

He has a wonderful voice.

Should be a television series. Great characters. I like how we get a flavour of the decades.

I took a chance on this as I'd always liked Newman's commentary on horror films etc. I am glad that I did, this was funny, suspenseful, silly, tongue in cheek adventures of supernatural sleuths. I want more!

Could not get past second chapter

Loved some of Kim's other books, but for some reason could not get into this one. Tired taking it up a couple times, but struggled to get to the second chapter.

Just couldn't get into it

This just didn't work for me. I bought it as another review complained that it was very like the Rivers of London series which I adore. I see what they mean, but I don't think it works as well. This book isn't sure if it wants to be an over the top pastiche or a serious parallel universe type novel. It is set in the 1960's but with modern touches and I'm not sure if that was the problem for me. Not a keeper.

Great book but the recording is significantly quieter than other books from Audible. A bit inconvenient when you listen in noisy places.

I reckon you've got to be a die-hard sci-fi fan to get into these tales. There are too silver space suits for my liking. I normally enjoy Newman's idiosyncratic style but these collection of linked stories are very much of their time and I'm not feeling particularly retro at the moment. I'm certainly not comfortable with this particular era of sexual, social and cultural upheaval. It's too awkward.

One thing of note, though, is the clear 'inspiration' for Ben Aaronovitch's Rivers of London series - if I hadn't started this book I'd never of known that Mr Aaronovitch was quite such a plagiari.......ahem....devotee of Kim Newman.

Funny but with a 'difficult to find' storyline

Would you try another book written by Kim Newman or narrated by William Gaminara?

No to Kim Newman but yes to William Gaminara

Would you ever listen to anything by Kim Newman again?

No, I was 4 chapters into this book but still had no idea what the storyline was!

Who might you have cast as narrator instead of William Gaminara?

It was funny. Perhaps you have be super quick witted to understand this book but as I listen at the end of a hard day, I was anything but 'quick'!

Funny with mentions of the Beatles and 5 other famous names in one sentence. It would appeal to some though.

fascinating mix of nostalgisk än specfic mashups. still it is only for those devoted to the genre to fullt enjoy the fun.

I loved the way the reader is drawn into the various adventures. The narration is simply awazing and without a doubt makes the world come to life!