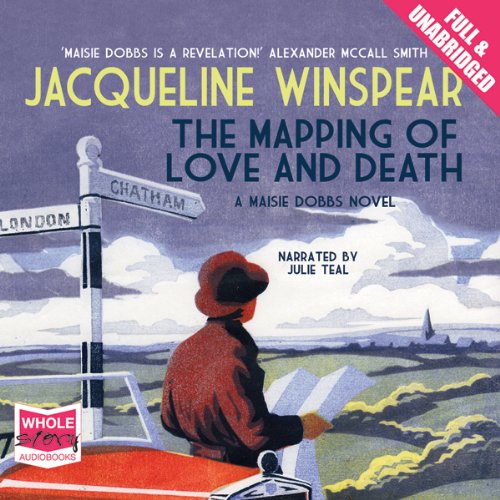 The Mapping of Love and Death

It's 1932 and the remains of missing cartographer Michael Clifton are found in a former battlefield in France. When it's clear he was murdered, his wealthy parents hire Maisie to find the woman who wrote a series of love letters discovered among Michael's belongings. The lover identifies herself only as "The English Nurse".

While tracking down the elusive woman in an investigation that ventures from London's most exclusive drawing rooms to its most downtrodden neighbourhoods, Maisie must also wrestle with memories of serving as a nurse herself in the Great War - memories that she has tried so hard to obliterate.

What listeners say about The Mapping of Love and Death

Enjoyed this, would like to listen to the earlier books in the series...

Enjoyed this - good characters and story, well written and well read. Would like to listen to all the earlier books in the series and not abridged versions of them (though I'm sure Emilia Fox's readings of books 1 and 2 (abridged) are very good).

Wonderful series of books, keeps you listening and interested from start to finish
Can't wait for next one

The Mapping of Love and death

A lovely book,nice characters and a great story line, I will be looking out for more from this author

Excellent tale, perfectly narrated. Several years ago I encountered books 1 - 6 of this series on disks at the local library, and had let my interest lapse as no book 7 was available then. I was most happy to find book 7 now on Audible and take up the series again. It was a joy to indulge in these characters again and to pick up the life of Maisie Dobbs.

Having lived at Brompton for several years as a child, my father being an officer at The Royal School of Military Engineering, I could fully picture the places and barracks mentioned there and in Chatham.

I enjoyed the theme of maps; the hopes and dreams of discoveries on Michael's land. How Michael drew maps. How others killed to obtain these maps and of how Maisie and Billy used a map to track their leads and progress in the case. Finally how the Dowerhouse estate, a place on a map, will change the contours of Maisie's future.

The last hour of the book I spent in tears as so many sad threads were tied up.

Superbly narrated by Julie Teal. I felt like it was a full day cast of actors!!
Robust plot, engaging characters, evocative sense of place, what a writer.
Highly recommend this book, important developments in the storyline of Masie Dobbs series.

A fitting last book in a quietly captivating series.

I enjoyed this story as much as all those that precede it. The pace is measured yet gripping. There is crime and investigation which intrigues without describing bloody and gruesome scenes. One’s imagination is allowed to supply such details. I found the pace of such a story well suited to the slower absorption of information offered by an audible version