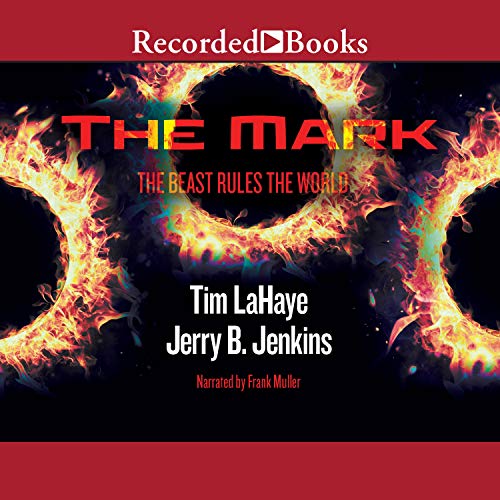 Those who were left behind after the Rapture must now make a crucial decision. Each person must choose whether to receive the mark of the beast, or die. Never has faith in God been more important for the group of believers called the Tribulation Force, who now face danger on all sides. Valiantly, they continue to urge new followers to accept Christ's love. Noted scriptural authority Tim LaHaye provides outlines for the vivid biblical prophecies in The Mark and the other books in the series. Best-selling author Jerry B. Jenkins creates the dramatic stories for each fast-paced apocalyptic thriller. With Audie Award-winning narrator Frank Muller's powerful performance, The Mark takes on additional dramatic force.

The Left Behind series has topped best seller lists across the country, been the subject of special features in national media, and captured the attention of Hollywood producers. With sales in the tens of millions, the Left Behind books are the biggest selling inspirational series of all time.

The story is decent, but the narrator detracts so much from it, it is hard to focus. His Carpathia voice sounds like Count Chocula and it is annoying to constantly hear his mispronunciation of Zion. I think I'll read The Desecration because it looks like it's the same narrator!

I LOVE the Left Behind Series. I read each of the books and am now listening to each on my ipod. It is such a blessing. However, the new narrator is TERRIBLE! He is difficult to understand and reads the story too fast! Unfortunatly, I see he narrates the next book too. I guess the authors realized because on Book 10, Richard Farrone is back!! Yeah! Rating on story: 5 stars / Rating on narrator: 0

I have to admit that I will complete the series, but look forward to making sure I don't get involved in such a pitfall again. The narrator, Frank Whatever, is aweful! What happened to Richard Ferrone? This new guy ends every sentence in a whispery lengthening draw that is just so distracting. The difference between the last book and this book is like getting slapped in the face and getting moved from the orchestra seats to the smelly part of a theatre. Zion is now pronounced something like Tseeon and characters are now infused with bad accents...like Fortunado. Was he always from Brooklyn? I guess the marketing rush of this series got the best of its audio half too. Bad enough 1/4 of the content in the beginning of the series was a repeat of the former books. This is how NOT to do a series. The intended content takes an effort to find. Wonder what's else is in store for us.

Not a fan of the new narrator

I have loved all of the books in this series so far. I still like the story, but am not a fan of the new narrator. His accents are horrible and pace too quick. (Half the charactes sound like Dracula and the other half Gomer Pyle.)

However, the series is great and if you made it this far, you really can't stop listening. I have blown through my Listener allotment, increased my subscription to premium and am three weeks away until the next month...

Why the narrator switch

Book is great like the previous 7 but the narrator switch is awful. If it wasnt for that I would give the book 5 stars. I abosolute can't stand Frank the new narrator. He seems to speed talk his way through the book and place extreme emphasis on the last word of every sentence. The speed at which this guys speaks is probably the worst aspect of the book, it can get very confusing on who's talking and whats going on if you miss one word. On top of all that the narrator went ahead and pronounces half the names of characters differntly too.

Sure Miss Ferrone as Narrator

While this 8th book in the series is as good as the 7 prior, I sure miss Mr. Ferrone as narrator of the unabridged versions. Mr. Muller's character accents took some getting used to.

Why the change in reader?

The reader on this book is terrible, I wish I knew why they deviated from using Richard Ferrrone. This reader is ruining the book for me and I can't wait for it to be over. This reader can't even pronounce the names of the characters correctly. The book itself is great as are all of this series, but I can't wait til I get to the next book and back to Richard Ferrone.

I have read this book twice. In listening to it I was quite disappointed. This narrator takes a lot away from the story. He CONSTANTLY mispronounces Tsion, saying it as "tsee-on" instead of Zion.
He also mispronounces the name of others and his character accents are so distracting it is rediculous. He is such a stark contrast from the narrator of the first seven books it was hard to keep up with the story. I definately agree with one of the previous reivews that his Carpathia voice sounds like a cheap Dracula movie.

Thankful for LaHaye and Jenkins

The difference in narration styles between Muller and Ferrone did not bother me as much as it apparently did some others according to reviews I’ve read. Considering his origin according to this story, why shouldn’t Carpathia sound like Dracula? He’s a blood sucking creep. Why shouldn’t Fortunato sound like one of the “hammers” from The Godfather? He enjoys violence inflicted on innocents, at the behest of his beloved leader. Close your eyes and fall into the story. Let yourself be ministered to or evangelized, depending on which side of that line you fall on. Fell in love with this series when I read it years ago. Even more so now, listening and imagining all over again. Praise God for these two minister/storytellers. I’ve heard the same the truths they preach at Bible studies at my own church. Thank You, Jesus, for these men, their creativity, and mission. May LaHaye Rest In Peace. I am like Albie. When I get to Heaven, after seeing You Lord, Tim LaHaye is one of the first people I’d like to meet. His and Mr. Jenkins’ work has truly blessed my soul......

I had pretty much lost interest in this series. The story tends to lag, going no where fast. While I do agree that the switch of narriators was distracting (the accents were HORRIABLE) the last 1/4 of the book brought out the greatness I had felt in the first and had hoped to feel again. I am not a religious person by any means but found myself very moved by the actions of characters in this book to pay the ultimate price for their beliefs. Truely powerful and emotional moments for characters the reader knows very little about. In fact, I think that adds all the more to it. Hopefully this kind of direct confrontation (between the 2 factions in the book and the reader's own views) will continue for the remaining 4 books.

I’ve read this full series a few times over the years. Physical book, kindle and now audible. I enjoyed this book so much more being read to me as your mind can take so much more in. The story and plot are aiming as usual. I have to say this and the later books are my favourites. I am nearing the end of this now and feel quite sad. Have the next to start after I’ve finished so looking forward to that. Narrator at first took a while to get used to but loving his Nicolae carpathia impersonation.

Great story. Not so keen on the reader. Reading too "breathy" and the kiwi accent is a joke.
This guy reads too fast, too . He does do the voices well, though