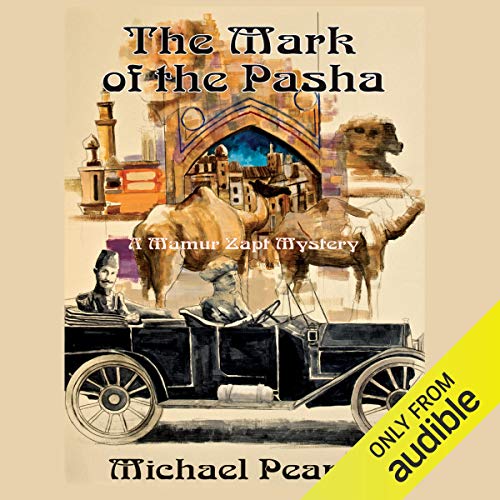 Gareth Cadwallader Owen is the Mamur Zapt, the Head of the Khedive's Secret Police. However, unlike his British colleagues, Owen works for the Khedive. It's not a comfortable perch, as agitation for political and social restructuring grows. Furthermore, Owen is married to a pasha's daughter, Zeinab, herself straddling a cultural divide.

The Khedive has declared a procession. He's going to drive around Cairo with his ministers. Owen, who has spent his career defusing political time bombs, learns from his agents that the streets have been made dangerous by threats of real bombs.

The first order of business is to ward them off. The second is to ensure the safety of an impending major European delegation to the capital...

What listeners say about The Mark of the Pasha

Give you good view of the complex relations between Egyptians and the British . The further tensions of Women trying to throw off Patriarchal control . Interesting excellent narration of much missed Bill Wallis . My Grandfather was a staff Sergeant Saddler in the workshops in Abbassia Barracks in the late 1920's much of the story's and attitudes of the British towards the Egyptians sound pretty accurate .

a good story, and very well read. the second one we have listened too. listen!

What did you like most about The Mark of the Pasha?

Michael Pearce brings early 20th century Egypt to life with his stories about the Mamur Zapt and there is a lot of context for the current uprisings we see on the news in the summer of 2013.

The mamur zapt, Captain Owen is Welsh, and sometimes feels British and other times feels more sympathy with Egypt than Britain. He solves problems in an unorthodox way which often confounds the bureaucracy of the day.

Which character – as performed by Bill Wallis – was your favourite?

Bill Wallis reads(performs) the book well, with a gentle narrative tone, but there is clear distinction between the characters and their motivations.

I would not make a film of my favourite books as films seldom capture the clever narratives and nuances of character that emerge when reading a well-written book.

More of Michael Pearces books need to be made available electronically and via audible, as they have a good story combined with an historical perspective of the country through the eyes of its citizens, both temporary (British army and "advisors") and permanent (Egyptians, Copts, Armenians, etc)