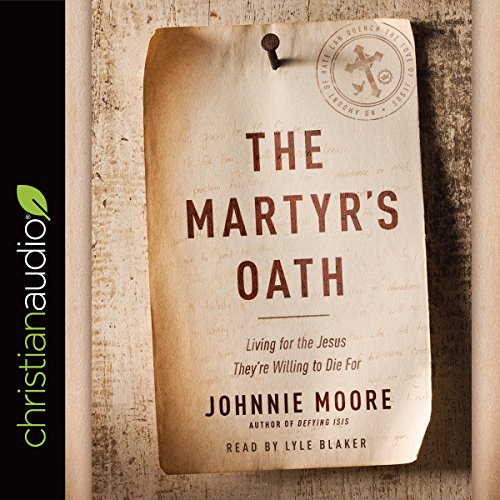 Living for the Jesus They're Willing to Die For
Written by: Johnnie Moore
Narrated by: Lyle Blaker
Length: 5 hrs and 16 mins
Categories: Religion & Spirituality, Christianity

We are witnessing an astonishing escalation in Christian persecution like we have rarely seen since the first century. Some say that every five minutes, a Christian is martyred for his or her faith. Countries like Egypt have experienced more Christian persecution in the last five years than in the previous 600 years combined. And who could have missed the atrocities of ISIS in Syria, Boko Haram in Nigeria, and the continued persecution of Christians in North Korea?

Johnnie Moore, like many American Christians, didn't fully appreciate the extent of what was going on - until he witnessed the graduation of theology students in India. Unlike graduation ceremonies in America - where feel-good speeches made by visiting celebrities are common - this one featured a remarkable oath. It wasn't an oath to excel or succeed. It was an oath to be willing to die, if necessary, for the cause of Christ. This was no empty promise. This was a choice, choosing the eternal over the temporal.

Johnnie knew he was witnessing a raw, first-century Christianity that his comfortable American version had shielded him from. "For the first time, I really understand my faith", says Johnnie Moore. Now, he's on a mission to give this same experience to others. He and his team have crisscrossed the world, recorders in hand, gathering eyewitness accounts from dozens of people who survived persecution - and the stories of some who didn't.

Join Johnnie Moore on this compelling journey to the heart of the Christian faith.

This book is the most powerful book I’ve ever read. It is shockingly informative and undeniably moving.
I simply couldn’t turn it off. I’ve listened to it three times in as many days. Thank you Johnnie for sharing this with the world!

These true believers must be 10 feet tall!

The inspirational stories shared in this book are moving and truly inspirational. In my opinion these believers must be 10 feet tall!

Initially, I thought " Oh here we go. one more book about how bad the Western church is. " Instead whayI got was encouragement in my walk with Jesus. Specific instruction on dealing with the enemy of our souls. Encouragement on praying for our brothers and sisters, and specific ways to help and be a part of this very special work for the LORD.

A wake up call for Christians.

All true Christians who want to serve Christ and increase the kingdom should listen to this audio. Christians are. dying worldwide to spread the word. Everyone can help by at least praying. God wants you to serve in your own special way. God. bless you.

Not what I expected, but compelling and heart wrenching. I recommend it to all Christians.

This book is another eye opener. Moore does a good job of recounting the accounts of several persecuted Christians around the world. He also challenges us in the Western World to live for the Jesus these persecuted souls are willing or have died for. What a conviction for us all to do more. Well done!

This was a revelation to me as a western school teacher to hear how hard people have life for their faith. It also inspired me to live out my belief that a ‘crown of righteousness’ is waiting for me.
I would love to use these resources in school to prepare students to live out their faith with confidence.
The quote about “take risks, not care” will become my mantra.
Thank you for his inspirational audiobook.