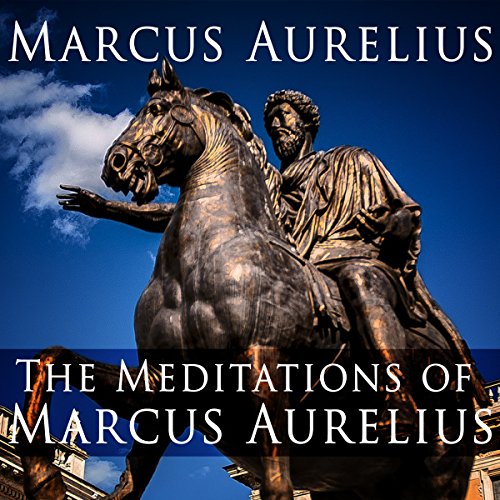 The Meditations of Marcus Aurelius

Meditations is a series of personal writings by Marcus Aurelius, Roman Emperor from 161 to 180 AD, recording his private notes to himself and ideas on Stoic philosophy.

The Meditations is divided into 12 books that chronicle different periods of Marcus' life. Each book is not in chronological order and it was written for no one but himself. The style of writing that permeates the text is one that is simplified, straightforward, and perhaps reflecting Marcus' Stoic perspective on the text.

Depending on the English translation, Marcus' style is not viewed as anything regal or belonging to royalty, but rather a man among other men, which allows the reader to relate to his wisdom. Marcus Aurelius wrote Meditations at his base in Sirmium, in modern Serbia, and also while positioned at the city of Aquincum, while on campaign in Pannonia, which included modern Hungary.

What listeners say about The Meditations of Marcus Aurelius

The Meditations of Marcus Aurelius has been translated and retold dozens of times, you can find a ton of these books on Amazon, but I have to say I really enjoyed this book better than the others.

Marcus Aurelius was a stoic, a person who accepted things as they came. A strong believer in destiny or fate there is no need to rail at God for imagined slights. Simply see things for what they are, and live through it. Reason also plays a key role.

I really believe that this is most likely one of the first self help books to have been written. It is also very positive, in spite of what you think of stoicism, and impresses the need for loving one's self. He was so in touch with himself that he tried to avoid becoming Emperor, and eventually only cave into accepting it on the condition that he share the seat with his (adopted) brother.

There are a lot of quotes and phrases that should be infused into everyone's life found in this book, and I promise that if you listen you will not forget them, and eventually, you may find yourself living by them.

Waters really narrates this with some invigorating life and gravitas. You almost feel as if his channeling Marcus Aurelius more than mouthing his words. I give full credit for that. Even though I did receive a promo code for this review it in no way influenced my considerations of the material, and in fact, inspired me to be more honest. In fact, getting a code generally makes me harsher as a reviewer as I am more often concerned what someone like Me will decide based on my review.


If this review helped, please press the YES below. Thank you immensely!!!

Anybody who wants to learn should read/ listen to this book. It has a lot of wisdom that can be gained from reading it, although if you really want to gain wisdom, you should read Proverbs from the Bible. The book is very well organized .

Timeless Wisdom from an Ancient

It's amazing to me that someone from 2000 years ago could be right on so many things related to human existence! Granted, some of the concepts were antiquated (e.g. classifying things as fire, water, air and earth), but I would say that 70% of the material is applicable to people even today. This is probably because 70% of the material involves morality, having a good disposition, and displaying the proper emotional reactions to situations and circumstances that we encounter-as true today as it was 2000 years ago!

In fact, in this era of immediate gratification and I-am-the-center-of-the-universism, many of us could benefit by paying attention to the themes shared repeatedly in this work: that our time on earth is but an instant, that life's circumstances continuously cycle and repeat themselves, that the Universe is unfolding as it was intended; and that these notions should compel us to accept and be at peace with whatever life throws at us, to treat others well and to pursue goodness and truth at all times.

As for the narration: this is a book that requires a specific type of narrator to deliver the material effectively. The content is so dense with ideas and concepts that, if the narrator doesn't use the right cadence, pitch, intonation, etc., the material cannot be "digested" quickly enough by the mind. When this happens-as it did with me-you will find that your mind wanders. Also, I thought it was a mistake to include the "numbering" of each passage with the audiobook. I've heard it read without numbers, and I think it flows better without numbers.

I was provided this audiobook at no charge by the author, publisher and/or narrator in exchange for an unbiased review.

What made the experience of listening to The Meditations of Marcus Aurelius the most enjoyable?

I was given this free review copy audiobook at my request and have voluntarily left this review.

Excellent narration. I have the other version of Meditations, read by Alan Munro, and I prefer this reader -- a higher, clearer voice.

What other book might you compare The Meditations of Marcus Aurelius to and why?

What does Jonathan Waters bring to the story that you wouldn’t experience if you just read the book?

Brilliant, essential literature to understand the merits of Stoicism.

Good to have , at times hard to understand

An interesting book, but often difficult to comprehend because of the very formal language construction. I know written Latin was very formal in construction and therefore, this may be a faithful translation. I think, though, that it might have been more helpful if it was more toward the essence of what is being said and less toward the form. In the end, I am glad to have a copy.

This book was given to me for free at my request and I provided this voluntary review.

this was a good book nothing really too bad about it little hard for me to stay into it for long periods of time but I'm definitely glad I have finished it. there are definitely a couple pointers that I'll be using in my life practices. I will be listening to this book again in the near future.

not at all what I was expecting

If you can preview it before you buy it I would recommend that. so dry

Poor reading made this hard to get through

Interesting book, though the author comes across as one it would be hard to stir to action or caring. The reading though, frequently felt as though the reader didn't understand what they were reading, which sadly made Marcus Aurelius' Meditations harder to get through than they needed to be.

Incorrect translations and conflated inference. An American butchering of a classic. Waste of money and time, there are free versions of this which are immeasurably better.