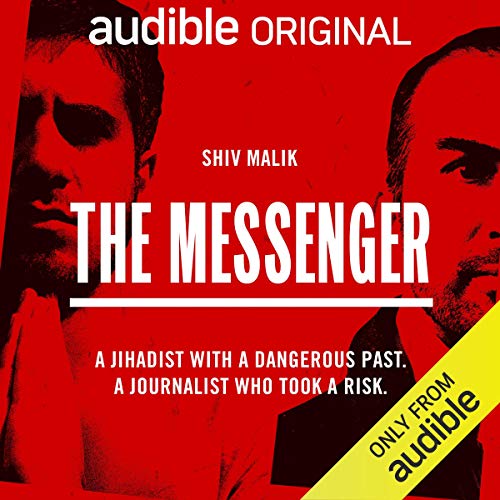 What listeners say about The Messenger

All the reasons democracy needs robust journalism and the sacrifices journalists make to hold the powerful accountable.

Heck of a story; audio has some sore spots.

First off, I almost never rate anything 'perfect' so view my 4stars in that light.

As one version of the saying goes, it ain't over 'til it's over. That sure applies here. An informative & interesting story that also contains twists to the twists. Bits of the audio were hard for me to make out but the reasons & instances were acceptable to me, within this story. This is one I'll come back to and replay a couple of times in the future.

Wow! Not what I was expecting at all!

A reporter is conned by his subject, or was he? The reporter wants to know why he fell for the con, but was he conned? At the end, the questions remain, the reporters family life and career are in shambles because the subject of his reportage conned him. But was he conned? You decide.

Intriguing non-fiction (or is it)

This was a great story describing the human experience. The concept of using actual recordings to enhance the story is great, IF the recording is discernible & of even modest audio quality.

The best podcast in 2021 until now

I binged this podcast in one set , it’s shocking, the host is a hero, and he sustained a great trauma after facing real evil, I also bought the book

Can’t get rid of this damn thing

Was memorized by the story and enjoyed it. Audio was hard to understand at times

kept me engaged my entire trip. gripping. I have never heard this incredible story. wow

A journalist caught in a web of disinformation

Shiv Malik is a young London-based journalist specializing in terrorism. He is excited to find what he thinks is the terrorist version of a defector. But then the story begins to unravel...

An interesting and honest memoir of what can happen when a journalist gets too caught up in his story. About three hours, perfect for a long commute.

A little bit too 'poor me'

I did enjoy this but felt like too much of the podcast was the author trying to get sympathy about how badly he'd been treated, as opposed to taking more responsibility and focusing on the story behind what had been truth and what had been a lie, which was what I was really interested in. At points I was tempted to stop listening because the constant 'poor me' narrative became too overwhelming.
The section about the police asking to see how recordings I found particularly grating - when should journalists protecting their sources take precedence over national security and stopping terrorism? And it seemed to me the press treated the police, who were just doing their jobs, very badly. It felt like the author was more bothered about trying to protect his precious book than a terrorist being stopped and lives saved. (even if it did turn out not to be true). After that section I really stopped sympathising with the author and was happy to rattle through the final episodes without properly focusing.
An interesting listen definitely but too biased for me.

I loved this podcast, to the point I ended up listening to every episode in only two sittings. It was informative and interesting, telling a highly personal and reflective tale of journalism within a UK and global political context that has impacted on is all. I'd highly recommend to everyone.

Gripping story of a journalist beguiled by his source. Incredible honesty and self knowledge from author Shiv Malik about his ups and downs as he tried for 10 years to get to the truth. Lots here that I didn't get from reading the book.

Full disclosure: I'm one of the people interviewed in this serial. (Cameo role only - but I won't hold that against them.)

Gripped from start to end.

excellent, highly recommend. Compelling story and well narrated by the writer who gives an incredibly honest, meaningful and soul bearing account of his journey into this investigation of twists and turns. Couldn't break away once I had started. Good job its Saturday.

Perhaps i was under a rock for a few years but i had no recollection of the events outlined here .. Superbly narrated and produced and a cliffhanger that basically saw me binge in one sitting ... Cant reccomend enough !

loved it truly heartbreaking moments of how someone life can get flipped upside down. I couldn't stop listening episode after episode.

I found the story very interesting and it really drew me in Shiv wrote a good story and does a good job narrating.

This is a fairly concise story spanning thirteen years, well written and told. In the real world of espionage and terrorism, you cannot have any really trustworthy friends.

This is addictive listening and really well read. I could not wait to listen to each chapter and very poinent footnote about all messengers in today's society

Good story due to poor journalism.

Good story but just highlights that "journalists" are only out to sell a story. Shiv tries to redeem himself but the last chapter shows he has the same narcissistic tendencies as Hassan. He could have pulled on "the loose thread but the story would unravel" so carried on to try and get a book out, sell a "story" and then deal with the "oh, must have missed that" afterwards (Last chapter). Both of them like the attention and both of then want their names on everyone's lips. Only difference is Shiv blames Hassan and doesn't accept his part in the whole circus because it wasn't the outcome he wanted.

loved it, amazing, captivating, brilliant thank you for sharing your story. absolutely have to get this book.

Quite interesting & informative .
Felt quite sorry for the author as he was duped by a professional liar.

Found it interesting and engaging. Definitely one of the better made podcasts I’ve listened to lately

True or Not - It's Believable.

It was a time in our lives where we wanted answers.
Wish you all the best and it was great listening to you.

It was super strung out to make the 6 episodes but interesting enough in the end.

I just wished it was longer! What a story and the honesty from the Author is inspirational.

Really interesting insight into extremists and the lies surrounding them. Very well spoken and researched.

loved this. fascinating story told with honesty and self reflection about how a journalist bought into a fantasist's world, only to destroy his own. loved the narration and interviews too

Intriguing story...well done for persevering with the book & podcast. Will recommend to my friends.