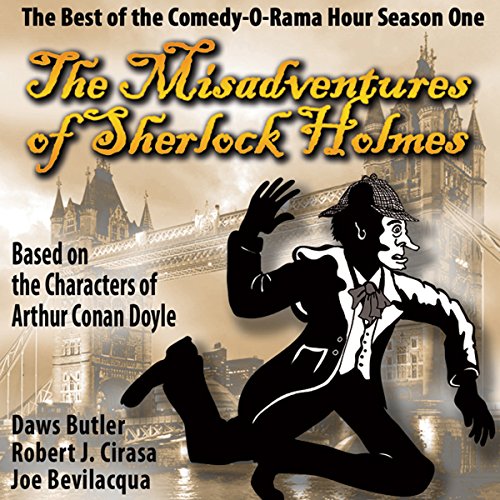 The Misadventures of Sherlock Holmes: The Best of the Comedy-O-Rama Hour, Season One

As heard on Sirius XM Radio and NPR stations!

Comedy and mystery are happy bedfellows in The Misadventures of Sherlock Holmes. Veteran award-winning radio producer Joe Bevilacqua’s 10-part radio theater series pays humorous homage to the classic characters of Sir Arthur Conan Doyle. The stories are filled with sly references to the original "canon", as it is called. Even the Baker Street Irregulars and other Holmesian groups and scholars have enjoyed this about the series.

Titles include: Episode One: “The Mystery of the Creepy Hack Writer”; Episode Two: "My Dinner at Baker Street"; Episode Three: "Sherlock Holmes in Trouble"; Episode Four: "A Study in Lavender"; Episode Five: "The Death of Mr. Sherlock Holmes"; Episode Six: "The Giant Rat of Sumatra"; Episode Seven: "Tales from the Vienna Wards"; Episode Eight: "His Second to Last Bow"; Episode Nine: "Revenge of the Beekeeper"; Episode Ten: "Holmes' Creepy Christmas". For more about The Comedy-O-Rama Hour, go to: http://www.comedyorama.com

"Fans of the legendary figure of Sherlock Holmes are sure to get a kick out of this. These full-cast audio productions include the voice talents of Vernon Morris as Sherlock Holmes, Henry J. Quinn as Dr. John Watson, Jan Meredith as Miss Hudson, Ed Hyland as Professor Moriarty, and William Gillette as Arthur Conan Doyle. Other voice artists include Terry Price, Gwendolyn Lewis, B. H. Barry, and Joe Bevilacqua. Don’t worry if you aren’t familiar with these names, their voice characterizations are as good as any you’ll hear. Like I said, fans of Sherlock will get a real kick out of these comedies. Personally, I’m not very familiar with Holmes, but I got a kick out of these anyway. The humor is sometimes campy and sometimes rather clever and subtle. And the acting and sound effects are of the highest quality." (Audiobook Heaven, audiobook-heaven.com)

If the Holmesian canon is sacred to you - avoid this book. If, however, you want a good, sarcastic, ironic, well written AND even say silly pastiche, this is your baby. Nothing is sacred - not even the ideas brought forth from the authors themselves. A right jolly romp. BTW The Giant Rat of Sumatra is finally unhinged - as it were.

I'm still trying my best to forget I ever listened to it. Well, Most of it anyway.