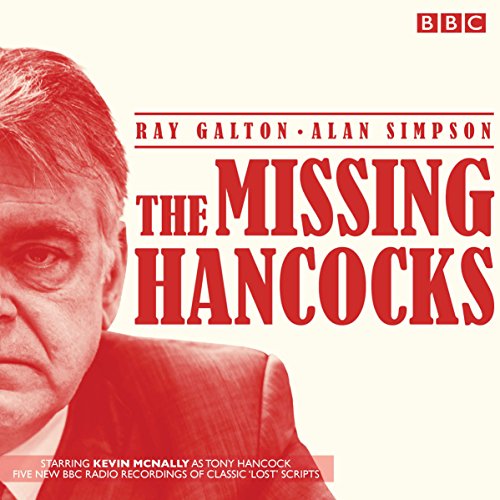 Kevin McNally stars in five brand new recordings of original Hancock's Half Hour scripts by Ray Galton and Alan Simpson. Whilst Hancock's Half Hour was an enormously popular radio sitcom in the 1950s, many of the episodes were not retained in the BBC Sound Archive and are believed to be lost.

Now, five of them have been recreated by BBC Radio 4, with Kevin McNally taking the role made famous by Tony Hancock. Among the supporting cast are Simon Grenall, Kevin Eldon and Robin Sebastian.

What listeners say about The Missing Hancocks:

What made the experience of listening to The Missing Hancocks: the most enjoyable?

It was a real nostalgia trip. Galton & Simpons scripts could of been written yesteday.

I laughed so much. The Kenneth Williams guy was perfect.

As good as the original!

I was dubious for a long time before downloading this - first - of the missing Hancocks. Now, I wish I'd downloaded it sooner. Brilliant. Easy to forget this is not the original cast. If you've got Hhh-hancock's Half Hour 1 - 6, then 'Missing' 1 - 3 is ESSENTIAL! Great fun.

Would you consider the audio edition of The Missing Hancocks: to be better than the print version?

A great reincarnation of the original comedy moments, please do some more!!!!!

What does Kevin McNally and Full Cast bring to the story that you wouldn’t experience if you had only read the book?

Brings it all to life

Laughed many times and marveled how good itwas

Can't get much better than this

These recreations of the Hancock missing radio shows are an absolute must. The scripts are so funny even in 2020, the cast fabulous. Every now and then something combines to make you feel really good and you can replay these and find something new to enjoy. Brilliant.