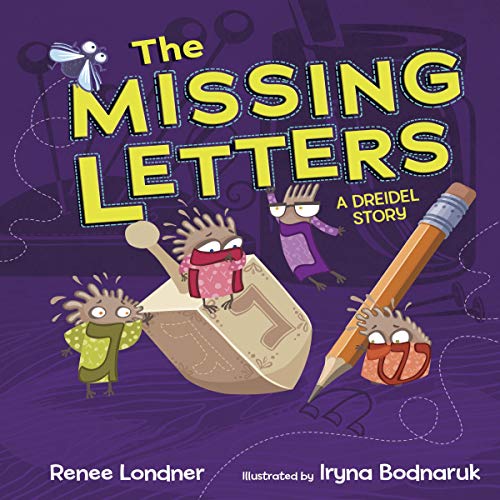 It's almost Hanukkah, and the dreidel-maker's shop is busy. But all is not well for the four Hebrew letters that will soon go on the wooden tops. The Heys, the Nuns, and the Shins are jealous of everyone's favorite letter, the Gimel. They decide to hide the Gimels so that the dreidel-maker can't use them. But then, the other letters learn that the Hanukkah story wouldn't be complete without the Gimels! Is it too late for the missing letters to be found?

"Everyone knows that when the dreidel lands on gimel, it’s winner take all. No wonder all the heys, nuns, and shins in the dreidel-maker’s shop are so resentful: what can compete with gimel’s popularity at Hanukkah? 'When the dreidel stops on me, they have to add to the pot,' grumbles a shin, as the letters engage in misery one-upmanship. But what if all the gimels went missing? Maybe the rules of the game - and the letters’ pecking order - would change? It’s an ingenious idea for a story but, alas, not a fully realized one. Bodnaruk’s illustrations feel unfocused and fussed over, and she struggles to turn the letters into vivid characters (they resemble blobby brown imps in colorful robes). Londner capably channels the letters’ jealousy (and Jewish inflections), but she brings the story to a halt midway to explain the dreidel’s backstory and prove that it is no mere toy." (Publisher's Weekly)

"Set in the wood carver’s shop as the festival approaches, all the separate pieces of the dreidel are ready to be assembled. They come to life. Letters nun, hey and shin are jealous of gimel, popular with players because of its promised gains. They decide to hide the gimels so they cannot be pasted onto the dreidel form, then rules will have to change; the other three letters will have a happy ending. The concerned dreidel maker explains to his apprentice that all the letters as well as the spinning top are important in Jewish history: they are more than toys. In the days of the Maccabees as in other times, Jews were not allowed to study Torah. They did so in secret. When soldiers came to check on their activities they found the students playing dreidel rather than pouring over the Torah scroll. This bravery made the dreidel a Hanukkah tradition. In vain, dreidel maker and helper tear the shop apart to find the missing gimels as there is no time left to carve them again. That night the three letters pull the gimels from their hiding places. Next morning, when the gimels are back in their tray, the carver cannot figure it out. He finishes the dreidels. The text works if readers immediately suspend disbelief. The illustrations work from start to finish: they are lively, engaging and smart. The double page spreads that reveal the hiding, then the retrieving of the gimels, pinned to a blueprint-like ground, are terrific. The book is directed at knowledgeable readers. The Maccabees are cited, not explained; there is no further holiday background or information. The end page gives dreidel rules." (Association of Jewish Libraries)