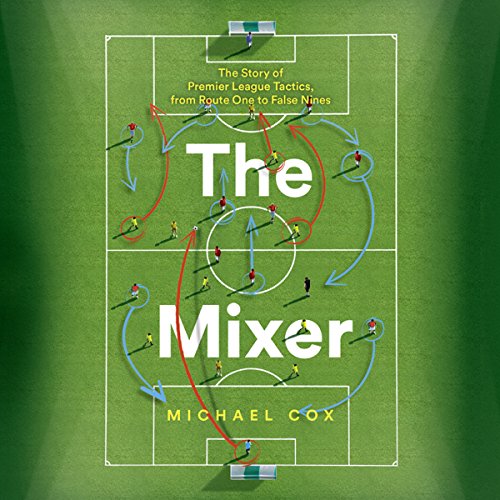 The Mixer: The Story of Premier League Tactics, from Route One to False Nines

An absolutely essential book for every modern football fan, about the development of Premier League tactics, published to coincide with 25 years of the competition.

Back in 1992, English football was stuck in the dark ages, emerging from a five-year ban from European competition. The game was physical, bruising and attritional, based on strength over speed, aggression over finesse. It was the era of the midfield general, reducers, big men up front and getting it in the mixer; 4-4-2 was the order of the day. Few teams experimented tactically.

And then, almost overnight, it all changed. The creation of the Premier League coincided with one of the most seismic rule changes in football history: the abolition of the back-pass. Suddenly defenders had no get-out-of-jail-free card, goalkeepers had to be able to field and play the ball and the pace of the game quickened immeasurably. Tactics evolved dramatically, helped by an increased foreign influence.

The Mixer is the first book to delve deep into the tactical story of the Premier League and take a long view of how the game has developed over the last quarter century. From Ferguson's directness to Keegan's relentlessly attacking Newcastle outfit to Mourinho's cagey, reactive Chelsea, all the way to Ranieri's counterattacking champions, The Mixer is one of the most entertaining, rich and knowledgeable football books ever written.

"Intelligently written. Impressively researched. Fascinatingly addictive. Michael Cox is like a cartographer, remapping the landscape of the Premier League so we see the contours of it afresh. That's some feat." (Duncan Hamilton, two-time winner of the William Hill Sports Book of the Year)
"Michael Cox provides brilliant tactical context to our favourite moments of Premier League nostalgia. The Mixer is as entertaining as a Wanchope dribble, with the authority of a Shearer finish and the panache of a Cantona celebration. And you may even learn to love Tony Pulis a little bit.' (Ben Lyttleton, author of Twelve Yards: The Art and Psychology of the Perfect Penalty)
"This is more than the impeccably researched and authoritative account of the English game's tactical evolution over the last quarter of a century you'd expect from a master of the genre. It is also packed with anecdotes and stories - some familiar, others far less so, a number of them hilarious - which give it flesh and ensure this book will be revisited many times, not just by those looking for imaginative and sometimes profound analysis, but by any football fan who enjoys a good tale well told." (Philippe Auclair, author of Cantona: The Rebel Who Would Be King)

What listeners say about The Mixer: The Story of Premier League Tactics, from Route One to False Nines

Loved it. Has to be among the best football books of all time. The narrator captures the emotion of the player/managers statements by doing a good job of switching accents

It was an excellent book! Felt I lived through those moments, and recall some of those with nostalgia. The chapters were well detailed and more importantly, easily understandable. Must read for all football fans

Loved every minute of this. Amazing imitations of the voices of managers, players and the like. Plus an amazing ability to note the significances of smaller key moments in games and the PL. Legendary audiobook!

Extremely wide and a connected explanation

The story if I may call it that is laid out so beautifully. Multiple events connected with beautiful insights to understand the various contexts to the game and the league I so dearly love.

A must read or listen for fans !!

A great book that focuses on tactical development of EPL but doesn't ignore other aspects of the game like man management and fitness.
A must read to understand football holistically.
The narrator is good but he changes accents to talk as different players and managers which is kinda weird and funny.
Regardless, its a gem of a audiobook

One of the greatest football books

Even if you are not very into the Premier League, this book is absolutely mind-blowing

Brilliant book, really learned a lot about the prem and the reader’s performance was really good apart from a few pronunciations of names. Highly recommend!

The generic accents are quite irritating to people who know what these people actually sound like. Whilst I'm not sure the actor has heard all of them. For example Leon Brittan is from East London not Wales!!

Such a brilliant book, really interesting, but the narration kills it. The narrator does an impression with every quote, so you have his attempt at French, Dutch, northern English, you name it, he thinks he can do it - and he can’t. We’re talking world famous football folk, reduced to awful takes. And it’s infuriating. Wenger - a man who can speak six languages - reduced to “err, ow you say” style impressions from the narrator. There’s just no need. Just read the book, man, it’s brilliant, save your crappy Allo Allo style impressions for someone who cares.

This was very informative and quite humorous. Really enjoyed listening to it. Fans of several teams, especially Man Utd, Arsenal and Liverpool will learn a lot about their teams' tactics over the last 25 years.

One of the greatest football books ever written!

Perfectly connects tactics within the English game from 1992 to the present day. Very easy listening and thoroughly enjoyed from start to finish!

It took me a long time to get through The Mixer. I'm a big fan of Michael Cox's writing, and thinking, on football, but Colin Mace's decision to do accents when quoting footballers and managers consistently took me out of the narrative and had me blinking in amazement at the weird, stereotypical accents. He does a handful of the voices rather well, to be fair, but more often than not he simply puts on a generic Dutch or French or Spanish or Italian voice. Even if the voices were well-observed impressions, I suspect I'd still have found them distracting, but as they're often entirely unlike the actual people's voices, it was very hard to listen to.

If that's not an issue for you, this is otherwise a typically well-researched and insightful long-form look at the evolution of tactics in the Premier League era.

The narrator's impressions were a bit...under researched/bordering on stereotypes but that can be glossed over...it's just a history of the Premier League. Nothing any more revealing than that. I'm not sure who'd be interested in listening to this. I'm being a tad harsh but I just lost interest by the end!

Good content, albeit purely a story of the Premiership with a bit around tactics. Shame about the feel for the need of some stereotypical, " 'allo, 'allo" type impressions. About the only one missing was Jim Davidson's "Chalky White"..."where is dem warty melon"....some were even assumptions of the accent....I found myself rolling my eyes on many occassion when the "impression" kicked in...

The accents are soooo distracting

Really interesting content but the many quotes in a multitude of accents deserves a yellow card at least.

Firstly I really enjoyed this book. It covers the premier league in a very detailed way.
Personally I found the earlier chapters about the back pass changes more interesting.

I feel that if you follow the premier league and the guardian podcast you will have most of the info found in this book. However it's still very entertaining. Glad I purchased it

Developments from rule changes, player styles and innovations and manager tactical inventions all covered.The changes inspired by individual genius is inspiring. Freedom to invent. The different voice interpretations work well ... they are obviously only approximations. No reason to expect tape recording accuracy and they casually break up the monotony of a single voice and lift non fiction into a little bit of theatre.

This was a wonderful book. A different look into the history of the Premier League. It was a pleasure to know how things panned out in the previous years from a tactical way. The rise and downfall of teams.

A fine summary of EPL tactics & nostalgic moments. The narrator's Dutch impressions are a highlight.

PUT IT IN YOUR BOOKSHELF!

This book was incredible, absolutely everything you could ever want to know about the Premier League and the tactics that kept us enthralled with it, I loved it, the Narration was some of the best I've ever heard, I have ordered this book to re-read it in the flesh, I can't recommend it enough if you love Football and Tactics. Cheers for a brilliant time.

This book is amazing for casual fans or fanatics! Runs through a whole history of the league, the tactics and the most influential players and coaches. Will be relistening again at a later stage!

An excellent book for all football fans!

I had heard a lot of good things about this book and sometimes, you worry that the hype will deliver very little in terms of quality.

This book is one of the best football reads you will be able to lay your hands on any time soon.

Come for the excellent analysis of the Premier League’s great teams, players, coaches and tactical development.

Stay for the unintended hilarity of impersonated foreign accents.

Must listen for anyone with a passing interest in the Premier League.

I loved this book and his it went through the changes bought in by players and coaches throughout the premier league. Great for any fan or aspiring coach.