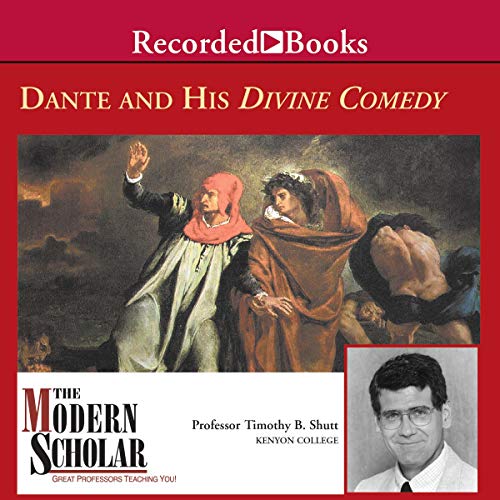 What listeners say about The Modern Scholar

I first listened to these lectures when my wife and I were pursuing our conversion to Catholicism. 14 years later I have a much better understanding of what it means to be Catholic. While much of that understanding was acquired through reading, most of it has been gained by simply living day to day in the Faith. For that reason Dante’s poem has far more to say to me now than it did way back when. And these lectures on that poem, which blew me away with the scope of what I’ll call, for lack of a better term, the Catholic Imagination as exemplified by Dante Alighieri, still blow me away today.

Professor Shutt is a modern academic. As such, he shuns the topics you’d expect a modern academic to shun, gliding lightly, for example, over the fact that Dante puts Mohammed in Hell, among the disseminators of discord. But Shutt wins high marks from this listener for not using a detail like that as many of his fellow academics would—as a brickbat to cudgel Dante, his poem, the Middle Ages, Catholicism and the entire enterprise of Western Civilization. As in his lectures on Medieval Literature, Shutt strives to understand and explain the work he’s dealing with on its own terms. He understands that the Middle Ages aren’t inferior because they failed to grasp the truths we take for granted now. And at times he even goes farther, suggesting (deftly) that perhaps we’d be better off if we embraced a few of the truths our ancestors took for granted.

While the Comedy, along with Thomas Aquinas’ Summa, is perhaps the greatest single written expression of Catholicism this side of Scripture, Shutt takes pains to point out that that, Catholic or not, Christian or not, even religious or not, the Divine Comedy has important things to say to you. True, his surprise that medieval confession manuals for priests contained some deep psychological insights was, for me, more than a little surprising (what does the good professor think confession is all about?) But far more often Shutt is dismantling popular misconceptions and making the case for Dante, his times and his poem.

For instance, while acknowledging that the Inferno is the most famous of the three parts of the Comedy, Shutt points out that the other two thirds of the work deal with Purgatory and Paradise—with redemption, not damnation—and that overall the poem is far more positive about the human situation than many of us suppose. And no wonder; Dante was writing in the immediate aftermath of the birth of Thomistic philosophy. It’s the sort of insight at which Professor Shutt excels, at once illuminating the poem and its cultural context and uprooting any faulty assumptions you or I may have been harboring.

Finally, there is Professor Shutt’s infectious enthusiasm. His palpable gladness at bringing out a truth or insight, his delight in the beauty of which language and thought are capable. I’ve said it before and I say it again, he’s the kind of professor I wish my kids could have—and I wish I had had.

Lectures certainly, but entertaining as well

I really enjoy the Modern Scholar series, and Dr Shutt's lectures (this and other topics) are educational and liberally sprinkled with wit. Dante's Divine Comedy comes to life as Shutt reaches into the minds of Dante and his contemporaries, tells us the story and some of what was going on at the time. Very enjoyable.

The Divine Comedy is a very deep epic which means that there is much that the first-time reader will miss. Dr. Shutt does an excellent job explaining all kinds of useful information for interpreting, understanding, and enjoying the Comedy at a very high level.

If you could sum up The Modern Scholar in three words, what would they be?

I didnt know the history of Dante or the people he mentions in the Divine Comedy and this explains a lot of it. Great way of understanding why Dante wrote the things he did.

Better than nothing, but not as good as I hoped

This is more of a superficial treatment of Dante than I had hoped for. Professor Shutt basically summarizes the storyline, explains some of the passages rendered obscure by historical distance, and offers a few of his own interpretations along the way. I had hoped for more insight into the philosophical and theological issues raised by the book.So, if you want a brief, but somewhat shallow, introduction, this is a good resource. If you want something more penetrating and analytical, or an awareness of the major scholarly questions debated about the text, this does not rise to the occasion.

Occasionally, Audible.com offers a discounted price on academic lectures about various literary, historical, and scientific events. After reading “The Divine Comedy” (translated by Charles Norton) Professor Shutt’s lectures are a valuable guide to a better understanding of Dante’s masterpiece.

The origin of the story seems simple but its meaning is complex and revelatory. Dante Alighieri is a wealthy aristocrat that represents a major leadership faction in 13th century Italy, the“White Gulphs” which are vying for power with the Ghibelline. Their conflict is over the integrity of the Pope in Rome at the time of relocation of the papal enclave to Avignon, France. The move occurs in 1309 and lasts for 67 years. Pope Boniface VIII sides with the Ghibelline to overthrow the Gulphs and excommunicate Dante. Dante loses his political position, his wealth, and coincidently, the life of the woman he loves, Beatrice. These crushing events in Dante’s life compel him to complete and publish (between 1308 and his death in 1321) what Shutt calls the greatest single piece of literature ever written.

Purgatory may be a way-station to heaven for a believer that is cleansed of their sin or an eternal home for the non-believer or pagan. Hell is perdition for eternity with no surcease of pain or opportunity for escape. Heaven is a place of eternal rest, peace, and love.

One is overwhelmed by Dante’s genius whether or not a believer. Shutt gives one a better understanding of who Dante was and why “The Divine Comedy” is a classic.

It’s always great when you can hear the excitement of a lecturer in the tone of their voice. I enjoyed this course. I also recommend the Great Courses lecture on Dante for persons interested in a deep dive.

Good pace for a lecture series

only criticism is in post production. sometimes his voice gets so quiet I can't hear the end of his sentences.

great balance between giving background, interpretations, opinions, and yet keeps it moving so there aren't long boring periods stuck on one canto

Professor Shutt has an easygoing lecture style that keeps you engaged the entire 8+ hours. Outstanding commentary and background even for those who've previously studied Dante and his timeless work. I look forward to purchasing additional work by Prof Shutt and The Modern Scholar series.