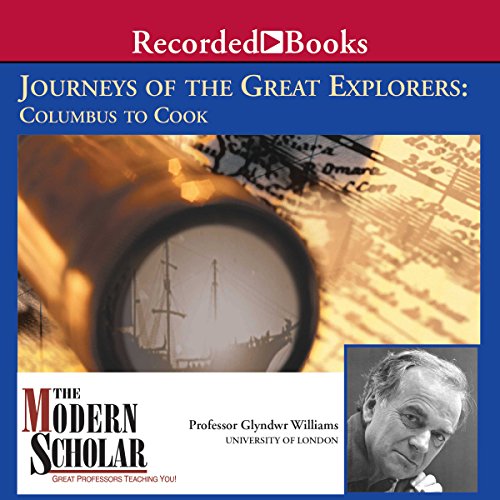 One of the most dramatic periods in world history is the age of Europe's discovery of the world from Columbus and da Gama in the late 15th century to the voyages of James Cook in the 18th century. The extent of the changes can be seen by comparing the pre-Columbian maps, which showed no knowledge of either the Americas or the Pacific, with those of 1800, which in terms of projection, scale, and content approximate today's maps.

In these lectures, the most important discovery voyages, the individual characteristics of their commanders, and the endurance of their crews will be described. Interspersed with accounts of individual voyages will be lectures that explain the more general and technical aspects of the voyages: improvements in ship design and navigation, constraints of wind and current, living conditions on board ship, and problems of health and discipline. Special attention will be paid to the controversies that developed from some of these voyages.

What listeners say about The Modern Scholar

An enjoyable course in Sailing History

This series gives both a great perspective on the history of 'The Great Explorers' as well as an insight into the lifestyle of the early sailors. Prof. Williams is an authority in this field of history.

This is a great starting point if you would like to refresh your memory on the journeys of these famous explorers and from here you can search through Audible for other great books that detail these sailors lives in more detail.

I am surprised that Audible has not made more of his books available in Audio format - a particular favorite of mine is "Voyages of Delusion: The Quest for The North West Passage"

The Modern Scholar 'lecture' style of presentation allows you to fit a single lesson into your schedule, be it exercise, commuting, falling asleep etc.

Prof. Williams provides an excellent overview and insight to the age of exploration. I found his deliberate delivery very helpful in better understanding and retaining the material. Very interesting and entertaining.