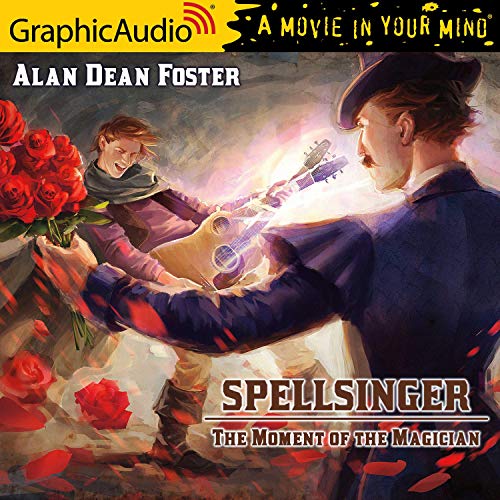 The Moment of the Magician [Dramatized Adaptation]

In his continuing quest to find his way back to his own world, Jon-Tom the spellsinger must face off against a magician with sinister intentions

Far to the south of the peaceful Bellwoods, where Jon-Tom the spellsinger continues trying to master the art of turning music into magic, a sinister force has awakened: a magician with great ambition and unheard-of power. He summons lightning to do his bidding, commands an army of faceless flying demons, and claims to come from another world — one Jon-Tom suspects might be his own. If he can somehow reason with the unknown magician, perhaps they can combine their talents and find a way to go home together.

Wary of this new wickedness, Jon-Tom’s suspicious mentor sends the spellsinger and his companions on a journey to the southlands, assuring him that the land they are to visit is “tropical, friendly, and largely uninhabited.” As Jon-Tom learns all too often, in this mysterious world much will be proven catastrophically wrong.

What listeners say about The Moment of the Magician [Dramatized Adaptation]

But this is not the entire book. Can not tell you the number of time I have read this in paperback. And a lot of the book was left out. Skip these abridged books and read the paperbacks...

Loved the books in my younger years and finding myself mesmerized with the graphic audio version or interpretation of it immensely entertaining in my waning years.

I was a teenager when I stumbled across the Spellsinger series (many moons ago).
I LOVED THEM!
As paperbacks became less and less a medium it was one of the few series that I kept.
I was delighted to see that (finally) an audible version had been developed.
I realize after listening to the first few that it COULDN'T be an actual reading (well it could but it might have come close to some copyright violations).
DEFINITELY I'm this exact medium it would have crossed some lines.
So by doing an "adaptation" of the story and only using songs with no copyright (like Ring Around the Rosies) and in other places doing original scores and not mentioning the actual song (like inferring JonTom played Stairway to Heaven when he needed to get out of a well but never saying that's what he was playing).
Very very well done.
of course I would have LOVED if it could have been produced exactly as written...
but I feel like this was as close as it could come without the lawsuits popping up faster than thieves in a dark alley behind a pub right after payday.