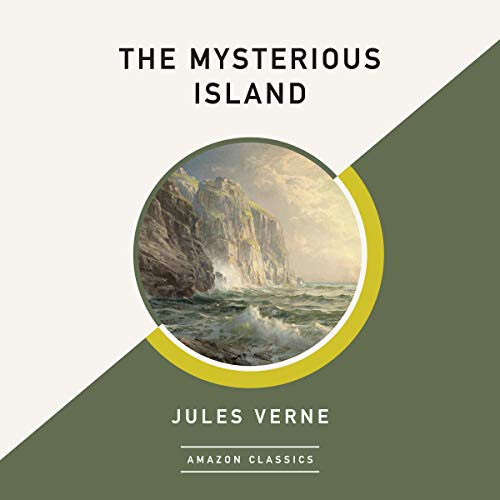 After hijacking a balloon from a Confederate camp, a band of five northern prisoners escape the American Civil War. Seven thousand miles later, they drop from the clouds onto an uncharted volcanic island in the Pacific. Through teamwork, scientific knowledge, engineering, and perseverance, they endeavor to build a colony from scratch. But this island of abundant resources has its secrets. The castaways discover they are not alone. A shadowy, yet familiar, agent of their unfathomable fate is watching.

What unfolds in Jules Verne’s imaginative marvel is both an enthralling mystery and the ultimate in survivalist adventures.

What listeners say about The Mysterious Island (AmazonClassics Edition)

I think this is one on my favorite Jules Verne books. It’s full of adventure, twists and turns. The narrator was superb! I wish I could have given more than 5 stars.

Fantastic edition of Jules Verne’s classic. This version of the read-aloud adds shine to the ageless diamond. Don’t get shortchanged by other, condensed versions. Giant 5 stars across the board!

The Mysterious Island is my favorite story! Verne neatly tied several loose ends and avoided many of his typical cringe-worthy judgments.

The story is a let down

I did not realize I was going into a “classic” book. This is not a survivor story. This is a story about how every person shipwrecked knows everything from iron work to Chemistry and when they do not know what to do, a god like figure gives them help.

The narrator was great. That was the only positive.

There are a few things that happen quicker than it seems reasonable to expect, but that does not make the book any less interesting.
Great listen

Not his best, but good nonetheless.

I listened to this one after first having listened to 'Journey to the Centre of the Earth' and '20,000 Leagues Under the Sea' - if you haven't already, I'd recommend you check out '20,000 Leagues...' first as fairly crucial parts of this story won't make sense otherwise.

I liked the aforementioned two a lot more than this one, but I still enjoyed it immensely, though much more so towards the end. The first half of the book did end up becoming somewhat difficult to get through. I love the idea of surviving on a desert island and the struggles and perils that come with that - this book is very much surviving on a desert island but without the struggles and perils, which all in all means that a lot of the excitement, suspense and thrill is missing, since the survivors don't need to fight for food or resources, but rather have everything thrown at them. Not to mention the internet is with them in the form of a single man - a man who manages to be a master engineer, chemist, botanist, psychologist and military tactician all at the same time. An unsettlingly unrealistic element that leads to yet further lack of pressure upon the survivors and thus excitement for the reader/listener.
On top of that, there's Jules Verne's absolute lack of emotion, sense or empathy in the way he refers to other animals. Perhaps this was just the generally held view at the time of writing the novel, since that was almost 150 years ago now. But to listen to the way he talks about some animals in such a cold, insensitive way was, at times, disturbing for my modernised brain.
Nevertheless, despite its flaws, I stuck through it and was rewarded at the end. As I said, the first half could be hard-going at times but it just ended up getting better and better, and I couldn't think of a better climax, nor emotional and perfect ending for the story with the way it brought some of Verne's past work into it.

So all in all, I'd 100% say give it a go. If you find the first half tough as I did, bear with it and keep going because it'll be more than worth it in the end.

This was a well executed classic!

The book held my attention from the beginning to the end. Highly intelligent, adventurous, an all around excellent story.
The gentleman that narrated it is top notch as far as I'm concerned ... good meter, tone, inflection, and at an excellent pace!
r/ boomer

This was a good story. I felt like it was a attempt by Verne to captalize on his previous book so the story was "forced" and not as good as his former work. Good reader though and worth the 20+ hours to hear.

if you are looking for boring

if you are looking for boring this is the book for you. the storyline is very slow and uninteresting. the performance is not entertaining either

I love most stories by Jules Verne but not this one. It’s less of a story than a pedantic book about nature. The world building is unimaginative, the characters are flat and uninteresting, the style is tedious. The performance is workaday like an instructor giving a lecture. I stopped after a few hours and don’t know if something interesting happens in the second half.

This one took me be surprise after i bought it on a whim. The narrater does such a good job with the individual characters (The sailor my personal favourite) that you cant help but feel present in their adventure. Coupled with Jules’s brilliant storytelling its a must listen.