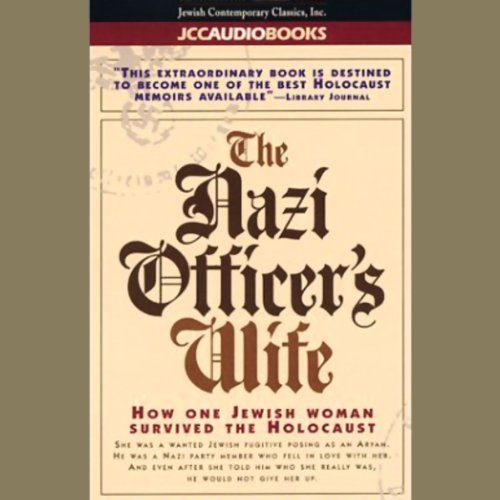 Edith Hahn was an outspoken young woman in Vienna when the Gestapo forced her into a ghetto and then into a slave labor camp. When she returned home months later, she knew she would become a hunted woman, so she went underground.

She emerged in Munich as "Grete Denner". There she met Werner Vetter, a Nazi Party member who fell in love with her. Despite Edith's protests and even her eventual confession that she was Jewish, he married her and kept her identity secret.

What listeners say about The Nazi Officer's Wife

I felt as if I was sitting across the table from Edith listening to her relive her story with all of its emotion, stress, and fear. I had read excellent reviews of the book and am so glad that I listened to it instead of read it. The narrator made each character's voice so true and unique. Each sigh and pause was perfect. I could hardly stop listening.

You will not be disappointed!

The story of Edith Hahn Beer is just one of thousands of stories of survival that came out of the holocaust. Each story is one of courage, intelligence and luck. Edith's story is no exception. She did everything she had to do to survive and we are all lucky enough to be able to learn and be inspired by the incredible actions of this woman. The narration was exceptional, Barbara Rosenblat really made Edith come to life. As you listen, you feel her fear and her pain. An excellent listen.

This is one of those books that you wish would never, ever end. Narrated beautifully, you think the narrator is telling you a story just to you. Do yourself a favor: download this book. You'll thank me. (By the way, this is the only book I've downloaded that I felt compelled to review).

Here is the story of a young Jewish woman from Vienna who, by what might well be divine intervention, survives the Holocaust as a "U-Boat," a term the author describes as living openly in Nazi-occupied Europe with no one knowing you're Jewish. She marries a German officer and Nazi party member. She survives the war, but this is still a life filled with very sad, and indeed tragic events. A compelling read: Once you start this audio book, you won't want to pause or stop it.

This was worth every penny. An excellent story of bravery and survival. If you like this, you might also like Flory- a tale of another young woman who survives the brutality of the Nazi regime. Audible also sells this title.

Should Be Read By More People

This is a fascinating story that reminds me of a good spy thriller. However, it is a true story and gives a unique perspective on the world for those that lived inside the Nazi empire, particularly what it was like for a Jew in Austria. Highly recommended.

I felt engaged by this book as I listened but I was left with a sense of sadness when the story was over. Survival at any cost is hard to do and very hard to hear about.

An incredible story that explores the complex nature of people who live with in times of chaos and confusion. No stereotypes here, but a true telling of people and how they manage through the war. One of the very best audible selections that I've listened to.

Wonderful read. What a brave women Edith was!!!!She is truely one of the unspoken heros of her day. We need books like this so we remember.

Great book, made even better by the amazingly talented narrator. It is difficult to remember it is not the author herself narrating.

Listed to this whilst travelling from Cumbria to a GP Practice in East London and the journey just few buy. That the story is true just makes the story the more incredible. As you get to know the characters and see Nazi Germany from a frightened housewife?s point of view you get perspective. Not every one in the story is bad, and many are not good at all, but they are all so real and so ordinary. You see the risk, the helpless endurance when all around you hate. You see how bad things can get and how grateful we can all be for the simple safety of our homes. It left me wondering if in the end, I could have come through what she came through with as much dignity and humanity. It also on a personal level, without getting all weird about it, made me reflect on suffering. How in the end it?s so individual. Millions might be suffering, but its millions of individuals just like you and I.

I have hundreds of Audible books now as I have been a member since only Audible.Com existed, and this is still one of my favourite listens.

A fantastic story of courage

This is my first purchase on Audible. I am delighted that, by chance, I found this amazing book, beautifully and powerfully written, and brilliantly narrated. The characters come completely to life. It's hard to believe that someone had the courage to survive such an ordeal, yet it is also full of hope. I can't recommend it highly enough.

A fascinating account of how one Jewish woman survived the war in Nazi Germany, with the help of friends and false papers and sheer determination, ending up married to a Nazi officer. It was marvellous to learn more about those people who were prepared to help rather than look the other way. Her life was very hard and she must have been on a knife edge every single day but there is still humour there and an immense amount of courage.

Listen to this to believe it...astonishing.

What an amazing story. It unfolds slowly but the tension keeps building until it starts to feel like fiction. Such details of the buildup of the Nazi terror and killing machine seen experienced by Austrian citizens I had never realized, vividly brought to life.
I have just spent (July 2013) a few days in Vienna where the tour guides don't even mention the war (except how draconian the Versailles Treaty from WWI was). No mention of the Holocaust. I couldn't believe it. So stories like this one need to be told and need to be heard. The narrator used many authentic voices - keeping me enthralled.
If I had been editing this before it went to print, I would have encouraged more detail about the author's life after WWII. That's my only complaint - it wasn't long enough!

A great listen. Not too fanatically anti-German and very moving.

This is an amazing book - I've been hooked on it since the beginning. Wonderfully written and beautifully read. Edith is such an amazing women - full of strength and courage.

What a fab book

This book was really great to listen to. It allows you to try and imaginge what it must of been like for Jews during the was.It was also nail biting stuff on several occassions. A definate must have.

This is one of those rare books that becomes part of the reader, and remains with us forever after. It is simply, perfect. Thank you to dear Edith and Angela for sharing their story with the world.

A fantastic story, well read and well written. A must for 2nd world war historians.

an intimate insight into this amazing woman's life

wonderfully read, beautifully written, I was hooked after a few minutes.

Survival - do what it takes

No wonder it took 30+ years for this story to come out. The horrors need to be told by these brave survivors, although most have died.