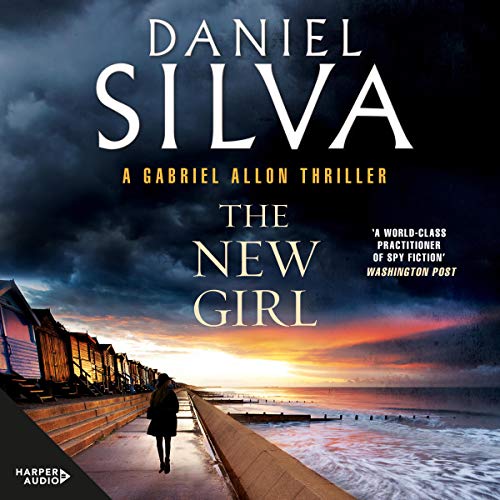 From the internationally best-selling author of The Other Woman and House of Spies comes another stunning thriller in his latest action-packed tale of high stakes international intrigue.

Now you see her. Now you don't. The New Girl. A novel of intrigue, betrayal, and revenge.

At an exclusive private school in Switzerland, mystery surrounds the identity of the beautiful girl who arrives each morning and leaves each afternoon in a heavily protected motorcade fit for a head of state. She is said to be the daughter of a wealthy international businessman. She is not.

And when she is brutally kidnapped across the border in the Haute-Savoie region of France, Gabriel Allon, the legendary chief of Israeli intelligence, is thrust into a deadly secret war with an old enemy that will determine the future of the Middle East - and perhaps the world....

Extraordinary acclaim for The New Girl:

"One of the greatest novelists the genre has ever known.... The New Girl is as close to perfect as you could ever hope for a thriller to be." (The Real Book Spy)

"The New Girl is a brilliant novel.... Eye-opening and a joy to read." (Bob Woodward)

What listeners say about The New Girl

a brilliant portrayal of the happenings in the world and a wishful thinking for future.

A complex story with many timely connections to the world both real and imagined. Daniel Silva is to be complimented as is George Guidall for another fine narration. Thank you for an engaging and diverting audio book, may they continue.

Daniel Silva always entertains and narrator George Guidall is still one of the best in t he business. As we've come to expect, this fast paced installment in the Gabriel Allon series has it all, kidnapping, assassination, mystery and intrigue on an international scale and set in multiple locations around the world. A very enjoyable series in the top tier of my library.

Another good book by Daniel Silva

A mix of true events and fiction, great plot and international intrigues. It is a book hard to stop listening with twists and turns. I don't think Saudi will ever be in alliance with Israel, however, it made a good story, who knows, when power and money are involved anything can happen and if it does, would be a blessing for the world.

Couldn't stop listening to it, may be fiction but all to chillingly believable! Beautifully read by G Guidall, one of my favorite narrators!

This book was well written, and I very much enjoyed the narrator. I was also rather fascinated by the informative epilogue. Definitely recommend.

Silva remains the top writer of this genre.

Every bit as gripping as the previous Gabriel Allon novels. George Guidall does his usual good job of narrating and milking every ounce of suspense. Next one, please.

I've listened to every one of Desilvas book and this one is just fabulous
Very topical subject and a great story bringing back many of his established characters
I am amazed at Desilvas ability to involve the reader in his characters personality ,you really feel you know them and Guidall's typical breathless style and delivery adds so much to the intrigue.
So many typical Jewish one liners,so much humour ,amidst a totally deadly scene.
Oh that it could all be true and we could see some hope of a solution to the middle east quagmire .
you will love the book
But was it....... a sedan or a street car ?

Another exciting read by Daniel Silva

Loved it and spent a while listening to the storyline in short stretches. Looking forward to the next book.

Smooth narration with a cleverly woven plot. The best in the series to date for the legendary Gabriel Allon. Looking forward to the next release.