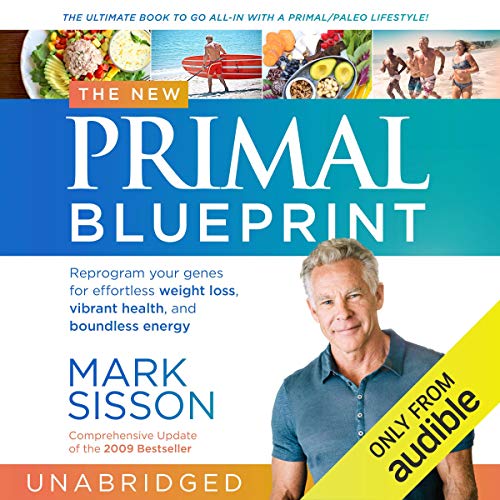 Mark Sisson's 2009 release of The Primal Blueprint was the catalyst for the primal/paleo/ancestral health movement to gain mainstream awareness and acceptance. Both the hardcover and paperback editions enjoyed a seven-year run at the top of the primal/paleo charts and selling hundreds of thousands of copies. Sisson, publisher of the acclaimed MarksDailyApple.com, the acclaimed and most-visited primal/paleo blog, has spent the past six years diligently researching and evaluating recent the most up-to-date science and reflecting on thousands of users' experiences going primal. The second edition of The New Primal Blueprint offers a comprehensively revised, expanded, and updated message from the original runaway best-seller.

The New Primal Blueprint serves as the ultimate road map for anyone wishing to make the shift from flawed conventional wisdom about diet and exercise to a healthy, happy empowering lifestyle patterned after the evolutionary-tested behaviors of our hunter-gatherer ancestors. The book details the 10 immutable Primal Blueprint lifestyle laws that enable empower you to reprogram your genes to direct in the direction of weight loss, health, and longevity.

What listeners say about The New Primal Blueprint

I'm a big fan of Sisson. He knows his stuff and he updates info as he learns more. My problem is with the performance. It's honestly TERRIBLE!

I've done this type of work. It's tough to do. Mr Kearns hasn't done his homework. He adds odd pauses, gets hung up mid-sentence, incorrectly pronounces common words, and- worst of all- adds an annoying chuckle to his voice at completely inappropriate times.

Mark Sisson's work deserves a much better presentation. I'm profoundly disappointed! Is Brad Kearns a friend of a friend at Primal, perhaps? I just can't understand how he was given this work.

Make 'and' now back to the text' a drinking game

This is the first book I've listened to on Audible that I wished I had just purchased in hard copy instead. The narrator adds his own content, opinions and emphasis instead of just reading the book. It sounds more like a podcast than an audiobook.

Kearns sounds like a nice guy, but he mispronounces words regularly, inserts random pauses, peppers the narration with "uh"s, and adds awkward laughs to serious messages from the author. Just not high quality as you'd expect from everything else Sisson touches.

So at first the editorial comments the narrator threw in bugged me. Then, he states later in the book that the narrator is also a co-author. This made his comments make more sense to me and not just some narrator throwing in his two cents. Very informative book and easy to follow.

Loved the material. The narrator was sometimes annoying with his side comments. Overall worth the listen.

Amazing information but nails on a chalkboard

Life-changing information. Using this book I’ve gained more mental clarity and sustain energy but the narration is pretty rough. I didn’t know one could sound so condescending while reading a book.

A very educational, including the occasional commentary from the narrator, "...and back to the book..."

this could be so good if not for the narator

the book is great, the narrator is incredibly unprofessional. I would recommend to buy the book, not the audioversion
he is constantly adding things, chuckling or just mainly sounds like a teenager reading a book

Title says it all, the guy reading this book is extremely distracted and constantly adds his own irrelevant input.

You won't regret it!

very interesting and a bit of an eye opener. this book has helped me alot with my diet and training.

Great book, but so hard to listen to the narrator. Honestly the worst narrator I've ever listened to.
Particularly the footnotes are read as if he's improvising and making stuff up.

excellent companion to the original book. if you are looking for an easy and enjoyable way to lose weight, get back to full health and get seriously fit as well as look good naked this is it

I have been on a journey of self-help for many years . I have read many books and listened to hundreds of YouTube videos, however this is the most realistic programme I have ever encounteredyou care about your health and mental well-being. It’s been written with humour and will appeal to people from all social and educational background. In the past I’ve taken certain bits from certain people however this is a complete Bible. My only question mark is over this amount of protein recommended. Sadly the opinions are very divided ends what this book recommends is very much at a lower end of the scale so I will need to do some more research !

Life-changing! Now back to the book...

I've been skinny fat for over a decade. Been on crash diets, vegan diet, high protein diet - you name it. Within a month of following the advice in this book I have lost 2kg of fat and it's noticeable. And the best part is that I haven't felt for a second that I'm sacrificing anything. Love the book, love the author and I even loved the narrator! I like how he editorialised and I enjoyed his laughter and quirks. But I did slow it down to 0.85 as I found that he speaks far too quickly, especially given that that you want to understand all the information given. The book is highly prescriptive and can be followed immediately. Honestly I think it's the best non-fiction type book I've ever read and I can't see how I won't be following the principles for the rest of my life!

I'm still staying with plant based foods because I can get grass fed easily. The only time I will eat fish is after I've caught it.

Very good book, makes sense just need to implement. Well worth a listen to, should have been a PDF though. Although saying that, on the last tow books the PDF have been incomplete.

To in depth for me

as a nutritional novice the detail in this book blew my mind. my personal preference thats all other than that it was very enlighten.

I truly enjoyed this audiobook by Mark Sisson. Great idea for Christmas gifts for my loved ones. this book changes lives, definitely changed mine.

I almost didn't get this book because of the bad rap the narrator got in reviews. I got it anyway. Brad Kearns style and knowledge adds to the narration and turns what otherwise could be just a reading of the book into a friendly conversation type of presentation.

The advice in this book is quite simply revolutionary, and yet in line with the science, despite what public health policy would sometimes lead us to believe. Purchase it. Implement its advice. And enjoy the benefits for life.

Really enjoyed the book. I’ve implemented Mark’s strategies and life’s good. Took about 4 weeks to adapt but now it’s like I’m a different person. Would prefer to listen to Mark speak than this bloke though. IMO.

Great book, but a little frustrated by the narrator’s constant self-confessed ‘editorialising’. If I wanted the narrator’s opinion on every few paragraphs, I would have downloaded his podcast, not this book.
A bit annoying, but overall worth listening to.