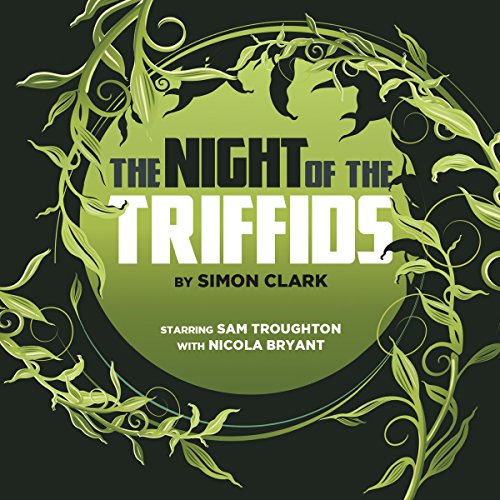 The Night of the Triffids

On the Isle of Wight, a colony of survivors wakes to a world plunged into darkness. Before long, the triffids, thought safely out of the way on the mainland, attack....

In John Wyndham’s classic best seller The Day of the Triffids the world has been overwhelmed by killer plants. As the novel ends, Wyndham’s narrator scientist Bill Masen is escaping, with his wife and four-year-old son, to the Isle of Wight where a small colony of survivors is holding out. Simon Clark’s sequel picks up the story 25 years on.

The survivors are safe, for the time being at least, on their island, where they have continued efforts to combat the triffids, while also striving in various ways to build a new civilization. Elsewhere in the world, similar colonies cling to survival, while the triffids persist in their attempts to destroy humanity.

One morning Bill Masen’s son, David, now grown up, wakes to a world plunged into darkness. Now, the triffids have an advantage over humanity.

This book builds upon Day of the Triffids well but takes a more human oriented approach while the first book was more oriented toward the overall situation in the world and the growing trouble with Triffids. I found this book ended surprisingly soon and was a little unsatisfying in that way. It does progress through the story of Triffids however

I so wanted this to be great...

To those who are still wary of meteor showers I could not recommend this story because this is all it is, a story and not a great one.

The father and son conversation about the human races future if when machinery Etc can no longer be maintained.

Was The Night of the Triffids worth the listening time?

As a story yes, as a relivant sequel, no. But lovers of the original would be tempted by its title.

Just too many fortunate events for our lead character to survive!
A poor spin off. Now I've listened to it, it would be difficult not to imagine any other evolution pathway. I'll just stick with the original.

It was far too radio play for my tastes, sound effects etc. Didn't feel like an unabridged audiobook at all. story was okay, but felt really short.

I quite enjoyed this story it was a good novel it had nice music and was a good sequel though its pacing was a little too fast.

Night of the Triffids took me straight back to reading John Wyndham's original, as well as watching the TV series - still one of my all-time favourites. Simon Clark has the talent, courage and skill to do both the original idea and his sequel justice, and I loved this. I hesitate to call it an audiobook, it is far more than that - the production is superb and fully draws the listener in to the world of the triffids. Due to one thing and another, I struggle to hold 'proper' books, and rely on audiobooks for my literary fixes. Out of the hundreds in my library, this is the clear winner. The script, actors, sound effects and editing put me right there in the action in the same way the TV series did oh so many year ago (eek!)

The best thing of all is that I've only scratched the surface of Simon Clark's books. I can't wait to devour the rest and feel like I've found a treasure trove!

I enjoyed this sequence to the day of the triffids, been waiting a long time to read it. hope there will be a 3rd.