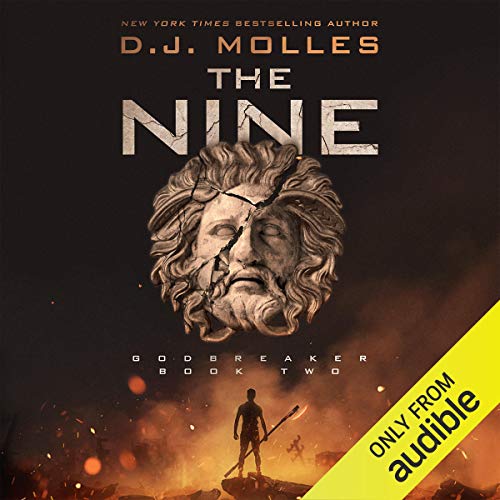 Change the tides of history.

A tall order for a runt named Perry McGown and his ragtag band of friends. But Perry is bound and determined to complete this mission, no matter the odds. He must prove himself in the face of a gathering storm of powers beyond his imagination.

Accompanied by a ferocious ex-legionnaire named Stuber, a con artist named Teran, and a tinkerer named Sagum, Perry barges his way into a world where nothing is as it seems, old truths become lies, and myths become reality. In his quest to find "The Source", he must rapidly learn his place in the new order of things, or he and everyone he knows will be destroyed.

And also, possibly, the entire world.

What listeners say about The Nine

MOLLES HAS THE BEGINNINGS OF AN AWESOME NEW SERIES

DJ Molles has penned a 3rd riveting series that easily rivals his The Remaining and Lee Hardin series. This world is based on an earth 500 years after a world ending apocalypse. Humans are subjugated by genetically enhanced humans known as demigods. The demigods force the best human warriors to fight in a war designed to kill off the best human warriors and keep the human population thinned down to prevent rebellion and human uprising. Perry McGown is a halfbreed human/demigod with demigod abilities and a kickass team consisting of an excellent thief, a genius engineer, and a special forces style Legionaire deserter, and a sentient android. All learning teamwork and trust while trying to find a fabled weapon the demigods are deathly afraid of.

genre fiction writers are all into the premise that every little idea they get is worthy of an epic 10 volume story arc... SciFi Fantasy is in the doldrums of repetitive, ponderous, poorly conceived 'epics' ..... it's enough to make me switch to nonfiction for a few years....

Grab your "oh shit" handle, you're in for a ride!

Dj Molles is a Story Teller, pure and simple. Part of the fun of reading is trying to figure out where the story is taking me and Molles surprises me every time.

This was a great sequel and I certainly did not see this coming. I loved the new characters. Especially the history revealed and experienced through their stories.

My only regret is reading this and Defiant so quickly and back to back!

also, did you know that Christian Rummel has romance novels in his repertoire? Phew! Get this girl some water!

Great except for voice acting hiccups

They were a few times that the narrator got confused about the voices he was using for which characters. He used Stuber‘s affectation for Segan several times.

Great book, great voices, loved all three! I'm sad it's over. Maybe a prequel series in this world?

I really enjoyed the book, just not as much as the first,, definitely still going to listen to the next.
Narrator did amazing.

This story line is great! I am starting to like the main character. I didn't care for him in the first book but he gets his head out of his butt in the second book.

Everything I hoped for!

If you enjoyed Book 1 you won’t be disappointed by Book 2! I love how these books tap into a variety of different sci-fi and fantasy genres to create a unique world. Highly recommend!

The watcher is awake

wonderful read, it is awesome reading and seeing how much the characters have changed and grown from the first book. Starting the next book tomorrow.

I enjoyed the character development. The author did a good job on their roles.
The narrator is extremely good!
I enjoyed the book